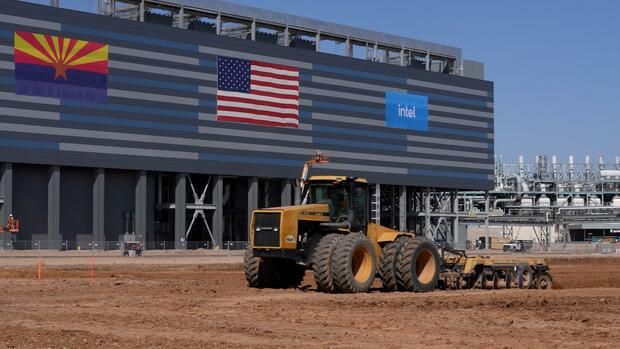 Munich, Dusseldorf The smallest electronic parts still cause the biggest problems in the global economy. The shortage of computer chips will continue in 2022. On average, customers had to wait 26.6 weeks for their orders in March. That’s two days more than February and a new high, according to experts at Susquehanna Financial Group.

The buyers of the chip industry – above all the automotive sector – are hit hard by the lack of chips. According to market researchers, car sales fell by a quarter worldwide in March – not least because the components were missing. Around the world, the assembly lines are always standing still: Mercedes recently announced that it would send 5,600 employees in Brazil on vacation. Work was also suspended at Ford in Cologne and at VW in Bratislava because not enough semiconductors were available.

Not only Europe, but also the USA are fighting against the shortage of semiconductors. Brian Deese, chief economic advisor to US President Joe Biden, estimates that economic output in the United States was one percent lower last year due to the lack of chips.

However, there is good news for the ailing customers of the chip industry. The semiconductor manufacturers are reacting to the supply difficulties with huge investments in additional capacities. According to the industry association Semi, the producers want to invest 446 billion dollars in the construction of new plants and additional production lines. For comparison: This roughly corresponds to the entire turnover of the industry in 2020. The industry association refers to the volume of projects that start in the years 2021 to 2023.

What is striking about investment, however, is the imbalance between Europe and the USA. According to a survey by Semi, America accounts for a quarter of all global investments in the semiconductor industry, at around 111 billion dollars.

Chip companies based in the USA account for a good half of all revenues in the industry. In addition, seven of the ten providers with the highest sales come from the United States. However, they obtain their semiconductors to a large extent from contract manufacturers in the Far East – and they have not been able to keep up with the delivery for more than a year.

Apart from that: The countries with the largest factories, Taiwan and South Korea, are at loggerheads with their neighbors, wars cannot be ruled out – and with them even greater bottlenecks. A good 40 percent of all chips come from the two nations.

>> Read about this: Atomic mirrors should enable the next generation of chips

Governments worldwide are therefore urging chip companies to produce in their own country and thus minimize the risks. The number two in the chip industry, Intel, has already launched billions in investments in the EU and the USA. “All market participants are now concerned with more resilient supply chains,” says Peter Fintl, chip expert at the consulting firm Capgemini. “In other words, everyone tends to be confronted with rising costs. Therefore, the chances are greater than ever that the necessary measures will be implemented on a broad basis in the industry.”

According to Semi, additional production capacities for around 56 billion dollars are also being created in Europe. However, this corresponds to only 13 percent of global investments – and is therefore less than the EU is aiming for. Commission President Ursula von der Leyen wants to double the EU’s share of world production from less than ten percent to 20 percent by the end of the decade. To do this, significantly more would have to be built in the EU than previously planned.

After all, the two largest European chip companies want to invest significantly more this year than in 2021. The Franco-Italian STMicroelectronics has announced that it will almost double its investments. According to the market researchers at IC Insights, the Munich-based Dax group Infineon wants to invest 40 percent more.

Because microchips are still in demand: According to market researchers at Omdia, sales in the industry shot up by around a quarter to $587 billion last year. That is 100 billion more than in the previous record year 2018. For the current year, the industry association World Semiconductor Trade Statistics expects a further increase of around ten percent. Management consultancy McKinsey predicts that the industry will grow by up to eight percent per year on average by 2030.

Billions from the state for the chip industry

The good prospects are reflected in the plans of the corporations. According to IC Insights, manufacturers will spend 190 billion dollars on new plants and machines this year. That is a good third more than in 2021.

However, the companies do not have to shoulder the huge sums alone. In the US, President Biden introduced legislation that would provide $52 billion in support for the industry. The EU has provided 43 billion euros in subsidies.

Individual member states are also handing over money. Spain, for example, has announced that it will make eleven billion euros available for the chips. “Semiconductors are gaining geostrategic importance in the context of digital transformation,” said Prime Minister Pedro Sánchez. The funds come from the EU recovery fund to overcome the pandemic. Italy plans to use more than four billion euros. In Germany, the settlement of Intel in Magdeburg will probably be supported by the state with a good five billion euros.

See Also:  the collaboration we want at our feet this summer

>>Read more about this: “Largest investment in the history of Saxony-Anhalt” – Intel builds plants for 17 billion euros

European managers are calling for even more aid to catch up with Asia. Andreas Gerstenmayer, head of the Austrian chip supplier AT&S: “If Europe wants to develop technologically, then it needs more investment support for cutting-edge technologies.”

Entirely new chip locations are emerging in the huge boom. For example, Intel is investing $20 billion in the US state of Ohio. The world’s largest contract manufacturer TSMC is building overseas on a large scale for the first time. The Taiwanese are building a $12 billion factory in Arizona. TSMC is also thinking about a branch in Europe. Industry leader Samsung has also never invested so much outside of Korea. The world’s largest memory chip producer is spending 17 billion dollars on a plant in Texas.

Nevertheless, the supply bottlenecks will not go away anytime soon. The lead time for new plants is long: the planned Intel factory in Magdeburg, for example, will not be running at full capacity before 2027.