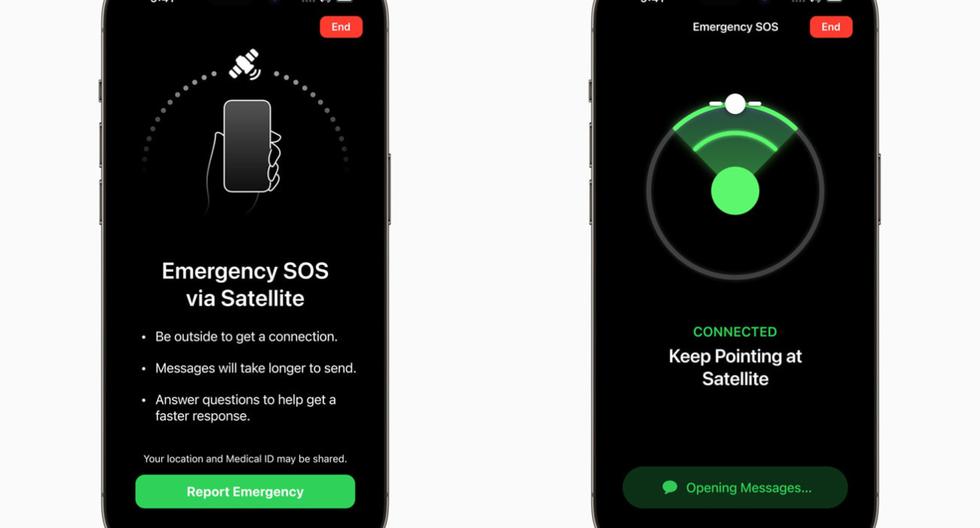 Apple already has the best possible promotion for a feature that debuted with its iPhone 14: to save someone’s life. But it is not about the car accident detection system, which also came with this model, which was already available on Pixel phones and which has already triggered some false alarms in amusement parks where the iPhone 14 confuses the acceleration of a roller coaster. and the screams of the people, with a road accident.

The tool that came into action is more special (although it is also present in Huawei smartphones), among other things because for now it is only available in North America. And it’s about the possibility of sending a text message, even if you are in a place without cell coveragethanks to a system that is directly linked to a satellite.

MIRA: iPhone 15: they filter that Apple’s next cell phone would use Sony’s “most advanced” image sensors

According to a statement from the Alaska State Troopers (something like the Alaska Highway Police) on Thursday they were notified that a person who was going with his snowmobile from the town of Noorvik to Kotzebue (distant 60 km; the first town with just over 600 inhabitants; the other, just over 3,000) had been stranded, and had activated the satellite emergency SOS on her iPhone. According to the authorities, four volunteers were able to locate this person later thanks to the GPS coordinates provided by the smartphone via the satellite connection, and they brought her safely to Noorvik. It should be remembered that Alaska is now entering its winter, and temperatures are already below freezing overnight.

MIRA: Do you want to buy an iPhone for Christmas? You may not find one in stores anymore

How does it work?

The iPhone 14 has satellite connectivity in its four models. It allows you to send and receive text messages very slowly (Apple talks about minutes if there is vegetation, such as the top of a tree, between the phone and the orbiting satellite) without the need for external antennas or changing the appearance of the device. It is clearly for emergencies: it does not allow chatting like a conventional service. And it will be paid. In the US and Canada it will be free for two years; It’s been available since November in North America, so it’s been a good debut for the service.

MIRA: The best apps of 2022, according to Apple

The iPhone 14 was presented last September, and it faces an unexpected problem: the zero Covid policy in China brought recent problems in its manufacture, especially in iPhone City, the Foxconn plant in Zhengzhou, where workers, unhappy with working conditions, they have confronted the police with sticks and tear gas; Apple has already warned that these drawbacks will affect the general availability of iPhone 14 in the world. According to Bloomberg, it could be up to 6 million fewer iPhone 14 Pro manufactured this year.