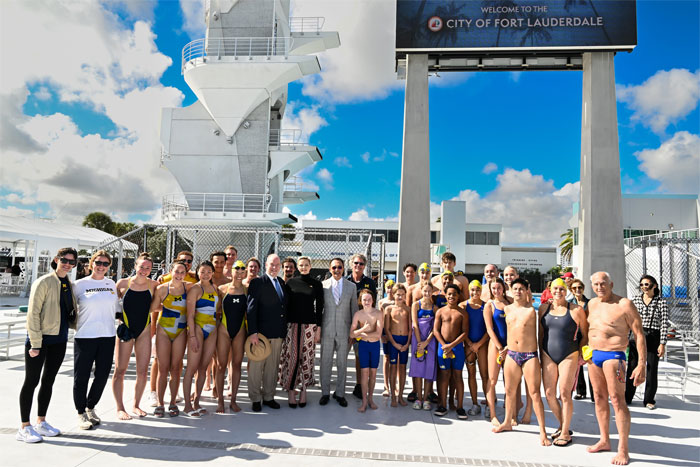 Miami – Prince Albert II and Princess Charlene of Monaco visited the facilities of the new Aquatic Center in Fort Lauderdale, Florida, which will open to the public this year and has one of the “tallest jumping towers in the world and competition pools »of the latest generation, reported this Wednesday the city council.

“The renovation of the aquatic complex establishes Fort Lauderdale as a premier destination for globally competitive swimming and diving,” said Dean Trantalis, mayor of Fort Lauderdale, located about 50 miles north of Miami, who welcomed the the possibility of twinning the small city-state of Monaco with the city of which he is councillor.

The royal couple received the keys to the city from Trantalis and expressed their wish that “these ties continue even beyond today’s celebration here.”

“We have wonderful plans to maybe have one of our main events both in Monaco and here in Fort Lauderdale, the Monaco Boat Show and the Monaco Yacht Show, to collaborate in a much more fruitful way,” Albert II said during the event that celebrates the completion of the multi-million dollar sports and leisure project.

The plans for this private visit by Albert II began with the recent trip by Trantalis and a commission to Monaco, where he met with authorities from the European country to present the Aquatic Center project, the Fort Lauderdale International Boat Show and other priorities and investments. important.

During the visit to the Aquatic Center on December 29, the royal couple “was delighted with various sporting events such as diving from the diving platform, a 27-meter-high structure and other friendly swimming competitions” made up of Olympic and Paralympic athletes. and students”.

It coincides that the princess consort of Monaco was a swimmer and member of the South African 4×100 medley relay team at the 2000 Sydney Olympics.

In 2012, she created the Princess Charlene of Monaco Foundation, which includes, among its missions, “saving children’s lives by teaching them to swim and educating them about water safety.” AG