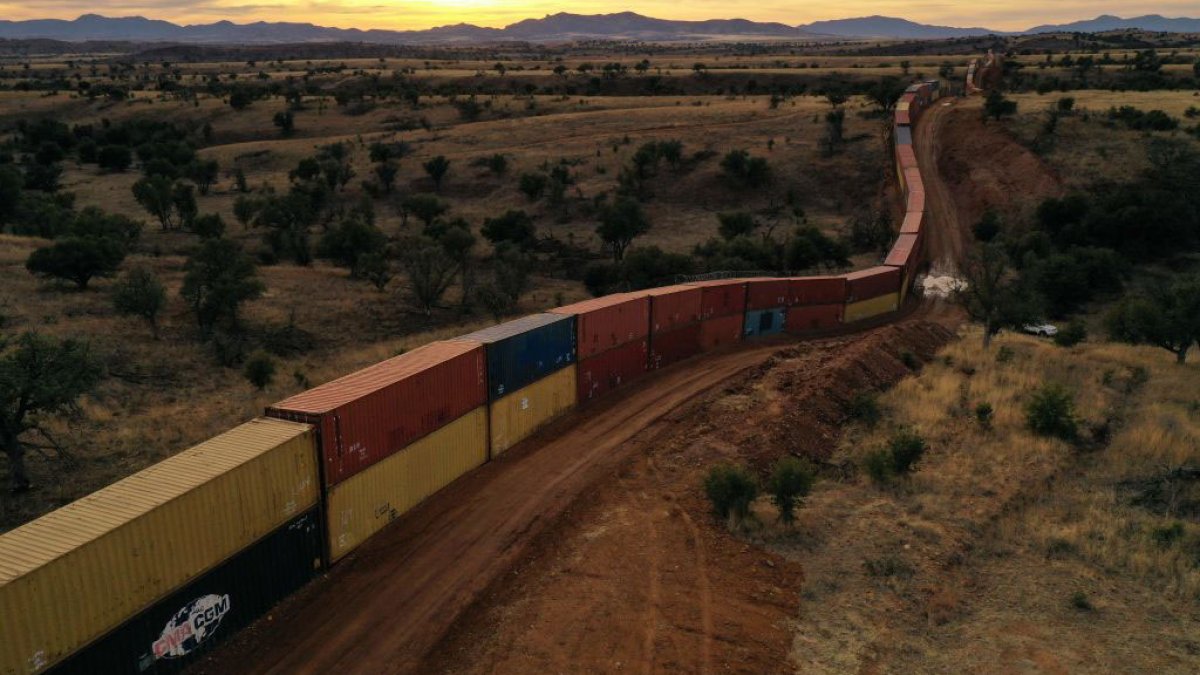 PHOENIX — Most of the containers placed by former Arizona Governor Doug Ducey on the border with Mexico have been removed, at a cost of tens of millions of dollars in the few months they were there until the new Democratic administration decided to remove them.

Removing the massive red, gold and blue steel containers is creating an extreme visual change in affected sections of the southern Arizona landscape, after new Governor Katie Hobbs takes office and another $76 million in state funding is spent to remove them, that add up to the $95 million it cost to put them up.

Ducey, a Republican, had said the containers, placed in a border gap near the western community of Yuma and along a grassy valley in eastern Arizona’s Cochise County, were a temporary measure until the president’s administration Joe Biden took over the construction of a permanent wall to secure the border.

THE WORK CARRIED A COST OF $76 MILLION

Hobbs was inaugurated this week and is one of the Democrats who called it a political stunt.

Border security was a key issue during Donald Trump’s presidency and continues to be for many Republicans. During his campaign, Hobbs’s Republican rival, Kari Lake, promised to deploy the National Guard to the border on her first day in office.

The issue went to federal court after Ducey filed a lawsuit, seeking recognition that Arizona had jurisdiction, self-governing or shared, over the stretch of federal land where the containers had been placed.

He also argued that Arizona had the right to protect its residents from illegal immigration, which he called a humanitarian crisis.

Ducey’s government and the federal agencies named in his lawsuit reached an agreement that the containers were to be removed by Wednesday, the day before Hobbs was inaugurated.

But the court later pushed back all deadlines in the case by 30 days to give Hobbs and the new attorney general, Kris Mayes, time to study the situation.

In Yuma, the 130 containers covering some 3,800 feet had already been removed by Tuesday.

Find out the details here.

Workers are still dismantling the wall in Cochise County, said Russ McSpadden, who has visited the area in the remote San Rafael Valley as a Center for Biological Diversity conservation activist for the Southwest.

About a third of some 3,000 containers were placed there, raising concerns about possible damage to local wildlife and natural water systems until protesters managed to halt work in December. Environmentalists said that the work in the Coronado National Forest put endangered or threatened species at risk, such as the western yellow-billed cuckoo and the Mexican spotted owl.

Yuma Mayor Doug Nicholls said this week that while the federal government plans to start permanent construction to close the wide gap around the section of Morelos Dam that immigrants often wade through, he is concerned about other spaces where they cannot Wall is scheduled to be built.

Border Patrol announced Friday that construction to close the breach near the Morelos Dam will begin next week, noting that the rapidly moving Colorado River in that section poses potential drowning and other injury risks to migrants. and for the agency’s own staff.

Find out the details here.

“The containers were never going to totally stop people from crossing, but it was a way to better control it,” said Republican Nicholls, who is in daily contact with the White House and federal agencies about the hundreds of people arriving in this small city. daily to apply for asylum.

Nicholls said he is already in talks with the Hobbs administration about border security, and he wants the governor to visit the area.

“I hope it comes as soon as possible,” he said. “We still feel like it’s an emergency.”

When Ducey was in power, Arizona was busing hundreds of migrants from Yuma to the nation’s capital.

Nicholls said those regular bus trips to Washington continue despite the change in governors. The Regional Center for Border Health, a non-profit organization, is in charge of the contract.

He said that without any kind of migrant shelter, Yuma is ill-equipped to help new arrivals who need housing, and that offering bus trips to Washington allows many to travel free to the east coast of the country, where they could have relatives. .

Unlike migrant buses sent to East Coast cities from Texas, nonprofit groups in Washington have acknowledged that buses from Arizona include detailed manifests for passengers and their nationalities, coordinated arrival times and medical personnel on each trip.

The Ducey government had sent more than 2,500 migrants in some 70 transfers to Washington starting in May.

The Republican governor’s administration previously estimated that each bus trip costs about $80,000 in state funds, which would put the total cost thus far well above $5.6 million.

A spokesperson for the Regional Center for Border Health in Somerton, Arizona, did not immediately respond to a request for comment on how the contract is being handled.

Nicholls stated that the Federal Emergency Management Agency will reimburse the center for the cost of travel.