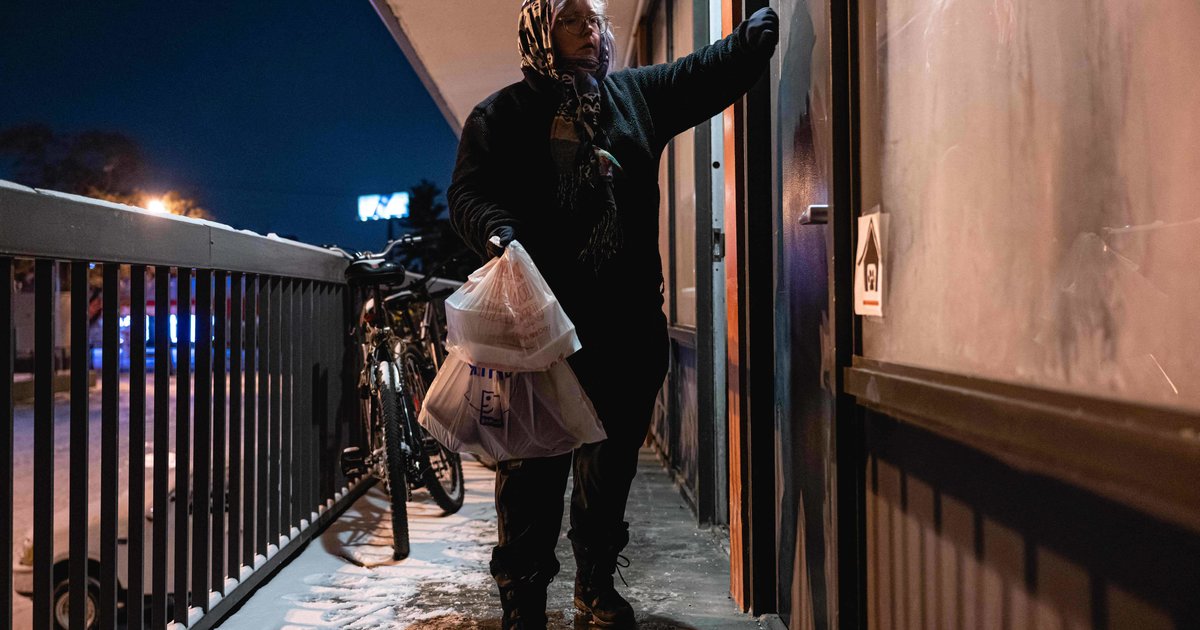 Almost 1.5 million American homes without electricity, thousands of canceled flights, closed highways and sometimes fatal accidents: the United States approaches Christmas on Saturday the day after a day disrupted by a winter storm of a rare intensity.

Our gallery: In pictures: The United States and Canada face freezing cold and a storm of rare violence

“Historic” according to the American Weather Service (NWS), it generated heavy snowfall, icy gusts, and temperatures dropping to -48°C in places, capable of transforming boiling water into droplets of ice in an instant.

Friday morning, more than 240 million people, or 70% of Americans, were affected by alerts or calls for caution. The phenomenon caused chaos in transport. A tile as millions of Americans flood the roads and airports for the holiday season.

In New York State, a travel ban has been issued in Erie County. “We stay at home (…) I can’t see on the other side of the street” because of the snow, Jennifer Orlando, affected by this ban in the city of Hamburg, told AFP. Because of the accident of a vehicle against a power line, she found herself without power for about four hours, she said.

Up to around 1.5 million homes were deprived of electricity on Friday, notably in North Carolina, Maine and Virginia, according to the specialized site Poweroutage.us. On Friday evening, they were still a million in the dark.

The storm was particularly impressive in its magnitude, stretching from the Canadian border in the north to the Mexican border in the south. In El Paso, Texas, shelters have been opened so that migrants from Mexico can protect themselves from the risk of hypothermia in the freezing temperatures. But many are too suspicious to accept this offer and many of them “simply sleep wrapped in blankets”, Rosa Falcon, a 56-year-old volunteer, told AFP.

Friday evening, the specialized site Flightaware listed 5,500 canceled flights in the United States, the most affected airports being those of Seattle, New York, Chicago or Detroit. To get to Los Angeles, Christine Lerosen could not board from Vancouver in Canada and had to persuade her brother to drive her to Seattle, to take another plane, with a stopover in Denver. “My flight from Seattle was delayed, my flight from Denver was delayed and now they’ve lost my luggage,” she sighed to ABC 7.

Our article: A polar cold is hitting North America and jeopardizing many trips for Christmas

Several states have declared states of emergency, including New York, Oklahoma, Kentucky, Georgia and North Carolina. With visibility close to zero, the blizzard and frost affecting much of the country, the roads have become very dangerous. “People should stay home, not venture out on the roads,” Kentucky Governor Andy Beshear warned CNN. “Your family wants to see you home for Christmas, but most of all they want to see you alive.” He confirmed that three people had died on Kentucky roads. In Oklahoma, at least two people died on the road, according to the agency in charge of emergency management in that state.

In Ohio, a massive collision of about 50 vehicles on a highway killed at least one person, according to local media. In Michigan, traffic on a highway was cut Friday mid-morning due to an accident involving nine tractor-trailers.

This storm of rare intensity is caused by a “low pressure bomb”: a powerful conflict between two masses of air, one very cold from the Arctic and the other tropical from the Gulf of Mexico, aggravated because the pressure atmosphere fell very quickly, in less than 24 hours. This type of storm occurs “only once in a generation”, according to the US National Weather Service in Buffalo.

In Chicago, where it was around -20°C during the day on Friday, the homeless aid organization Night Ministry was concerned about the number of beds made available by the city, which it said was insufficient. “Some of the people we’re taking in now became homeless just this year,” Major Caleb Senn, head of the Salvation Army in Chicago, told AFP. “Some are really scared. It’s the first time they’ve been at the mercy of nature with no place to go.”

Read also: After a cold snap, Christmas promises to be green in low-altitude resorts

Canada must also face this phenomenon, with extreme cold, storm and even blizzard alerts issued for a large majority of the territory. But in Toronto, the freezing temperatures didn’t put off Jennifer Campbell, who came to do some last-minute Christmas shopping in the city center.

“We have big storms regularly and we adapt,” evacuated this tourist from Ontario. “We are Canadian, it’s our way of doing things.”