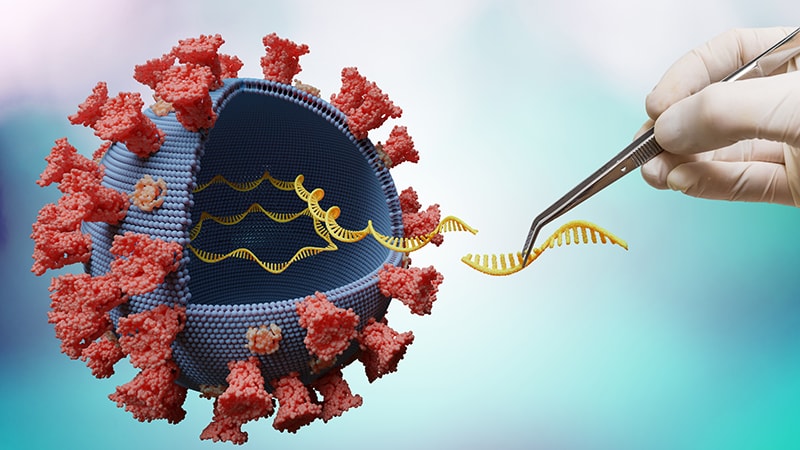 Washington, United States – Compared to any type of vaccine combined, the mRNA vaccine from Pfizer / BioNTech used in the prevention of COVID-19 is associated with a risk of anaphylactic shock ten times higher, believe two American allergists, in a letter published in the NEJM [1]. The presence of polyethylene glycol (PEG) as an excipient could be the cause of this acute allergic reaction, which however remains rare.

In this article, the Drs Mariana Castells (Women’s Hospital, Boston, USA) and Elizabeth Philipps (Vanderbilt University Medical Center, Nashville, United States) list several cases of anaphylactic shock occurring in healthcare professionals after injection of the first dose of the mRNA vaccine from Pfizer / BioNTech, then that from the American laboratory Moderna.

The first cases appeared the day after the launch of the vaccination campaign in the United Kingdom, the first country to massively use an mRNA vaccine. They concerned two women, aged 40 and 49, with a history of food or drug allergy. They carried with them a self-injectable adrenaline pen for prevention.

These two cases have led the British authorities to advise against vaccination for people with a history of acute allergic attacks. In France, the mRNA vaccine is contraindicated “in people with a history of serious manifestations of anaphylactic type allergy”, according to the High Authority for Health (HAS), which recommends paying attention to allergies in individuals before proceeding with the vaccination.

Several cases in the United States

Other anaphylactic reactions were then identified in the United States. Again, the day after the launch of the vaccination campaign, a first anaphylactic shock occurred in Alaska within ten minutes of the injection in a 32-year-old woman, who this time did not have a history of allergy. known, say the authors.

See Also:  Regina Todorenko admitted that different political views have become a problem for her family

Subsequently, “after the vaccination of nearly two million healthcare professionals, several other cases of anaphylaxis associated with the Pfizer / BioNTech mRNA vaccine have been reported in the United States”.

The second mRNA vaccine, that of the American laboratory Moderna, began to be administered shortly after that of Pfizer. “A few potential cases of anaphylaxis have been reported, including one involving a healthcare worker allergic to shellfish and carrying an auto-injectable adrenaline pen with him. “

By considering only the anaphylactic reactions occurring after injection of the Pfizer / BioNTech vaccine, the immunologists estimate the incidence at 1 case per 100,000 doses administered, i.e. a risk ten times higher compared to the incidence associated with all of the other vaccines, evaluated at one case of anaphylaxis per one million doses injected.

Regarding Moderna’s mRNA vaccine, it is still too early to know the risk of anaphylactic shock and whether it is similar to that associated with Pfizer’s vaccine, experts note.

The PEG already in question

Better known to be an excessive allergic reaction to certain foods or drugs, anaphylactic shock is also a complication that can appear after a vaccination.

According to the site “Vaccination Info service”, “it can concern all patients and all vaccines”, which implies “to monitor patients within fifteen minutes of vaccination.” While the vaccine antigen may itself be the cause of this reaction, “additives are more often the cause”.

Commonly used as an excipient in the manufacture of drugs or cosmetics, polyethylene glycol (PEG) is the number one suspect. In fact, PEG is used in the two mRNA vaccines to stabilize and prolong the half-life of lipid capsules carrying mRNA, by forming a hydrophilic layer on their surface, explain the immunologists.

See Also:  Israel is vaccinating its population at a staggering rate, but at what cost? | THE IMPARTIAL

They specify that PEG has already been implicated in anaphylactic reactions after ingestion of drugs or colonic preparation containing them, but also after injection of contrast product or hormones. “The risk of sensitization appears to be higher with injectable drugs containing PEG of higher molecular weight”.

Are other vaccines also at risk?

Both mRNA vaccines contain the same type of PEG. “The presence of PEG 2000 in mRNA vaccines raises concerns about a possible involvement of this component in the anaphylactic reaction”, say the authors. A concern that appears justified: “to date, no other vaccine containing PEG as an excipient has been widely used”.

According to them, it is also necessary to remain vigilant with other anti-Covid vaccines, such as that of Oxford / Astrazeneca with a non-replicating viral vector, which contains polysorbate 80, an excipient with “a structure close to PEG”. The other two vaccines, which should soon be validated (that of Janssen with viral vector and Novavax with viral protein) also contain polysorbate 80.

“Anyone with a history of anaphylactic reaction to any component of SARS-Cov-2 mRNA vaccines should avoid these vaccines,” according to the recommendations of the US CDC (Center for Disease Control), say the immunologists. In a preventive approach and while waiting for more data, “this recommendation could be extended to patients with a history of allergic reaction to PEG”.

According to them, these cases of anaphylaxis, even if they remain rare, underline the need for a “safety roadmap” to ensure increased surveillance, but also “to define the mechanisms involved, identify populations at risk of develop such reactions and implement strategies to facilitate the management and prevention ”of these complications.

As millions of people will soon be vaccinated and the occurrence of side effects not seen during clinical trials is almost inevitable, “we must prepare to develop strategies to maximize the effectiveness and safety” of vaccines, say the two specialists. An essential approach to “maintain public confidence” and limit hesitation in the face of vaccination.