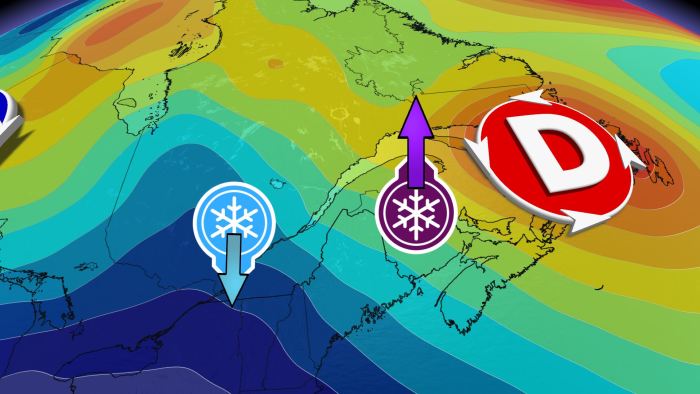 Throughout Quebec, snow accumulations on the ground are above seasonal norms. But in the east, the situation is exceptional. 27 cm on the North Shore, 21 cm in Gaspésie, 24 cm in Saguenay-Lac-Saint-Jean, 21 cm around Rimouski: on average, these regions have between one and seven cm on the ground at such a date.

The locals are getting used to it; this will be the fourth snowfall in ten days for them.

And what’s coming is going to increase the heights of the snow cover in the eastern sectors. A system is approaching and will turn into a weather bomb.

We speak of a weather bomb when there is a very sudden drop in atmospheric pressure. The magic numbers: drop of 24 millibars and more in 24 hours or less. This kind of phenomenon develops and intensifies very quickly.

And that is exactly what will happen in eastern Quebec between Sunday morning and Monday morning. It will start at the end of the morning for the Gaspésie on Sunday, to end during the day on Monday. This bomb will bring sustained snow to the Gaspé territory. Accumulations of 15 to 30 cm are possible.

The North Shore will be the next target on the list of this system. Between 10 and 20 cm of snow could be deposited there by Monday. The Lower North Shore could even be entitled to 25 cm in certain places.

Winds of up to 90 km/h will also be present, reducing visibility on the roads. Caution will therefore still be required for these regions from Sunday evening to Monday morning.

SEE ALSO: The city of Buffalo is hit by a fierce storm