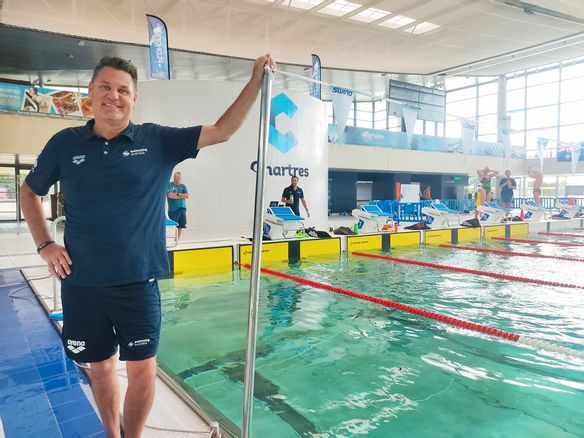 “It’s a fantastic place. The management allowed us to use the indoor and outdoor pools simultaneously as requested,” said Rohan Taylor, Head Coach of the Australian Swimming Team.

After two weeks in Chartres, the Australian selection flies tomorrow to Birmingham for the Commonwealth Games starting Thursday. “Everyone appreciated the infrastructure. It’s a great place for swimmers,” continued the coach. “It’s a lot of positives at a key moment in our season between the world championships in Budapest and the next competition in Great Britain. »

A positive assessment also for the management of the Odyssée complex. “We have organized ourselves so that their preparation goes as well as possible. We wanted things to be done right. It’s not every day that you get to host the second best nation in the world in swimming,” says Rodolphe Boussin, Operations Director of L’Odyssée. Before their arrival, a new 200m2 weight room was installed near the outdoor Olympic pool. “It is now essential for athletes to be able to carry out a dry preparation” specifies the director.

After a stint in Spain, then in Hungary and Slovakia, the team left Australia nearly two months ago. “As the days go by we are making progress towards our goals for Birmingham. The swimmers progressively set better times as the competitions approach. We do not want to announce a goal in number of medals or time. We want and know that everyone will give their best. For this, most swimmers train twice a day. From 7 a.m. to 10 a.m. in the morning and from 4 p.m. to 6 p.m. in the afternoon.

See Also:  Yaroslav Maguchy: "The sector is my front, where I have to defend my country" » Athletics

“Our main competitors for the Commonwealth Games are Great Britain, Canada and South Africa,” comments Rohan Taylor. However, his country remains the big favorite in this competition. Since the last Olympic Games, the selection has asserted itself as the main rival of the United States.
“We will come back to prepare for Paris 2024 where Frenchman Léon Marchand will be eagerly awaited. It is already very impressive. We also hope to return in 2023 despite the complication of international federation program changes and a competition in Japan. For us, it can become a privileged city ahead of events in Europe. »

To release the pressure, the swimmers and their staff were able to visit the city of Chartres on several occasions. “We were dazzled by the play of lights projected on the cathedral. Last weekend, several also went to Paris” enthuses the coach of the Dolphins (nickname of the selection). The team of 36 women and 40 men and 33 staff members were staying at the Novotel. “It was very convenient for us, comfortable and close to the pool. We had agreed with the chef on the menus in order to follow a dietary plan for our swimmers” informs the coach of the nation who obtained 20 medals, including nine gold at the last Olympic Games. Before these, he had succeeded Jacco Verhaeren, who had become director of the French swimming teams.