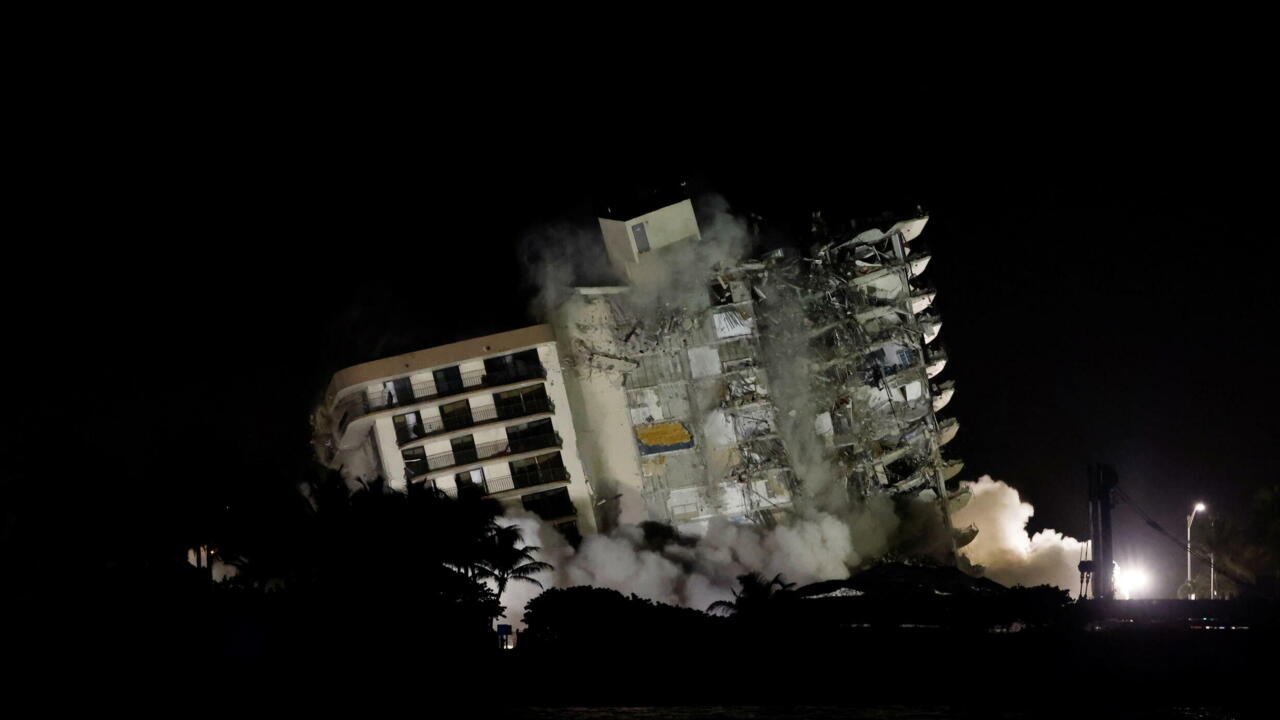 The authorities launched, overnight from Sunday to Monday, the demolition of the rest of the Florida building, part of which collapsed on June 24, leaving 24 dead and 121 missing to date. Storm Elsa, expected in the region on Tuesday, has reignited fears for the safety of rescuers.

The rest of thecollapsed building in Florida June 24, with 24 dead and 121 missing, was demolished on the night of Sunday July 4 to Monday July 5 by means of a controlled explosion.

Authorities have decided to destroy these unstable remains of the twelve-story building for fear that they will collapse uncontrollably during the passage of Tropical Storm Elsa, expected Tuesday in Florida.

The search for victims had been suspended on Saturday to prepare for the demolition. Most of the building, named Champlain Towers South, collapsed in the middle of the night on June 24 in a cloud of dust, one of the worst urban disasters in US history.

“The demolition itself is limited to the immediate perimeter of the building,” Miami-Dade County Mayor Daniella Levine warned Sunday at a press conference. “However, there is dust and other particles which are an inevitable consequence of demolitions of any type, and as a precautionary measure we invite residents of the neighborhood to stay inside,” she added.

“Destroying this building, given that a storm is coming and we were going to have to do it anyway, is prudent,” Florida Governor Ron DeSantis said on Saturday.

For the county mayor, it was “essential to bring the building down in a controlled manner to extend” the search operations, because the teams could not go further due to the risk of other collapses.

On Thursday, President Joe Biden and his wife had traveled to Florida to comfort the families, who improvised a wall of remembrance on a wire mesh, covered with photos of victims and missing, and adorned with flowers and candles.

Only one survivor – a teenager – was extracted from the rubble in the early hours of the rescue operations. No other survivor was found despite the mobilization of rescuers from all over the United States, and even from Israel and Mexico.

Among those missing are dozens of Latin Americans from Argentina, Colombia, Paraguay, Chile and Uruguay.

If the hypothesis of a breach in the maintenance of the building has been mentioned, no clear answer has been given. “We don’t have solid proof of what happened,” Joe Biden said on Thursday, referring to “a series of questions”. Among them, the president raised questions about the maintenance and structure of the building, about construction work nearby, about the rising waters. A 2018 report noted “major structural damage” as well as “cracks” in the building’s basement, according to documents released by the City of Surfside.