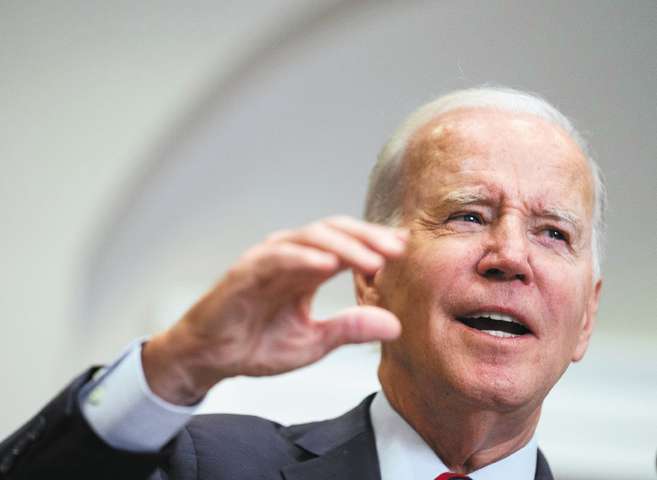 Washington (United States), 05/01/2023.- US President Joe Biden speaks in the Roosevelt Room of the White House in Washington, DC, USA, 05 January 2023. Biden will expand a humanitarian program to allow up to 30,000 additional migrants per month from Cuba, Nicaragua, Haiti and Venezuela ahead of a trip next week to Mexico that’s expected to include a stop at the border. (Estados Unidos) EFE/EPA/Sarah Silbiger / POOL

The long wait is over. After two years in power, President Joe Biden will arrive for the first time at the southern border of USA to “meet with security forces, local politicians and community leaders” to review what can be done to improve conditions in the area. On the US-Mexico border there is a crisis that cannot be hidden, and that Biden inherited from his predecessors, but this is a problem that, it should be noted, the Democrat has tried to minimize in the past.

“It happens every year,” Biden said in March 2021, when a notable increase in migrants crossing the border irregularly from Mexico.

We suggest: The day anarchy took over America

This Sunday’s trip, which will be to the city of El Paso, in Texas, was a constant demand from Republicans, more than Democrats, since Biden occupied the Oval Office in January 2021. Why is he running until now? Why didn’t he six months or a year ago? The main reason, according to White House press secretary Karine Jean-Pierre, is that the Democrat has a scheduled trip to Mexico City to meet with his Mexican counterpart, Andres Manuel Lopez Obradorbetween the 9th and 10th of January.

“We were heading to Mexico City, so it made sense to make a stop,” Jean-Pierre explained to a group of journalists.

This explanation does not sit well, since it suggests that creating a large dialogue table to build a joint response to the immigration challenge, between authorities and civil society, is still not a priority for the Biden administration. The trip to El Paso appears to be because the city was “passing through” on Biden’s route to Mexico, not because the White House finally understands the gravity of the emergency and the urgency for it to launch the complex discussion of responses to this “crisis”, a word he wants to avoid handling.

On the other hand, it can be understandable why the resistance to prioritizing the migration challenges of the border: the negotiating parties on the conservative side are not in a real disposition to conciliate and build solutions, as could be seen after the responses to Biden’s trip. . And it is that the republican voices were not satisfied with the visit, despite the fact that this was one of their demands. In fact, that’s why Biden noted that the opposition seems not to really want to work on the issue.

“Republicans have not taken this seriously at all,” the president said before his trip.

It may interest you: Donald Trump, between skepticism and fanaticism

On January 3, the Republican Party recalled that Biden still “had a trip to the border pending”, but those who demanded her appearance reproached her as soon as the visit was announced. An example is Senator Tom Cotton (R-Arkanzas) who criticized the fact that the president did not travel to the border 15 months ago.

“Joe Biden said he is too busy to visit the border, but not too busy to go on vacation in the midst of his chaotic withdrawal from Afghanistan,” the Arkansas senator tweeted.

But his response to the trip on Sunday, which he had claimed, showed disgust and nonconformity.

The former governor of South Carolina and Donald Trump’s ambassador to the United Nations, Nikki Haley, joined the criticism. “Biden’s failures can’t be fixed with a photo op at the border…she needs to do more than visit the border,” she asserted.

“(His visit) is simply insincere and too late, considering that the chaos is of his own making,” added Rep. Tom Cole (R-Oklahoma).

Voices like those of Cotton, Cole and Haley expose a major barrier to addressing America’s immigration challenges: For a section of Republicans, it’s never enough. It was wrong for Biden not to go to the border, although it’s also wrong for him to travel now. This is serious, since it is the congressmen and figures from both parties, and not Biden, who are truly responsible for building an immigration reform in the country to address the crisis.

The last major reform dates from the days of Richard Nixon in the White House. Since then, every major attempt to reform conditions for immigrants has failed on Capitol Hill. It is important to note that Barack Obama’s immigration reform, the Deferred Action for Childhood Arrivals (DACA) program, came by executive action, not by the Legislature. And given the crisis seen this week in the House of Representatives, where there was not even a consensus to elect a president, everything seems to indicate that another year will pass without Congress being able to address a bill that meets the needs of the border.

We suggest: Investigations and convictions for the assault on the United States Capitol

“I think there is not much of a chance in the legislature in the United States Congress. In the lower house there is a very weak Republican majority that is not going to be able to address this issue. The Senate does, but the lower house doesn’t, if it can’t even choose the leader of the house. It will be difficult for there to be someone with whom the administration can negotiate,” Andrew Selee, president of the Migration Policy Institute, told El Espectador.

But it is not only the statements of the Republicans, but also the actions. Seele points out that Texas Gov. Greg Abbott’s strategy of sending busloads of migrants to Democratic cities created a capacity crisis, especially since there were many migrants without family connections, who were left in overcrowded public shelters. There seems to be very little will on the conservative side for immigration reform, unless it includes ideas that have proven ineffective, such as building a wall, more security forces, or physical or institutional barriers to migrants.

There are few Republicans who have shown an intent to work on reform, such as Sen. John Cornyn (R-Texas), with whom Biden should build a bridge. The congressman was glad that the president finally made it to the border, but also said that “his visit from him cannot be just a photo session.”

“If you want to use this trip to find hard solutions to the absolute mess your policies have created, I’d be happy to point you in the right direction,” said Cornyn, who sponsored a failed bipartisan bill with Sen. Kyrsten Sinema (Ariz.-independent) to “ guarantee the humane treatment of migrants”.

It may interest you: The investigations of Congress and the role of Donald Trump in the assault on the Capitol

Biden’s visit, due to its short duration and because it seems to be happening only because it crossed the itinerary of another trip, will not solve anything. The trip that Vice President Kamala Harris took to El Paso did not mark a change either. In fact, she was criticized for choosing a location too far from the epicenter of border crossings. But she at least meets one of the old demands of Republicans who now have no excuse to work on a real plan. On the table there are two urgent demands: the end of Title 42 and the increase in resources to address migration.

The Title 42 It has proven to be an intransigent policy, used under the excuse of a health emergency to allow the immediate expulsion of people who arrive at the border, without them having the possibility of reaching a hearing to examine their asylum application.

“The legacy of Title 42 will never be the number of lives saved from covid-19 due to the policy, that is impossible to know, and there was never an adequate justification for the policy. But perhaps its most damning legacy is that it denied potentially millions of people the ability to claim asylum and their legal right to seek safety and a new life in the US,” Vox’s Ellen Loanes wrote.

The only thing that Title 42 has done is fill the void of an immigration policy, approached from the perspective of security and humanity, which today is absent from US legislation, given the inability of the two traditional parties to reach an agreement. In addition, it affects the safety of people. It should be noted that not all of these reported crossings are individual records. That is, they do not correspond to the crossing of a different person each time.

Official figures indicate that about 44% of the 2.7 million migrants with whom Border Patrol agents crossed in 2022 had a previous crossing attempt. This is because Title 42 has no legal consequences for expulsions, so a migrant can try to cross the border as many times as he wants. Therefore, this policy does not solve the problem either, but rather postpones it and condemns migrants to recreate the myth of Sisyphus, who was ordered by the gods to climb a rock to the top of a mountain to see it fall under its own weight. , over and over again, without reward or relief. But while the Biden administration has tried to repeal it on several occasions, it must also recognize that it cannot continue without this policy.

“You cannot deal with border issues without Title 42. If you can lower the numbers, now that 7 or 8 thousand people a day are arriving at the border, there is no way to even process them with the institutional capacity that exists. So, they need to get down to 3 or 4 thousand a day, so they can start the asylum system and the normal processes at the border again. That’s what they’re trying to do: get the numbers down to a manageable level, so that the institutional capacity is back up and running when Title 42 ends,” Seele explained.

The only way for the country is for Congress to address the problem, whether or not Biden visits the border. One idea is to give more resources to immigration courts, which need to be strengthened.

“They have 1.8 million backlogs, but the administration is trying to do something that a colleague of ours proposed: put asylum officers in charge of asylum decisions. That is much faster, because the courts are very slow, they have a lot of procedure and there are a lot of people involved, and there are ways to make decisions quickly and efficiently, and perhaps more evenly. They are trying to do it and they are trying to make decisions within six months, instead of three or five years, which is how long a case takes now,” Seele said.

👀🌎📄 Have you heard about the latest news in the world? We invite you to see them in El Espectador.