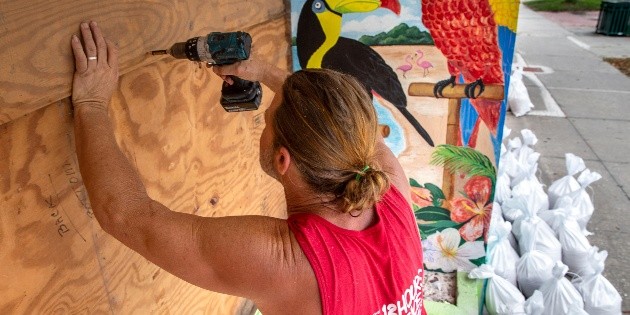 The president of the United States, Joe Biden, promised that he will give the state of Florida “all” your help to deal with hurricane “Ian”category 3 (out of 5) on the Saffir-Simpson scale, and that could make landfall in Florida Thursday morning.

Biden held a telephone call this Tuesday with the mayors of Tampa, St. Petersburg y Clearwateron the Gulf Coast of Florida, and could be the most impacted by the hurricane.

“The president has promised them all the help from the federal government”The administrator of the Federal Emergency Management Agency (FEMA), Deanne Criswell, who was in the Oval Office when the conversation took place, said at a press conference.

Biden has not yet spoken on the phone about the hurricane with Florida Governor Ron DeSantis, a Republican.who sounds like a possible candidate for the 2024 presidential elections and who has a conflictive relationship with the federal government due to his decisions on migration or rights of the LGTBI community.

Despite the disagreements between the two leaders, Criswell assured that politics will have no role in the response to the hurricane and promised that the federal government will respond to any request for help made by DeSantis.

She herself spoke with DeSantis on Friday, and a day later, the president signed an emergency declaration so that the state of Florida can access more resources.

According to the White House, The hurricane is expected to make landfall on Florida’s Gulf Coast at the earliest on Thursday morning..

“Ian”, the fourth hurricane formed in 2022 in the Atlantic basin, made landfall in western Cuba this morning with category 3 winds and has already reached the Gulf of Mexico, where its winds will intensify before heading towards the west coast of Florida as “a dangerous major hurricane”, according to the National Hurricane Center (NHC, in English) of the United States.

See Also:  Theme parks in Florida were closed due to the arrival of Hurricane Ian