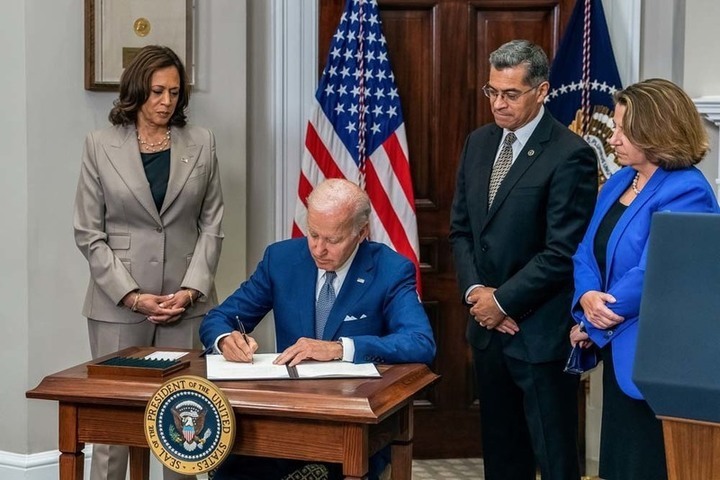 Announcing the decree, Biden once again called the Supreme Court’s decision “totally wrong.” Moreover, the President stated rather harshly: “The Court has made it clear that it will not protect the rights of women. This decision was not made on the basis of the Constitution.”

Recall that the main issue in this year’s Supreme Court case “Dobbs v. Jackson” was whether laws prohibiting abortions at terms when the fetus is viable are unconstitutional. And then how legitimate is the “Row Law”, which legalizes late-term abortions? Overturning the 1973 Roe v. Wade ruling, which established an unrestricted right to abortion, the majority concluded: “There is no reference to abortion in the Constitution, and no such right is protected by any constitutional provision.” Therefore, the Supreme Court ruled that the states have the right to independently make laws regarding abortion.

To date, abortion has been banned in at least nine states: Alabama, Arkansas, Mississippi, Missouri, Oklahoma, South Dakota, Texas, West Virginia, and Wisconsin. A dozen more states are expected to ban or restrict the procedure in the coming weeks.

“I ask the Department of Justice, as in the era of civil rights, to do everything possible to protect women who are trying to assert their rights,” Biden said.

The order commits to ensure the safety of patients and health care providers, including the establishment of mobile clinics near the borders of those states where abortion is prohibited or limited in time. In addition, the Ministry of Health is instructed to issue a report within the next 30 days outlining additional actions to protect medical abortion, expand access to emergency contraception (the pill and intrauterine device), and raise public awareness of reproductive rights. The decree also requires that patients’ privacy be protected. In addition, the White House and the Attorney General will assemble a team of lawyers to provide free services to both women and health workers. As noted in a White House fact sheet, the administration’s position is that “Americans should have the right to safely travel to another state to get the help they need,” and the attorney general will act to protect those rights if local authorities try to intervene.

To illustrate the health risks women may face, Biden cited a potential scenario: A woman has a miscarriage but will have to wait for a doctor to consult with the hospital’s lawyers about whether he can help her.

Although the presidential decree certainly contains concern about the current situation in the field of reproductive medicine, by itself it can change little in the current situation. Not to mention the fact that almost all the points indicated in it already exist in reality.

Thus, the Constitution itself guarantees the right to move from one state to another, and this does not require legal support. Democratic governors have already announced millions of dollars to serve out-of-state women, uninsured patients, and illegal aliens in reproductive clinics without waiting for executive orders from the president. Under the Affordable Care Act, women in all states and the District of Columbia have the right to preventive services, including contraceptives. Emergency contraception is also available for free or at a significant discount at health centers such as Planned Parenthood, no matter where you come from.

“There is growing concern that extremist governors and others will try to get personal data from your phone to find out what you are looking for, where you are going and what you are doing,” Biden said.

The point here is that data from mobile phone apps that women use to mark cycle dates and various medical procedures could potentially be available to state authorities. Biden directed the Federal Trade Commission to look into ways to protect consumer privacy when seeking information about reproductive health services, and the Department of Health to look into ways to help protect sensitive health information.

See Also:  Alabama pedophile cop tried to cover up his dismissal from the FBI

But at the same time, the Ministry of Health has already issued guidance in which it warned of the dangers of using such trackers and reminded that “doctors and other health care providers, as well as insurance companies, know that, with some exceptions, they are not required to – and in many cases do not have rights to disclose patients’ personal information, including to law enforcement.” The confidentiality of health information is already – without a presidential executive order – protected by the Health Insurance Portability and Accountability Act (HIPAA) of 1996.

And the federal government has no power to overturn state abortion laws. So from a practical point of view, we repeat, this decree will change little.

Therefore, in this case, abortion is just a pretext for an important political statement on the eve of the elections. Introducing the order, Biden stressed that the fastest way to overturn the Supreme Court’s decision would be for Congress to pass a federal law legalizing access to abortion. Now the Democrats do not have enough votes for this. Accordingly, the president urged the public: “If you want to change the position of women – and even little girls – in this country, please go and vote. The only way to fulfill and restore this right of women in this country is to vote… For God’s sake, there is an election in November. Vote. This is a choice to restore the rights that have been taken from us and a moment to protect our nation from an extremist agenda that goes against everything we believe as Americans.”

A June Associated Press/NORC poll found that 87% of Americans support abortion when a woman’s life is in danger; 84% – if the abortion is done after rape or the woman became pregnant as a result of incest; 74% support abortion if the fetus is found to have a life-threatening disease.

In addition, Americans are divided in their opinions regarding the limits on the terms for which an abortion is performed. 61% of those surveyed believe that abortions should be legal in the first trimester; Only 34% approve of such an operation in the second trimester, and 19% in the third trimester. A Wall Street Journal poll confirmed that 48% of Americans approve of a ban on abortion after 15 weeks of pregnancy. Support for restrictions was highly dependent on the political party to which the respondents belonged: among those who spoke in favor of the introduction of the time frame were 75% of Republicans and 21% of Democrats.