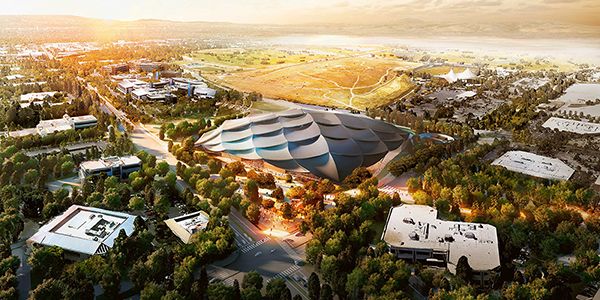 Located in the city of Mountain View, California, the campus it contains two office buildings along with an events center and 240 short-term employee housing units.

Each structure is covered by a tent-like roof made up of a system of inward-curving panels that have been outfitted with a combined 50,000 silver solar panels that can generate nearly 7 megawatts of power.

The upper levels of the two campus office buildings were designed with a flexible floor below the tent-like canopy supported by slim white columns.

In this regard, Google mentioned: “The design of the second floor has variations in the floor plates to give teams a designated ‘neighborhood’ area that is highly flexible to change according to their needs.”

The roof will provide 40% of the energy for the offices.

For his part, Thomas Heatherwick, founder of Heatherwick Studio, explained: “The idea of ​​the ‘office’ has been stuck for a long time. Yes, people have done different aesthetic treatments. Our focus has been on people’s emotions.”

As a result of the Bay View solar panel skinning and nearby wind farms, Google explained that the building will run on carbon-free power 90% of the time, with a view to operating 100% this way by 2030.