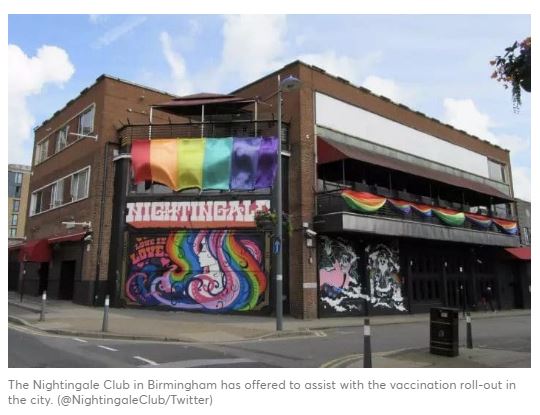 In the United Kingdom, the historic LGBT + local of the city of Birmingham, the Nightingale Club has offered its spacious three-storey headquarters as a post for the administration of Covid19 vaccines to support the vaccination campaign that has started in the country for about a month.

The proposal was launched through a tweet from the club’s official account: “Following the incredible decision made by @BrewDogJames, we too would like to offer the @NightimgaleClub headquarters to provide free vaccines. We are one of the largest locations in Birmingham with ample space for NHS (British National Health Service) staff across three floors. Let us lend a hand ”.

Following the amazing lead taken by @BrewDogJames we too would like to offer the @Nightingaleclub venue to assist with vaccination rollout for free.

We are one of the biggest venues in #Birmingham with ample room for #NHS staff over three floors.

The offer found considerable success among tweet users who helped spread it on their accounts. And given the pandemic situation in the UK it could be of help in the fight against Covid19.

In the meantime, British Prime Minister Boris Johnson has announced to the population the third national lockdown, after the dramatic data of the contagion that at this moment see the United Kingdom as one of the nations most affected by the pandemic in the world.