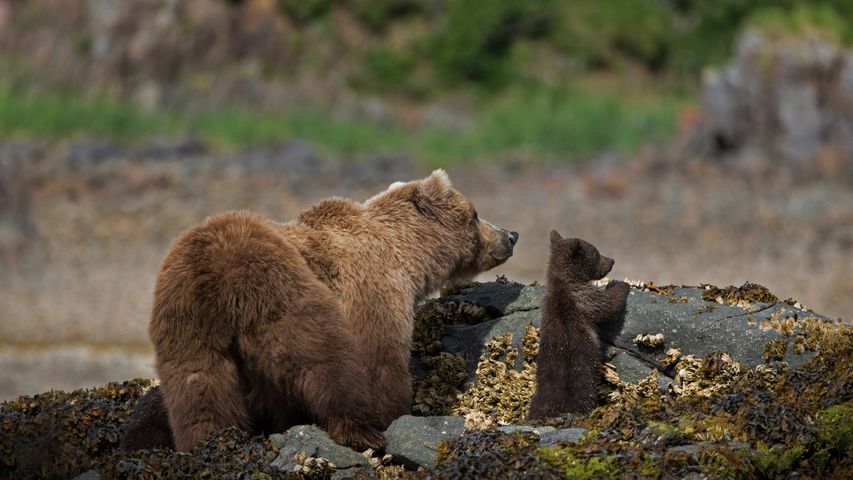 Summer in the north belongs to the bears. When the sun rules, so do Alaskan brown bears—like this mother bear with her cub in Katmai National Park, about 250 miles southwest of Anchorage. Brown bears, also known as grizzly bears in Alaska, spend the summer months doing all sorts of things: foraging, feasting, frolicking, fighting, and mating under skies with almost uninterrupted daylight.

Alaska’s brown bears are the largest bears in the world, in no small part due to the summertime abundance of food they find in their homeland. Alaska comes alive in the summer, and the bears take full advantage of what’s on offer. They eat up to 45 kilograms of food per day and thus gain up to three kilograms of fat every day. They need these reserves to survive hibernation, which can last up to eight months. In addition, grizzlies are not picky when it comes to food. They eat berries, flowers, roots, fish, small mammals like beavers, and large animals like caribou. Thanks to this diet, they can reach a weight of up to 500 kilograms. The largest of them live on Kodiak Island, where a subspecies of about 3,500 bears has lived in isolation for about 12,000 years. Kodiak bears can weigh up to 780 kilograms and are three times the size of some of their North American and Eurasian relatives, measuring up to 2.8 meters in length.

Centuries ago, brown bears were widespread across much of Europe, North Africa, California and even Mexico. Although their numbers and ranges have shrunk significantly, there are still about 200,000 brown bears worldwide, most of them in Russia, Canada and the United States. This makes them the most widespread bear species in the world. Some of the happiest of these are Alaska’s coastal bears. Katmai National Park is a green wonderland of mountain ranges, valleys, lakes and rivers. There are no roads leading to the region, which keeps pesky people at bay. (Visitors must use boats or seaplanes.) In short, this mother and her baby live in bear paradise.

See Also:  In the south, whites are fighting for a new racial segregation