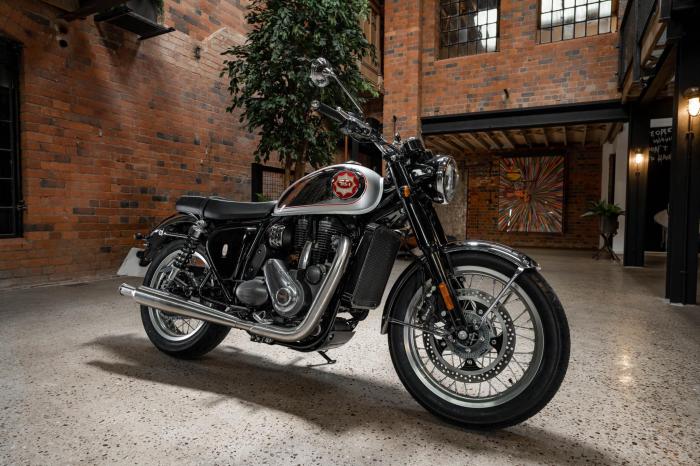 After the war the BSA (Birmingham Small Arms Company) was the largest motorcycle manufacturer in the world. The British brand became world famous with its Gold Star single cylinder, built during the 1950s and 1960s, before going into decline in the early 1970s. The rights of the British brand BSA were then acquired, in 2016, by the Indian group Mahindra, through its subsidiary Yezdi, which invested in view of a return to the market in 2021. Now, here we are. BSA is back at the Birmingham Motor Show, with the new Gold Star 2022.

As mentioned, BSA was once famous for its powerful single cylinder. And this is exactly the type of engine that drives the new Gold Star 2022. The new model, in fact, is powered by a single-cylinder engine of 650 cc, with double overhead camshaft distribution, 4 valves and liquid cooling. The gearbox is 5-speed. The engine is capable of delivering a maximum power of 45 CV a 6.000 giri/min., with a peak torque of 55 Nm at 4,000 rpm. Thanks to these numbers, the Gold Star 650 fits perfectly among the rideable motorcycles with an A2 license and its performance is not far from that of its main competitor: the Royal Enfield Continental GT 650 (47.6 HP at 7,100 rpm. And 52 Nm at 4,000 rpm).