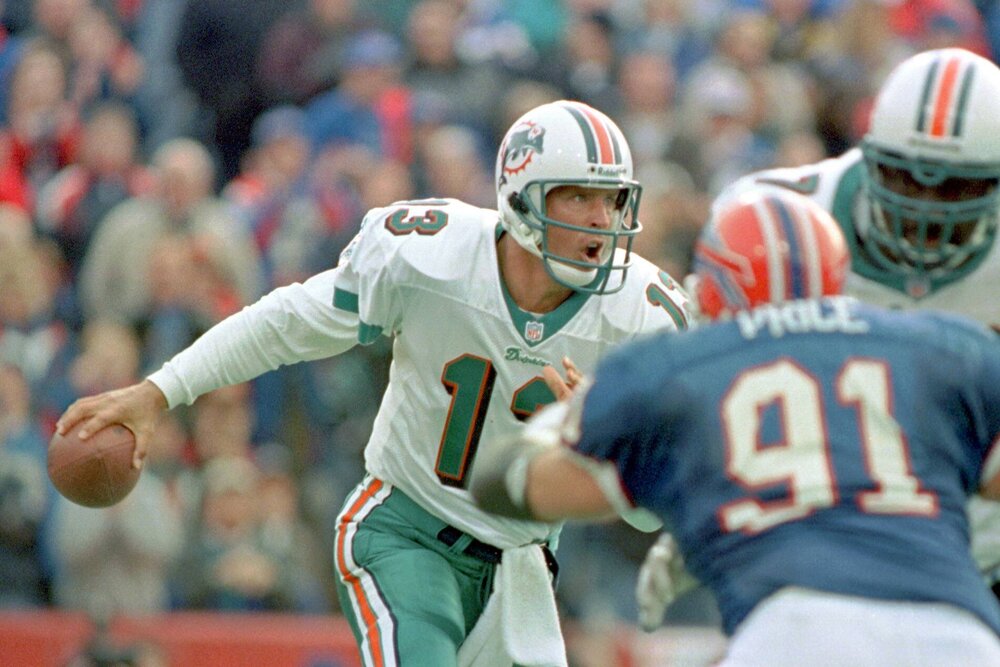 Buffalo vs. Miami: 30 years ago, this game promised the highest quality every year. Today the big names are Pat Mahomes, Josh Allen, Joe Burrow and Justin Jefferson. As the GOAT Tom Brady begins to head down the homestretch with Aaron Rodgers, the league belongs to the young quarterbacks and wide receivers. In the early ’90s, NFL stars were Joe Montana, Jerry Rice, Jim Kelly, and Dan Marino. Kelly and Marino in particular determined the big duel in the AFC East for years, which the Buffalo Bills in particular like to remember.

Dan Marino and Jim Kelly were both first-round draft picks in 1983. The big difference, though, was that Marino went to the NFL with the Miami Dolphins, while Kelly was picked by the Houston Gamblers from the then-rival USFL. After two years, Kelly also went to the NFL in Buffalo and from then on should have a lasting influence on the league together with his rival from Miami.

The big blemish that Dan blames on Marino is that despite his outstanding playmaking skills, he never won a Super Bowl. Only once did he make it into the final, where he lost to the San Francisco 49ers with Joe Montana.

In the years that followed, Marino had good chances of winning the title, but later Jim Kelly and his Bills often stood in his way. In January 1992, 1994 and 1996, the two Hall-of-Fame quarterbacks regularly faced off in the AFC playoffs.

On January 12th, 1991, Jim Kelly and the Buffalo Bills faced Dan Marino and the Miami Dolphins in the 1990 AFC Divisional Round at Rich Stadium.

The Bills defeated the Dolphins 44-34.

Kelly won all three encounters, with the highlight being the 1994 AFC Championship Game, with Buffalo. Always by a margin of at least ten points, Marino and Miami suffered a crushing 29-10 loss in the conference finals back then. The Dolphins were not up to the then very modern and fast no-huddle offense of the Bills. But Marino also played his part in a negative sense. The Dolphins quarterback legend undertook three turnovers and the stamp that he couldn’t win big games was etched into Marino’s biography for good.

However, anyone who thinks the Bills have the happier ending on their side should hold back. Jim Kelly pulled it off and lost four straight Super Bowls in the early ’90s. Two of them against Troy Aikmann and the Dallas Cowboys. A historic brand to this day.

Is the rivalry revived?

After Kelly and Marino retired, not much happened in either Buffalo or Miami. The Bills waited until 2020 for their next playoff win. In Florida, they have to go back 40 years to celebrate a playoff win without Marino involved.

Josh Allen is a new quarterback savior for Buffalo. Whether Miami found this one in Tua Tagovailoa is still disputed. A win against the AFC East rival could swing the debate in favor of the young Hawaiian.

However, it is questionablewhether Tua will even be allowed to make the playoffs after suffering three concussions this season and gets clearance from the doctors. Researchers are even investigating whether Tagovailoa should ever play football again.

If he fails, it’s up to backup Teddy Bridgewater to win the wild card game. He broke his little finger two weeks ago and is also a questionable one, leaving the remaining hope on Skylar Thompson’s shoulders. Thompson is a rookie and was only selected in the 7th round, which says a lot about how little faith Miami has in him.

The revival of a rivalry under such adverse conditions is doubtful. Especially since Josh Allen and Buffalo also present a tough hurdle with a healthy Tua Tagovailoa. All that remains for the “Dolphans” is to travel back in time and indulge in fond memories of last summer, when the season started promisingly with victories over the Baltimore Ravens and Buffalo before fate took its course.

Meanwhile, the Bills are looking for modern-day rivals for lack of alternatives. Many NFL fans are already looking forward to a possible duel with Pat Mahomes and the Kansas City Chiefs. However, they have to be careful in Buffalo themselves that they don’t suffer from a negative series a la Dan Marino.

Because with all the tributes to Josh Allen and the current team. At the moment they don’t have any big successes on the credit side. If it’s going to be enough for the first Super Bowl title in Buffalo’s history, the Dolphins mustn’t stumble them.