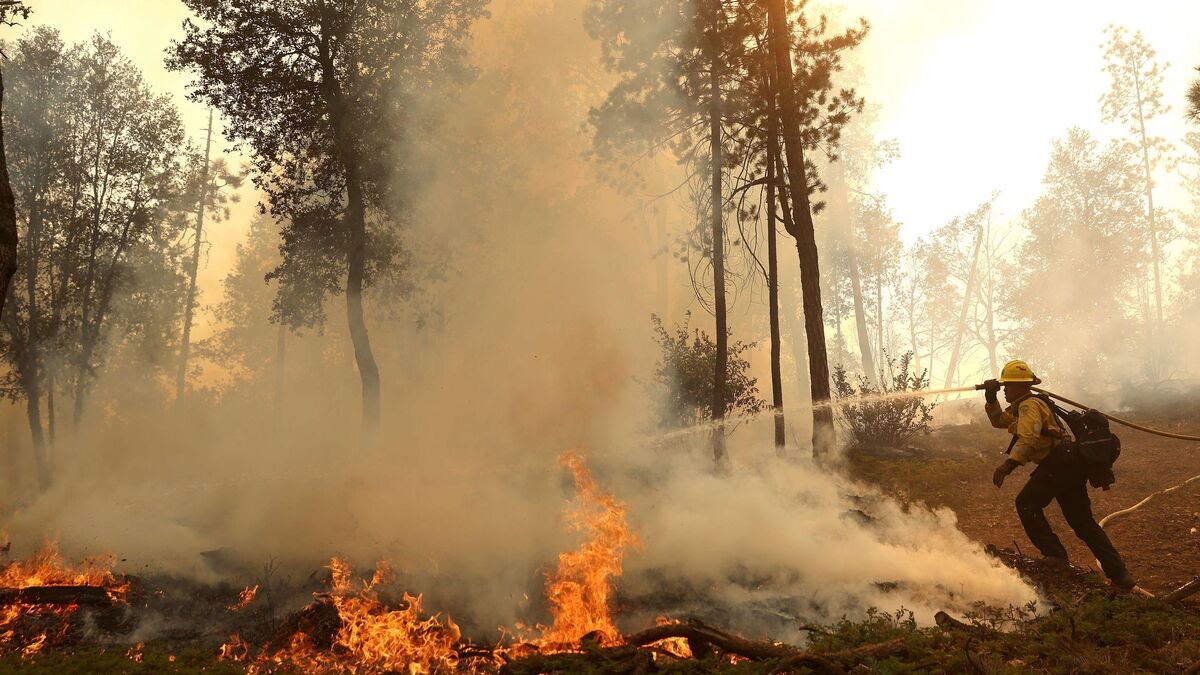 France, Spain, Portugal… but also the United States. A Violent fire that has ravaged the Californian forest since Friday continues to spread, causing the evacuation of thousands of people, in a context of strong heat peaks affecting tens of millions of Americans across the country. The fire, dubbed “Oak Fire,” is spreading across Mariposa County, near Yosemite National Park and its famous giant sequoias.

It “has expanded significantly in the northern portion, moving further into the Sierra National Forest,” according to a Sunday bulletin from the California Department of Forestry and Fire Protection (CAL FIRE). Favored by “extreme drought”, winds and rising temperatures, the fire, fought by some 2,000 firefighters supported by 17 helicopters, burned at least 6,313 ha of forest, destroyed 10 properties, damaged five others and threatens several thousand. The fire is by no means contained and the heat, combined with low humidity, will “hinder” efforts to fight it, CAL FIRE said.

More than 6,000 people, mostly living in small high-altitude communities, had to evacuate on Saturday, according to a spokesman for the California fire department, quoted by the Los Angeles Times newspaper. “It was scary when we left, because we were getting ashes on us and we had such a vision of this cloud (of smoke). It looked like it was over our house and coming towards us very quickly,” Lynda Reynolds-Brown, a woman who had to leave her home, told local TV station KCRA 3.

“We were starting to gather our things. I went back up the hill to look and I thought Oh my God, it (the fire) was coming fast,” added her husband, Aubrey Brown, near a school in Mariposa that had been turned into an emergency reception center. Yosemite Park, one of the most famous in the world, had experienced a fire in mid-July, the flames of which threatened its giant sequoias.

The American West has already experienced in recent years wildfires of exceptional scale and intensity, with a very marked lengthening of the fire season, a phenomenon that scientists attribute to climate change. “Oak Fire” is one of the most dramatic manifestations of the heat wave that hit the United States this weekend, in the Northwest, the center and the Northeast. According to a map from the National Weather Service (NWS), a very large part of the country, including California, all of the south, and then much of the east coast, experienced temperatures of 37°C to 43°C.

This scorching heat should ease somewhat on Monday: it will “continue to rage across the central and northeast this (Sunday) evening, before the upper trough over Canada descends into the region to moderate a little temperatures tomorrow” (Monday), according to the NWS forecast.

But not all regions will benefit: Temperatures of 37°C or more are forecast for the next few days in parts of eastern Kansas and Oklahoma, south to Missouri and north to Arkansas. Even the usually cool Pacific Northwest won’t escape the heat, with high temperatures “expected to rise steadily over the next few days and could set record highs,” the NWS adds.

” The scientists predicted these extraordinary and catastrophic events for decades now,” reaffirmed former US Vice President Al Gore, who received a Nobel Peace Prize in 2007 for his commitment to the climate, on Sunday on ABC News. “Today they say that if we don’t stop using our atmosphere as a garbage can and if we don’t stop these heat-trapping (greenhouse gas) emissions, things are going to get worse. More people will be killed and the survival of our civilization is at stake,” he added.