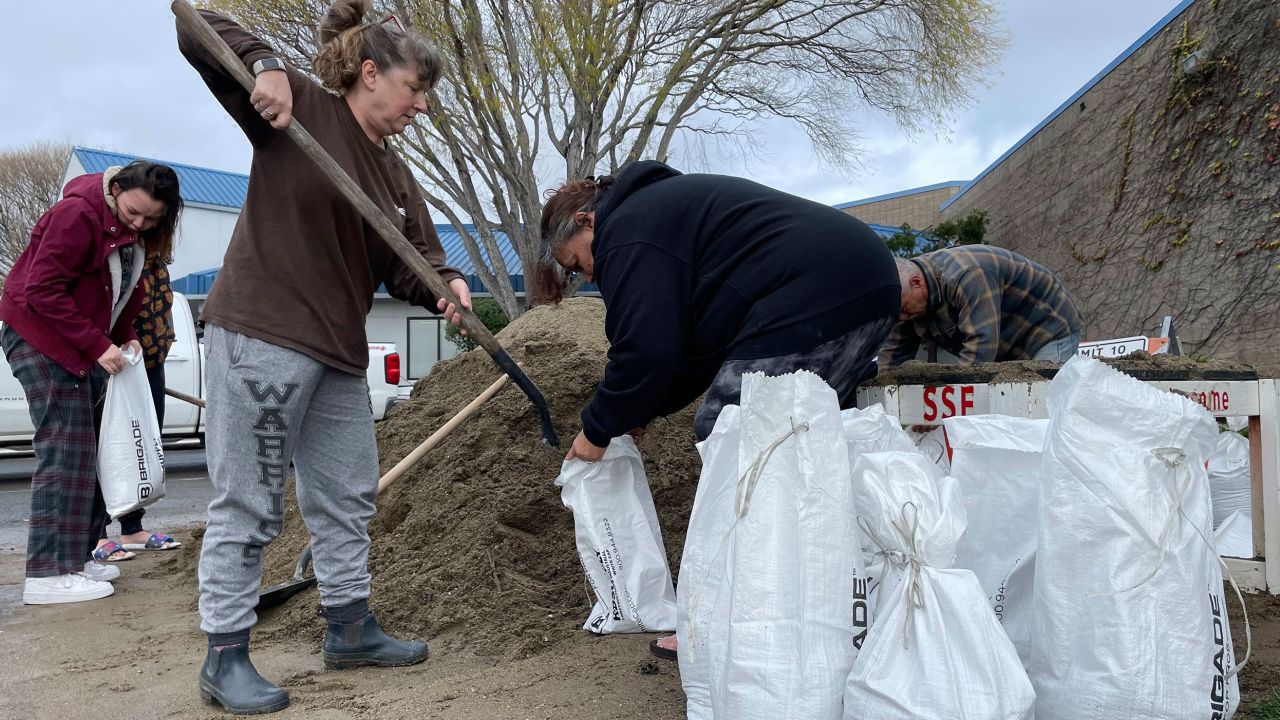 Authorities in California prepare for a cyclone bomb 6:18

(CNN) — Wind gusts in central California are already reaching hurricane force, while heavy rain and strong winds begin to move ashore in the Bay Area, all as part of a powerful storm, known as a cyclonic bomb, which hits the coast of the state.

The maximum wind gusts along the central California coast have so far been 136 km/h in Nicasio Hills and 123 km/h in Los Gatos. The stronger winds and heavier rain from this storm will continue to move toward the coast tonight.

The National Weather Service is expecting a multi-hour period of moderate to heavy rain and high winds on Wednesday night. Rainfall of more than 2.5 cm per hour is possible, leading to the possibility of flooding, mudslides and power outages.

As forecasters warned hours before, the system could cause “immediate disruption to trade and, worst of all, the probable loss of life.” This phenomenon occurs after a series of record rains that hit the same area over the weekend.

Meanwhile, a major winter storm that brought snow and freezing rain to its colder northern tip, and severe thunderstorms and tornadoes to its warmer southern tip, continues to threaten more severe weather as it moves east.

More than 120,000 customers without power as the bomb cyclone batters the California coast

More than 120,000 California homes and businesses were without power Thursday night as the bomb cyclone pounded the state’s coast.

Several people fill sandbags in South San Francisco, California, on Tuesday. Residents of Northern California are bracing for another round of powerful and potentially dangerous storms this week. Credit: Haven Daley/AP

California’s latest dangerous storm is the result of a strong “atmospheric river,” a long, narrow region in the atmosphere that can carry moisture thousands of miles. Northern California and the Bay Area will suffer the worst effects this Wednesday and Thursday, when heavy rains and gusty winds move toward the coast.

The storm intensified into a bomb cyclone on Wednesday after rapidly strengthening while still offshore. A bomb cyclone is an area of ​​low pressure that intensifies 24 millibars in 24 hours. Millibars are a unit used to measure atmospheric pressure.

In addition to very heavy rains, gusts of wind of between 100 and 130 km/h are possible.

“If these winds materialize, the threat of widespread power outages and property damage will be greatly increased,” the San Francisco weather service office warned.

“A number of hazards are anticipated, with torrential rain and high winds expected to be the most widespread impact. Widespread rainfall of 76-150mm is anticipated, with locally higher amounts in coastal areas and Northern California.” the weather service said.

While expected rainfall amounts would normally have no major impacts, the state recently recorded heavy rainfall that left the ground saturated and susceptible to flooding and mudslides, the weather service said.

Northern California, in particular, was inundated by heavy snowfall and deadly flooding over the weekend, prompting evacuation orders and water rescues. This raised questions about the degree to which rainfall could make a dent in California’s current dry conditions.

The first snow studio Season reports in the Sierra Nevada mountains released Tuesday show that the current snow cover is well above average for this time of year, according to a statement from the California Department of Water Resources.

According to the department, the Sierra snowpack provides 30% of California’s water needs.

The depth of snow measured this Tuesday at Phillips Station, south of Lake Tahoe, was 14 meters. Statewide, snow cover is at 174% of average for this date, according to the agency.

However, experts warn that despite the deluge and rain forecast for next week, the drought is not over yet.

“The significant snowpack in the Sierra is good news, but unfortunately these same storms are causing flooding in parts of California,” DWR Director Karla Nemeth said in a news release.

“This is a good example of the threat of extreme flooding during a prolonged drought as California experiences more swings between wet and dry periods brought on by our changing climate.”

And the stormy weather isn’t going to let up anytime soon. More rain is expected through the weekend, although the exact effects are not yet clear.

The message to get across is to be resilient as this is not a “one off” storm, the San Francisco weather service said.

Meanwhile, more than 30 million people are under some type of severe weather threat in the South, with the risk of severe storms stretching from northwestern Florida to far southeastern Alabama and parts of Georgia and throughout the east coast to southeastern Virginia.

As showers and storms move deeper into Georgia and northern Florida, damaging wind gusts, large hail and tornadoes are possible.

The multi-hazard storm, which headed toward the central and southern US after battering California with deadly flooding, has already sparked at least 130 storm reports in the past two days and left a trail of destruction as it moved across the country, moving south and southeast.

There have been more than a dozen tornadoes, nearly 100 reports of damaging winds, and 27 hailstones. This Tuesday there were six tornadoes in Illinois and on Monday an EF-1 in Jessieville, Arkansas. An EF-1 tornado has winds of 138 to 180 km/h.

Other tornadoes have been reported in Louisiana, Oklahoma, Tennessee, Georgia and Mississippi.

Tara Williams stands with her grandson Major Williams on Wednesday after a large tree fell on a home in Montgomery, Alabama, during a heavy overnight storm. Credit: Mickey Welsh/Advertiser/USA Today Network

Police in Montgomery, Alabama, were dispatched overnight to “multiple locations” around the city in response to “reports of damage due to (a) possible tornado,” the city said Wednesday. Montgomery Mayor Steven L. Reed stated that more than 50 homes and businesses had been damaged by severe weather overnight.

There were no fatalities, but one adult with minor injuries was reported, the mayor said.

“It could have been a lot worse,” Reed said. “We have to make sure that we take these things seriously and that we understand that in this time and in this area, we will see more of these events.”

Several homes and businesses in Montgomery, Alabama, were damaged by a potential tornado early Wednesday morning, according to CNN affiliate WSFA. Credit: WSFA

A possible tornado touched down in Burke County in eastern Georgia on Wednesday, downing trees and causing damage to some homes and power lines, the Burke County Sheriff’s Department said. Another possible tornado hit just south of Atlanta, in the same neighborhood that was hit by a powerful tornado in 2021.

The storm also brought heavy rain, with much of the south facing 48 hour totals of precipitation between 50 and 100mm. Some areas across the Mississippi and Ohio River valley recorded up to 152mm, and isolated areas through eastern Arkansas received up to 254mm.

An extremely warm and humid air mass over the east and southeast coast helped fuel the outbreak of severe weather. On Tuesday, more than 35 daily records for maximum temperatures were broken in the eastern US: the thermometer marked 27.2 °C in Baton Rouge, 25 °C in Wilmington and 20.5 °C in the city of Washington.

Meanwhile, more than 5 million people are under a winter weather alert in the Midwest and Great Lakes, where snow and ice accumulation is expected to affect travel, according to the weather service.

Heavy snow is expected in parts of the Upper Midwest through Wednesday, while freezing rain and a mix of wintry conditions will spread into northern New England on Thursday, the weather service says.

The storm is expected to begin to gradually dissipate on Thursday.

— Taylor Romine contributed to this reporting.