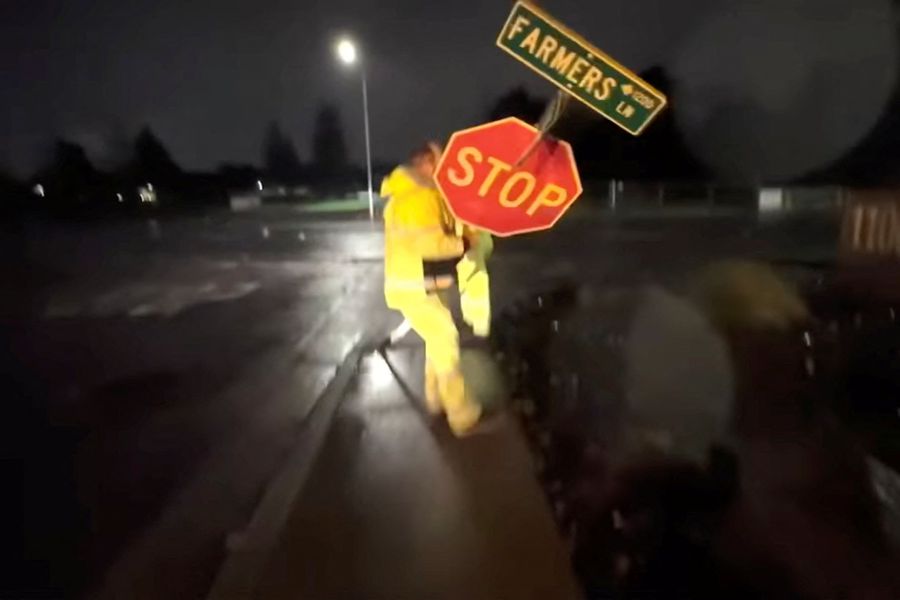 Strong winds and heavy rain from a powerful “atmospheric river” battered California Thursday, knocking out power to tens of thousands of people, triggering flash flooding and contributing to the deaths of at least two people, including a child after a tree fell. about his house.

Authorities ordered evacuations in a high-risk coastal area where mudslides killed 23 in 2018 as a huge storm loomed over the state on Wednesday. They warned residents to stay indoors amid the threat of flooded roads, downed trees and other hazards.

It was the last of several atmospheric rivers – long columns of moisture that stretch out over the Pacific – to batter California. This was a “Pineapple Express” that originated near Hawaii and was carried toward the west coast of the country by a rotating area of ​​rapidly falling air pressure known as a “bomb cyclone.”

In Sonoma County, Occidental Town Volunteer Fire Department Chief Ronald Lunardi said a child believed to be less than two years old died Wednesday night when a tree fell on a house, The Press reported. Democrat. In Fairfield, a 19-year-old girl died after her vehicle was washed out on a flooded highway before hitting a utility pole, police posted on Facebook.

The storm dumped rain on parts of the San Francisco Bay area, in a region where flood warnings have been issued. In southern California, the weather phenomenon was expected to peak early Thursday morning with Santa Barbara and Ventura counties bearing the brunt, according to forecasters.

“We anticipate this could be one of the most challenging and impactful series of storms to make landfall in California in the last five years,” said Nancy Ward, director of the California Governor’s Office of Emergency Services.

San Francisco Mayor London Breed explained at a press conference that the city was “preparing for a war.” Crews cleared clogged storm drains, tried to move the homeless to shelters and handed out emergency supplies and ponchos to those who refused to leave.

The city distributed so many sandbags to residents that supplies temporarily ran out.

Strong winds, gusting to 136 km/h or more, forced the cancellation of more than 70 flights at San Francisco International Airport and downed trees and power lines. Firefighters rescued a family after a tree fell on their car and reported the fall of “large pieces of glass” from the Fox Plaza tower, near the Civic Center, although no injuries were reported. It is “highly possible” that the damage to the skyscraper was wind related, the department tweeted.