Whileindiana jones 5 is still being made, Chris Pratt confirms whether or not he will participate in the reboot of Disney studios.

In the mid-2010s, actor Chris Pratt found himself a comfortable place in Hollywood starring in two of the most bankable sagas of the moment: in the Marvel Cinematic Universe in his Star-Lord costume and in the trilogy Jurassic World with his role as Owen Grady. In addition to one or two detours on the side of a few other blockbusters, the actor has mainly devoted himself to these two box office monsters in recent years. But does Chris Pratt really have a future after Marvel and Jurassic World ?

Time will tell, but between his Amazon series The Terminal List and soon the movie Super Mario Bros, we can not say that the actor does not try. Rumors have been swirling for years about a possible Disney reboot of the iconic saga Indiana Jones, but where Chris Pratt would take over the role of the famous archaeologist from Harrison Ford. Enough to add a new successful saga to his recent career, however, the actor has once again denied these rumors of corridorsthis time at the microphone of the podcast Happy Sad Confused :

“I don’t even know who Steven Spielberg is. Who? Steven who? No. Aren’t they doing another Indiana Jones with Harrison Ford? All I know is I read a quote by Harrison Ford and I don’t know if it was really him, but it scared me enough already. It said something like, “When I die, Indiana Jones will die. And I wondered if I was going to be haunted by the ghost of Harrison Ford if he ever died and I played the character…”

Chris Pratt therefore quips by referring to a 2019 Harrison Ford interview with the media Today. The actor said there that no one but him could play Indiana Jones: “Don’t you understand? I’m Indiana Jones. When I leave, he’ll leave with me. It’s simple.” With any luck, the comedian’s ghost will scare Chris Pratt for long enough to prevent the return of the eternal pseudo cool archetype that he releases to us quite regularlyweakly inherited from the magnetism of Harrison Ford in the Star Wars et Indiana Jones. 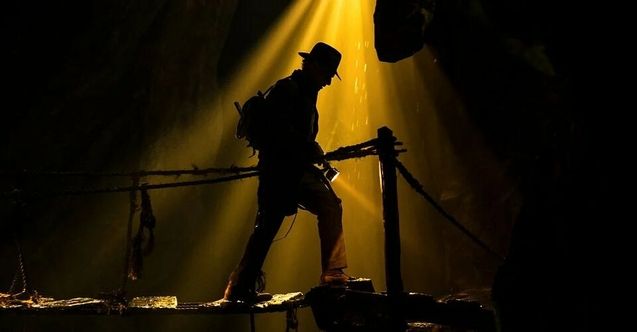 As a reminder, Harrison Ford is indeed expected one last time in the role of Indiana Jones in a fifth installment directed by James Mangold (Walk the Line, Logan). We can also see Phoebe Waller-Bridge, Mads Mikkelsen, Toby Jones and Antonio Banderas there. On the screenplay side, a hell of a collection of creators have passed the baton, but the survivors are Jez Butterworth and John-Henry Butterworth, who have already worked together on Le Mans 66 et Flag Day.

The photograph was taken by Phedon Papamichael (Downsizing, The Sept of Chicago) and music by the legendary John Williams. indiana jones 5 should land in our French cinemas on June 28, 2023. As for Chris Pratt, the guy is currently squatting on the big screen with Jurassic World: The World After et Thor : Love and Thunder.