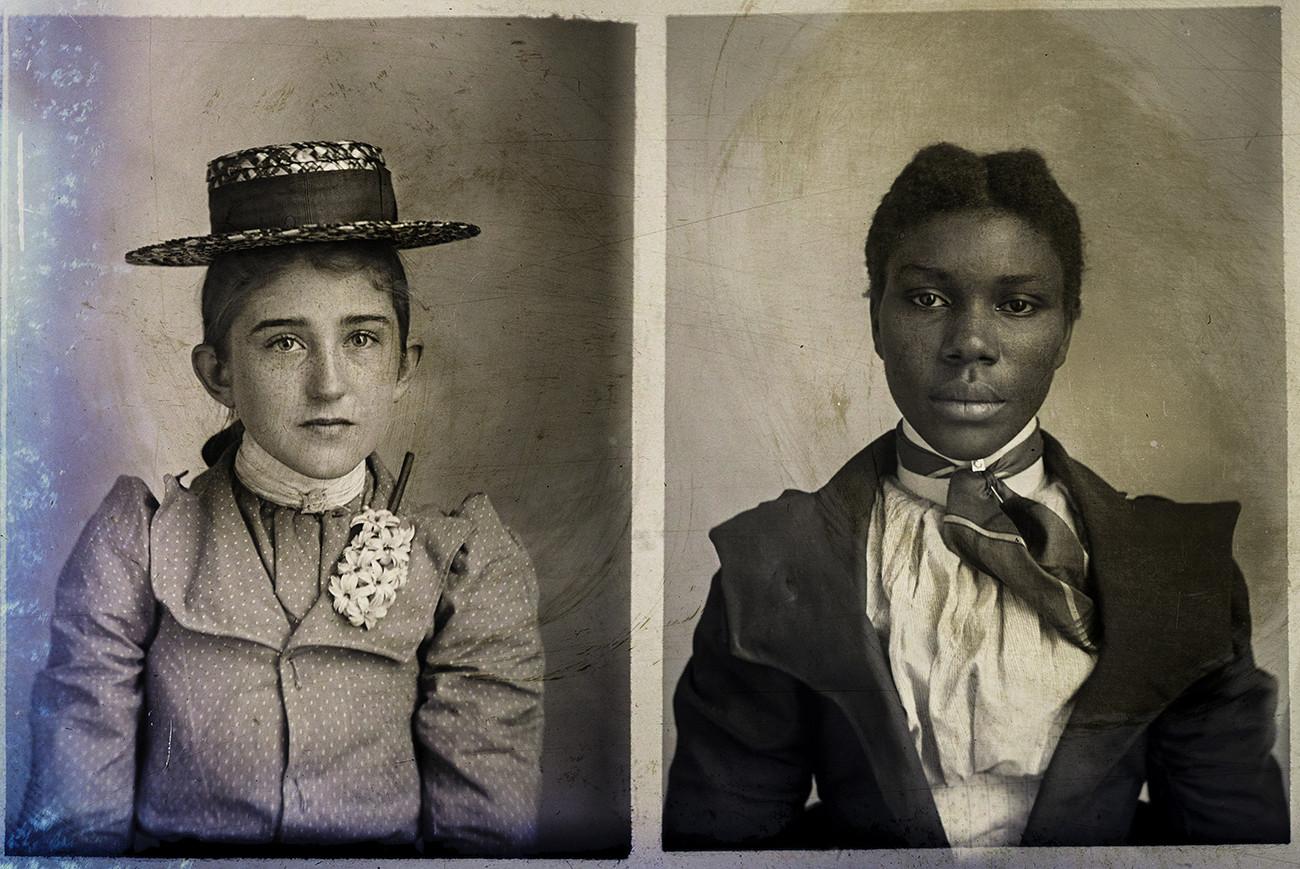 Hugh Mangum (1897-1922) was an American traveling photographer who worked in southern states during the rise of Jim Crow-era laws imposing racial segregation and discrimination. Its clientele was both racially and economically diverse.

Through Mangum’s lens, we witness a diverse population whose unique personalities and essences Mangum has captured, redefining our sense of history, place and time. After his untimely death at the age of forty-four from the flu, the glass negatives of his Penny Picture Camera lay abandoned and unprotected in a family tobacco barn, largely forgotten for fifty years. In the 1970s, a developer came close to bulldozing the barn, and it was only through the concerted efforts of local conservators that they were saved and then donated to Duke University.

A limited edition of photographs by Hugh Mangum is now available, selected and printed for this exhibition by Alex Harrisphotographer, writer and founder of the Center for Documentary Studies at Duke, and Margaret Sartor photographer, writer and teacher at the Centre. This exclusive edition shows the genius of Mangum, the alchemy of time and the elements, and the unique vision brought to this project by Sartor and Harris.

The exhibition, which first opened at the Nasher Museum in North Carolina, followed by exhibitions at ACA Galleries in New York and the Deland Museum, Florida, is now available. It is accompanied by the first edition of the book, Where We Find Ourselves, written and edited by Sartor and Harris, who are interviewed here.

Ventes de livres : Where We Find Ourselves, 2019,
https://www.amazon.com/Where-Find-Ourselves-Photographs-Documentary/dp/1469648318

For an email request: [email protected]

Lanza: Tell us about Hugh Mangum and how did you come to the project?

Harris and Sartor: A traveling portrait painter during the rise of Jim Crow segregation, self-taught photographer Hugh Mangum welcomed people from all walks of life into his temporary studios. After his death in 1922, hundreds of his black-and-white glass plate negatives, with more than 12,000 images, remained stored, and largely ignored, in a tobacco drying barn on the family farm in Durham, Carolina. North. Destined for demolition, the barn was saved at the last moment, and with it this unequaled document of life during turbulent times in the American South. We first encountered his work when it was shown at Duke University in the late 1980s, but it wasn’t until the 2000s, using digital technology, that we began to grasp the true scope and originality of Mangum’s artistic work.

As photographers and photographic scholars, we have long been fascinated by how the photographic portrait, from its inception, has served as an indicator of personal identity, social status, fashion, cultural traditions, relationships and history. The wide variety of portraits made by Hugh Mangum reveal a time and place that we as Americans think we know and about which we have many assumptions – ideas that we carry with us about race, class and family relations, ideas based on facts but also, to a certain extent, on fiction. What these images convey is both profound and surprising.

What is perhaps most surprising in Hugh Mangum’s work is his artistic freshness. The portraits gathered on his multiple-image glass plates were never intended to be seen in groups but seen in the 21st century, they allow us to bear witness to what the photographer experienced on a daily basis. Mangum’s portraits reveal his studio’s open policy and the racial and economic diversity of his clients. Some of Mangum’s models are marked by notable influence, others by rarity, but all are imbued with a strong sense of individuality and often joy, suggesting that the models have built their own visual narratives in collaboration with Hugh Mango.

As publishers, we were attracted not only by the originality of the portraits, but also by the way these portraits had been altered and had survived, both literally and figuratively, over the passage of time. Indeed, these dazzling images — made even more dazzling by the work of time — are a celebration of life.

Lanza: What is the meaning and significance of the title of the post: Where We Find Ourselves?

Harris and Sartor : Where We Find Ourselves was a title we chose early in our process because it is both a compelling metaphor, a question and a statement of fact. Looking at the striking photographs of Hugh Mangum created during a tumultuous time in the American South, we found ourselves confronting and rethinking much of what we had learned about the past and the passed down assumptions we still carry. with us. Mangum’s instinctive ability to connect with his sitters is palpable even now and the portraits he has made act as a kind of portal between past and present. They allude to unexpected relationships and stories, create a new way of connecting the known and imagined past of the racial divide. Seen, understood and experienced now, in the present, they prove how fantastic, imaginary – and delusional the world created by white supremacist racism is. These photographs contain an implicit message that we need to redefine the way we look at ourselves today.

When organizing the exhibition, we experimented with scale: considerably enlarging a selection of portraits, sometimes to life size, to not only give the impression of looking directly at the men, women and children who were seated in front of Mangum’s camera, but also of those people watching us. And we believe our choices regarding damage, color, and scale are entirely consistent with the paradox of timelessness and topicality that makes Mangum’s art both enduring and relevant.

Lanza: What was your curatorial and editorial vision, your interpretation and your process for the exhibition and the book?

Harris and Sartor: Our approach to these century-old glass plate negatives was very personal. Two key decisions helped define how and which images we selected. The first was that we recognized that high-resolution scans allowed us to scrutinize and enlarge individual portraits from multi-image glass plate negatives. This meant looking at some 10,000 or more individual exposures, which was time consuming but hugely exciting and allowed us to choose the specific portraits that resonated with us the most. The other choice was to embrace not only Hugh Mangum’s artistic gifts, but also the fact that the glass plate negatives had survived a history of their own. We were surprised and moved by the poetic power of the damage done to Mangum’s negatives over time and decided to reveal this damage when printing his negatives. The photographs in this exhibition and this book are testament to something amazing – the unpredictable chemistry that often characterizes the best art and its ability over time to evolve with and absorb life and meaning beyond intentions. or expectations of the artist.

Where We Find Ourselves is as much about the nature of art as it is about the life and vision of Hugh Mangum. His portraits were not widely known during his lifetime; only now, nearly a century after his death, are they receiving serious attention. The same goes for other photographers, some of the greatest practitioners of the medium, like EJ Bellocq with his New Orleans Storyville portraits; Richard Samuel Roberts and his beautifully crafted portraits of African Americans in South Carolina; the extremely realistic portraits of Mike Disfarmer of Heber Springs, Arkansas; and the vast body of work by Vivian Maier made on the streets of Chicago and New York.

Lanza: Discuss the conservation methodology of these historical works and your choices for the publication of the book?

Harris and Sartor: The prints in this exhibition were made from digital scans of black and white gelatin dry glass negatives exhibited and processed by photographer Hugh Mangum at the turn of the 20th century. When Mangum died in 1922, the glass plates remained in the family barn for five decades, subject to the vagaries of time, weather and contempt. In the 1970s they surfaced and were donated to Duke University in 1986. The Mangum glass plates were then cleaned and stabilized by professional, highly skilled restorers. In the 2000s, they were photographed in high resolution color with a digital camera.

Hugh Mangum’s dry glass plate negatives have their own history etched into their emulsion, a latent image fully visible now due to our decision to reproduce his work in color rather than grayscale. A century later, enriched with meaning and made more beautiful by the effects of passing time, they resurface in a world that has also changed. The original black-and-white glass plate negatives, now seen with their damage and degradation fully visible, reveal surprisingly vibrant portraits; the cracks, fingerprints and delicate color shifts that surround and sometimes cover the models’ faces give them new meaning.