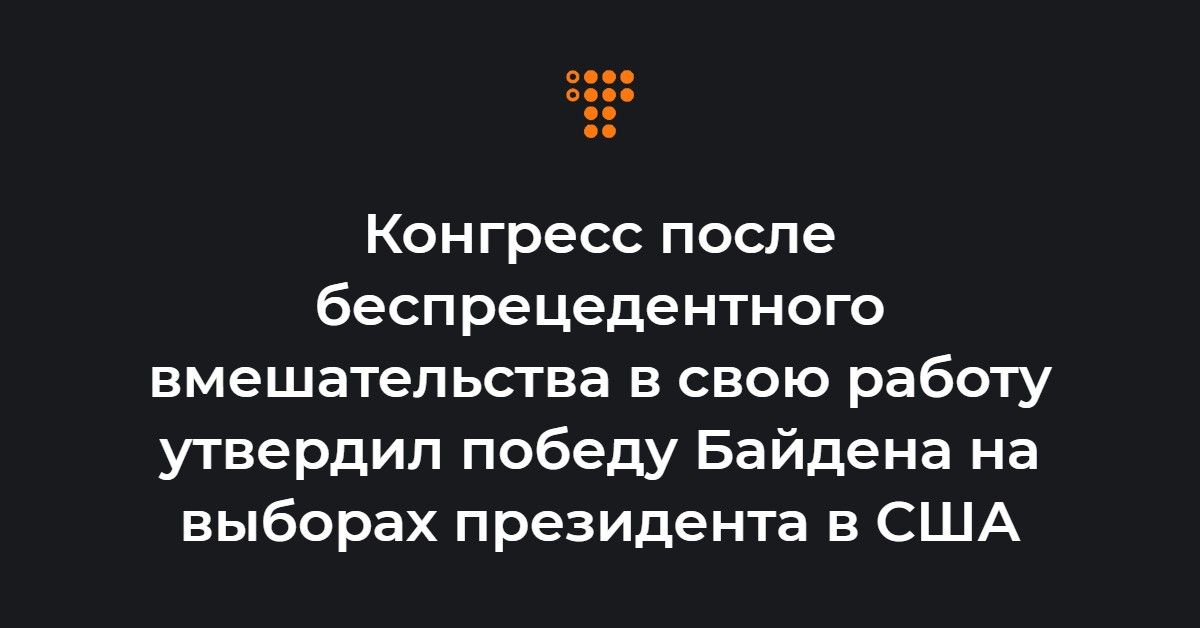 The American Parliament – Congress – on the night of January 7, officially approved the results of the presidential elections in the United States, according to which Democrat Joe Biden and Vice President Kamala Harris, elected by him, won.

Usually, the formal procedure was interrupted by the invasion of several thousand supporters of the incumbent President Donald Trump into the Capitol building, where American parliamentarians sit. This happened for the first time for more than 200 years.

Now Biden only has to take the oath of office on January 20, after which he officially acquires the powers of the President of the United States. Trump, who in the past few months has tried to appeal the election results due to dozens of claims, from that day on, he will definitely not occupy the highest post. At the same time, Trump’s accounts have been blocked on Twitter, Instagram and Facebook due to incitement to violence, and his closest associates seem to turn away from him.

What happened during the Congress meeting?

According to the procedure, during the meeting of Congress, where the election results are approved, they can be appealed if requested by representatives of both chambers elected from the same state. That this would happen was not a surprise.

After the approval of the electoral votes from the states of Alaska and Alabama (all 12 of them went to Trump), such an appeal was announced by the Republican congressmen from Arizona (there 15 electors went to Biden). Both chambers, in accordance with the procedure, went to the meeting.

It was at this time that thousands of Trump supporters who gathered under the Capitol passed through the police cordon and entered the building. Senators were evacuated, members of the House of Representatives barricaded themselves in the boardroom.

One of Trump’s supporters during the storming of the Capitol. Washington, January 6, 2021

In the end, after a while law enforcement officers pushed the protesters out of the building and the square in front of the Capitol. It is known about at least 13 arrested during the riots. A total of four people have died, including one woman from a gunshot wound, according to the Washington police. There are other victims, including those from the Capitol guard.

A curfew was imposed in Washington (30 people were detained for violating it, transfers NBC News), and units of the National Guard from the states of Virginia, New Jersey and New York, as well as special forces from the Department of Defense, were sent to the city to maintain law and order. Also in Washington until Biden’s inauguration on January 20, the state of emergency will last.

read more in our material

Donald Trump vs. (almost) everyone

American media and commentators almost unambiguously linked the events at the Capitol to the rally that Donald Trump convened in his support in Washington DC a few hours before the Congress meeting. He is there almost directly called of people “Go to the Capitol”.

In recent days, the incumbent president managed to get into a scandal: The Washington Post published an audio in which a voice similar to Trump seemed to threaten a Georgia official and demanded that he find the votes that Trump lacked to defeat a competitor.

See Also:  Montgomery in the #Corona Spezial: "Vaccine deficiency is the core problem"

And on the day of the meeting of the Congress, the current president called on Vice President Mike Pence influence the outcome of the meeting and “Reject votes”. But the one issued a separate statement, where he emphasized that he does not consider himself endowed with such powers.

After the clashes began in the Capitol, Trump posted a one-minute video message, where he stated several times that the elections “Rigged” and “Stolen” but nevertheless asked the protesters to disperse, calling them “Very special people.” In another post, Trump wrote that “The holy and convincing victory in the elections is so unceremoniously and despicably selected into the majestic patriots, who for a long time have been extremely badly and dishonestly treated.”

Both of these tweets are now unavailable. Twitter hid them – and announced that it had blocked Trump’s account for 12 hours for violating social media rules. And in case of further violations, it can block the profile forever. For 24 hours, Trump’s accounts were blocked by Facebook and Instagram. This happened for the first time in four years of the Republican presidency.

And even that is not all. CNN reportedthat after the events in the Capitol several White House officials are planning to resign. And some members of the government allegedly discuss the ability to remove Trump from office and appoint Pence in his place in accordance with 25th amendment to the US Constitution. And we did not mention this statement Democrats congressmen to impeach Trump (again!)