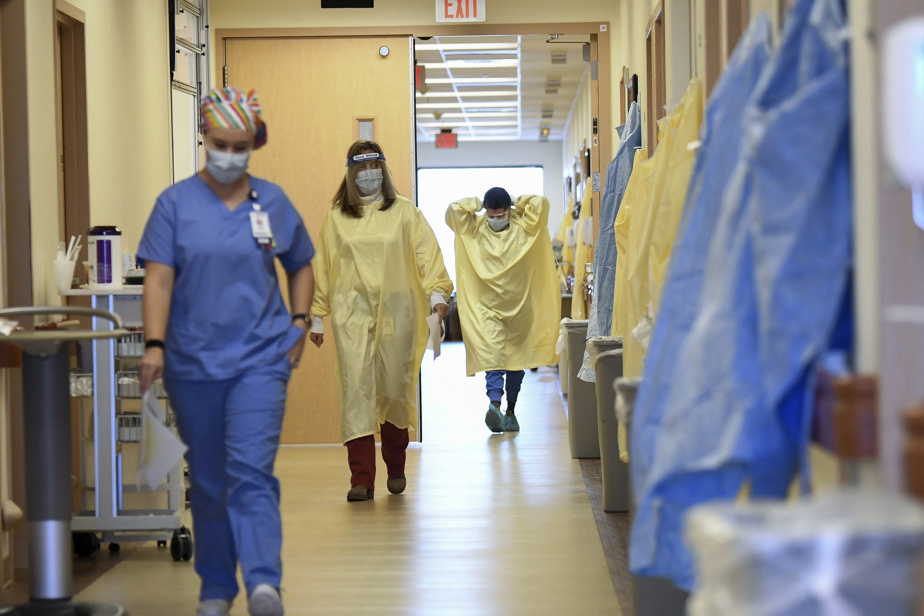 As tensions over political transition at the head of the country monopolize attention, the COVID-19 pandemic is growing in intensity in the country

While the number of hospitalizations has skyrocketed for weeks, a new record of contaminations was recorded on Friday, with nearly 290,000 new cases in 24 hours. Thursday, a record of deaths was reported to the country, with more than 4,000 in 24 hours, unheard of in a single day.

“There are now more than 132,000 people hospitalized due to COVID-19, more than the total recorded by adding the peaks observed during the waves of spring and summer,” COVID Tracking officials said Thursday Project, which is alarmed by the deterioration of the situation in several states in the south and west of the country. As of Friday, the number had seen a rare small decrease, to 131,000 hospitalizations.

Arizona currently has the highest hospitalization rate in the country, according to organization data, with nearly 10,000 new infections per day in a population of 7.8 million, comparable to that of Quebec.

“I’m completely panicking. There is no other way to describe how I feel, ”says Arizona Public Health Association Director Will Humble.

Hospitals, he notes, are saturated and operate in crisis mode while the effect of the holiday break, punctuated by many meetings likely to promote infections, is just beginning to be felt.

Some establishments do not accept people they would normally accept and send patients home after shortening their treatment. In 10 days, I don’t know where the new patients are going to go.

The Dr Will Humble, Director of the Arizona Public Health Association

The public health specialist is angry with the state governor, Doug Ducey, a Republican close to outgoing President Donald Trump, who refuses to tighten the health restrictions in place.

His administration, notes Mr. Humble, believes in particular that the closure of businesses is unlikely to help curb the health crisis at this stage and may prove to be even more damaging to the population by worsening the economic situation.

The state, he says, has a budget of several hundred million dollars obtained from Washington to compensate companies hit by any restrictions, but instead relies on vaccination to turn the tide.

“Arizona is in the process of putting the vaccine in enough arms to allow us to find the normality that our lives have been missing for months,” said the director of the Department of Health, the D a few days ago.re Cara Christ.

The Dr Joshua LaBaer, ​​attached to Arizona State University, notes that the vaccination process will take months to take effect on the crisis.

The state, he says, began to see a spike in cases in November after successfully stemming a strong wave over the summer with containment measures the governor does not want to reuse, including closing bars and restaurants. restaurants.

“The numbers will continue to rise throughout January before possibly peaking in February. The outlook is not very encouraging ”, underlines Dr LaBaer.

California, Georgia and Alabama are not left out

In particular, Los Angeles County earlier this week asked paramedics to conserve oxygen and not transport cardiac arrest patients who have a very low chance of survival to hospital to limit engorgement. The establishments.

According to the COVID Tracking Project, more than 40 hospitals in Georgia can no longer accept new patients in intensive care or emergency rooms due to lack of space.

Alabama is also facing a sharp increase in infection cases and a high hospitalization rate that mirrors that seen in Arizona.

The Dr Don Williamson, who heads the state hospitals association, expressed alarm earlier this week in an interview with a Birmingham radio station that the holidays were just starting to take hold as the bed occupancy rate is close to 100%.

The population, he says, has too often refused to comply with basic measures, such as wearing a mask, echoing the reservations expressed by Donald Trump throughout the pandemic.

“For reasons that I may never understand, we have been unlucky to experience a pandemic in an environment where science has been politicized while politics and science rarely mix,” said Williamson.