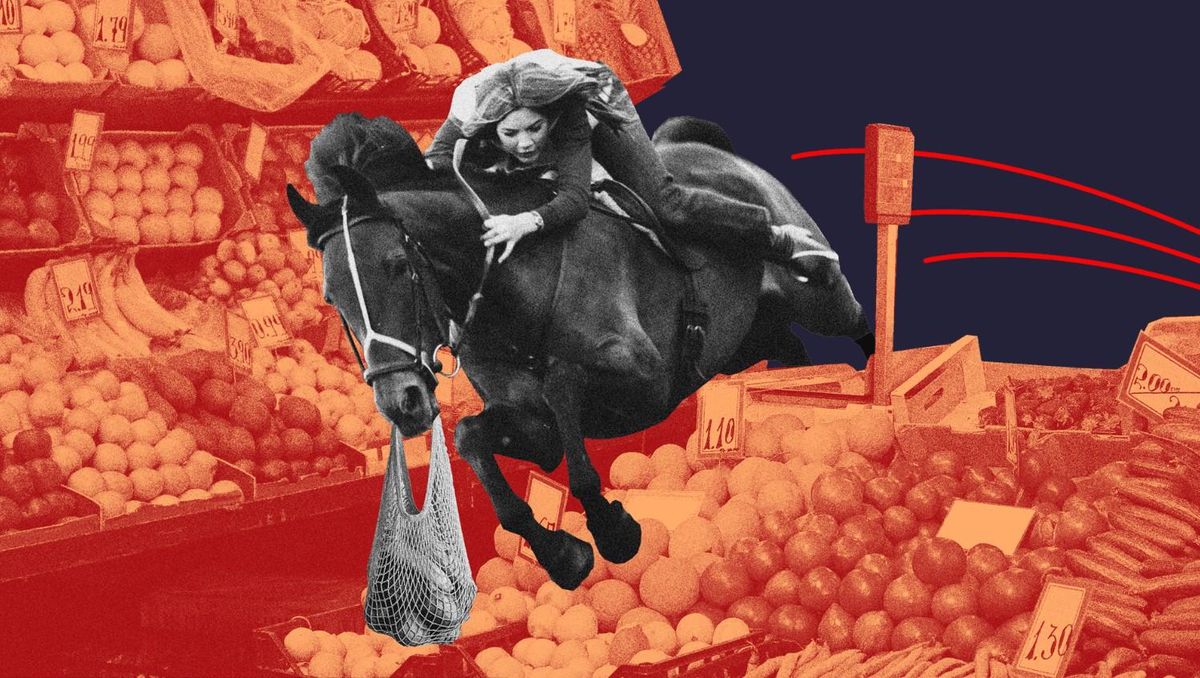 – A pony comes into the supermarket

There was a lot of bad news in 2022. But there have also been funny, quirky, unbelievable things that deserve more attention. The slightly different annual review.

WIf he reviews the year 2022, he will think of Messi’s World Cup goals, of Putin’s war and of British personnel changes. But what about the lioness in the canton of Vaud? Or the girl who stormed the supermarket with the pony? Among all the funny, bizarre and unbelievable reports that agencies send to the country’s editors every day, there are always a few that didn’t get the attention they deserved.

An Indian couple has sued their son and his wife for not having grandchildren after six years of marriage. Sanjeev and Sadhana Prasad are suing their son in a court in Haridwar, northern India, for damages of 50 million rupees (about 570,000 francs) if his wife does not give birth within a year. According to their own statements, the parents spent all their savings on their son’s pilot training and his lavish wedding and honeymoon. “We didn’t see any other option,” the plaintiff told the BBC. “We tried to talk, but when we bring up the subject of grandchildren, they always avoid it. Your decision not to procreate would mean the end of our family name.”

During a live report on Chilean television, a parrot proved just how dangerous the La Reina neighborhood in Santiago de Chile has become. The reporter Nicolás Krumm reported for the channel CHV from a park about the security problems in the neighborhood when the parrot flew onto his shoulder and plucked a headset from his ear. Later, the reporter published the sequence of the theft online. However, the petty criminal soon dropped the loot.

A man drove down the Spanish Steps in Rome in a Maserati and is said to have damaged three steps. With the help of passers-by, the 37-year-old came down the stairs and drove away. He was later caught at Milan airport while trying to return the car to a car rental company, police said. The newspapers quoted him as saying that he had ranked incorrectly and was ready to take responsibility Corriere della Sera and The Republic.

In an aquarium in Japan, penguins are revolting against the consequences of rising food prices. Because the cost of aji mackerel has risen, Hakone-en Aquarium operators are offering the animals cheaper saba. But some penguins refuse. “But we don’t force them to eat the cheaper fish. Anyone who refuses it will continue to get Aji as before, »explained a spokesman for the aquarium.

The trail of slime from a 20 centimeter giant snail led customs at Düsseldorf Airport to another 92 conspecifics. The customs officers initially thought the enormously large snail was a toy – until it moved. “Their trail led to a hole in a piece of luggage from Nigeria, from which the head of a second giant snail was already sticking out,” said a customs spokesman. The luggage had not been picked up. The living giant snails were probably brought to Germany as a delicacy.

In Naples, an armed robbery has taken a surprising turn. The July 17 incident was captured by the surveillance cameras of the Monidee café in Piazza Trieste e Trento. The victims of the attack are two Swiss tourists. A stocky young man holds a gun to one of the two’s temples, the gunman rips the watch off the bewildered vacationer’s wrist and runs off. About seven minutes later, another young man comes by, raises his arms apologetically and gives the robbed tourist his watch back. It only looks like a real Richard Mille worth around 300,000 euros, but it’s a cheap duplicate.

Man bites police dog: An intoxicated 29-year-old is said to have attacked the officers together with a 35-year-old in southern Hesse near Mainz and then bit the police shepherd Drago in the scramble. “The four-legged friend survived the attack unscathed,” it said.

For ten years, two false nuns have occupied a rectory in Italy and refuse to move out. In the meantime, electricity and water have been switched off in the building, but without the desired result, La Repubblica reported. The responsible bishop has now asked the pastor of the community to force the self-appointed nuns to move out, if necessary with state power. Ten years ago, the two women arrived in the small town of Trevi nel Lazio near Rome. Disguised as nuns, they asked the pastor for temporary accommodation. Since then they have lived in the vicarage – and not alone: ​​one of the false nuns has meanwhile also put her mother there.

A plague of insects has triggered a hunting mood on the streets of New York and other US cities. In some New York areas, sidewalks are strewn with killed insects, while in other cities, people are meeting to trample together. The target of the attacks is the Spotted Lanternhopper Planthopper, an invasive species introduced from Southeast Asia that is becoming an increasing threat in the United States because it damages various plants. In any case, the Pennsylvania Department of Agriculture officially calls on citizens to hunt: “Tread them down, beat them to death”.

The city of Mannheim hung up a bridge sign with the year of birth of ex-Chancellor Helmut Schmidt and had to take it down again immediately. The year of his birth was 1915 on the sign for the newly named “Helmut Schmidt Bridge”. But the SPD politician was born in 1918.

A drunk man made a mistake in the apartment in Upper Swabia and broke open the door to a stranger’s apartment. The man tore the door out of the frame with “simple force,” said a police spokesman. Then the man went into the apartment, put his wallet on the sofa and put on a T-shirt from the closet. By the time the police arrived at the scene, the 36-year-old had pulled himself together and found his way to his own apartment in the same building.

A missing person has reappeared in the Heidelberg head clinic. The 75-year-old, who had been unsuccessfully searched for hours, broke through a ceiling in the hospital after more than twelve hours, the police said. The man must have gone into the basement of the clinic, got lost there and finally climbed a ladder into the supply shafts. When the man, who was wearing a neck brace to stabilize himself because of a spinal injury, broke through the ceiling panel the next morning, he held on and didn’t fall. He was rescued unharmed by firefighters.

In Costa Rica, a bishop trained long and hard to be able to celebrate a service at the highest point in his diocese. Like the daily newspaper Nation reported, Bishop Juan Miguel Castro Rojas, 56, of San Isidro de El General lost nine kilos to walk the 20 kilometers to the summit cross of Chirripo (3880 meters altitude).

An 89-year-old woman received a 76-year-old letter from her husband in the mail in Massachusetts. John Gonsalves wrote the letter to his mother from Germany on December 6, 1945. He was a 22-year-old US soldier stationed in Bad Orb, Hesse. John Gonsalves died in 2015, and his mother is also dead. It is not known how the letter appeared in a US Postal distribution center in Pittsburgh, Pennsylvania. ‘Dear Mama,’ Gonsalves had written, ‘got another letter from you today and I’m glad to hear you’re all right. As for me: I’m fine and doing well. But the food is pretty lousy most of the time.” His widow Angelina Gonsalves was very happy about the lines: It feels like her husband has returned to earth once again, she told local broadcaster WFXT-TV.

In North Rhine-Westphalia, the police went on a curious mission: a girl rode her pony to a supermarket in Attendorn in the Olpe district. According to the announcement, the 15-year-old asked if it was allowed to bring a horse. The pony used this brief moment to relieve itself. It “apples in the area of ​​the scales in the fruit and vegetable department,” writes the police. A scale was damaged. The officers took the girl’s personal details and informed her parents. They were “surprised”.

A four-year-old boy went on a joyride in his mother’s car in Utrecht, the Netherlands, unnoticed. However, he did not get far, as the police said: after a short time he rammed two parked cars. He then ran away in his pajamas and barefoot.

The search for a presumably free-roaming big cat in the Lausanne area has ended. A woman had reported to the police that there was a lioness in her garden in Epalinges and sent a photo of it. The police then went on a large-scale operation. Paw prints were found, the broadcaster SRF quoted the cantonal police of Vaud. The animal is probably a dog.