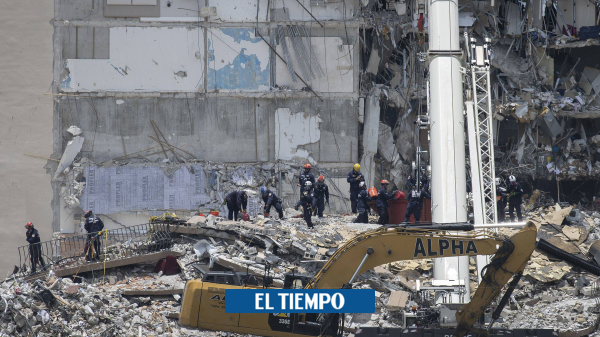 Almost a week after the collapse of a waterfront building in floridathe death toll rose to 18 on Wednesday, including two children, while 145 people remain missing and hope of finding survivors dwindles.

Part of the Champlain Towers South complex located in Surfside, near Miami, collapsed early Thursday morning in one of the worst urban disasters in US history.

The collapse of the Champlain Towers South complex block constitutes one of the worst urban disasters in the history of the United States.

“It is with a heavy heart and true pain that I must tell you that these two people were children, ages 4 and 10,” he added.

There are 145 people linked to the property of whom there is no news, including 29 Latin Americans from Argentina, Colombia, Paraguay, Venezuela, Uruguay and Chile. A Venezuelan and a Uruguayan-Venezuelan were identified among the deceased.

The colonel Golan Vach, commander of the Israeli army unit helping with search and rescue operations, explained that he and other rescuers had found what he called tunnels through the rubble, and in one case that space was between the balconies of collapsed apartments.

“Between them was a large air gap,” he said. “We crawled through those tunnels. We called people and unfortunately we didn’t find anything.” Vach said the chance of finding survivors so long after the collapse was “very, very slim.”

“We have to be realistic,” he said. A Venezuelan and a Uruguayan-Venezuelan were identified among the total of deceased. There are at least 29 other Latin Americans who have not yet been heard from: nine from Argentina, six from Colombia, six from Paraguay, four from Venezuela, three from Uruguay and one from Chile.

(Besides: How long can a person survive under the rubble?)

Champlain Towers South, 12 stories tall and built 40 years ago, stood out with its beige silhouette amid modern glass-fronted residential blocks. The complex had 136 apartments, occupied by their owners or rented. It was the units with ocean views that collapsed for some reason and are still being investigated.

US President Joe Biden will visit the site on Thursday with First Lady Jill Biden.

The partial collapse of the building summoned rescuers and experts from across the United States and also from Israel y Mexico. The team of 15 Israeli experts arrived on Sunday.

The president of United States, Joe Biden, He will visit the site Thursday with First Lady Jill Biden to make sure state and local officials have everything they need to go about their jobs and to comfort the families of the victims.

Residents of the Champlain Towers South apartment block that did not fall said they woke up around 1:30 am (0530 GMT) on June 24 to a rumble that sounded like thunder and shook their rooms. “It was like an earthquake,” Janette Agüero, who escaped from the 11th floor with her family, told AFP. Firefighters who arrived moments after the fall helped evacuate dozens of residents and pulled a teenage boy alive from the rubble.

But since then, no one has come out of the ruins alive, despite the large number of rescuers who work with the help of cranes and sniffer dogs, in stifling heat and amid intermittent rain and thunderstorms. “There are currently 210 people working on the site,” the county mayor of Miami-DadeDaniella Levine Cava.

A group of 10 rescuers from Israel arrived in Surfside, Florida, USA on Sunday to collaborate with the rescue efforts.

“A combination of factors”

Experts are analyzing possible pre-existing critical flaws in the structure of the apartment tower. In April, the president of the association of co-owners of Champlain Towers South, Jean Wodnicki, had warned residents that her building, built in 1981, was suffering from increasing “deterioration”.

As Agüero told AFP, “the garage always seemed to be in poor condition, there were cracks, it was flooded all the time.” But engineer Allyn Kilsheimer, sent by the city of Surfside to investigate the cause of the collapse, told CBS on Wednesday that he hadn’t detected anything that suggested a collapse was imminent. Probably “a combination of factors” caused the drop, he said.

The expert, who provided advice after the attacks on the 11-S and the Mexico City earthquake in 1985He said “all sorts of things” could have played a role, from an “explosion” to “a car hitting a column” to “problems with the roof slab or foundation.” Investigators estimate it will take months to find out exactly what happened.