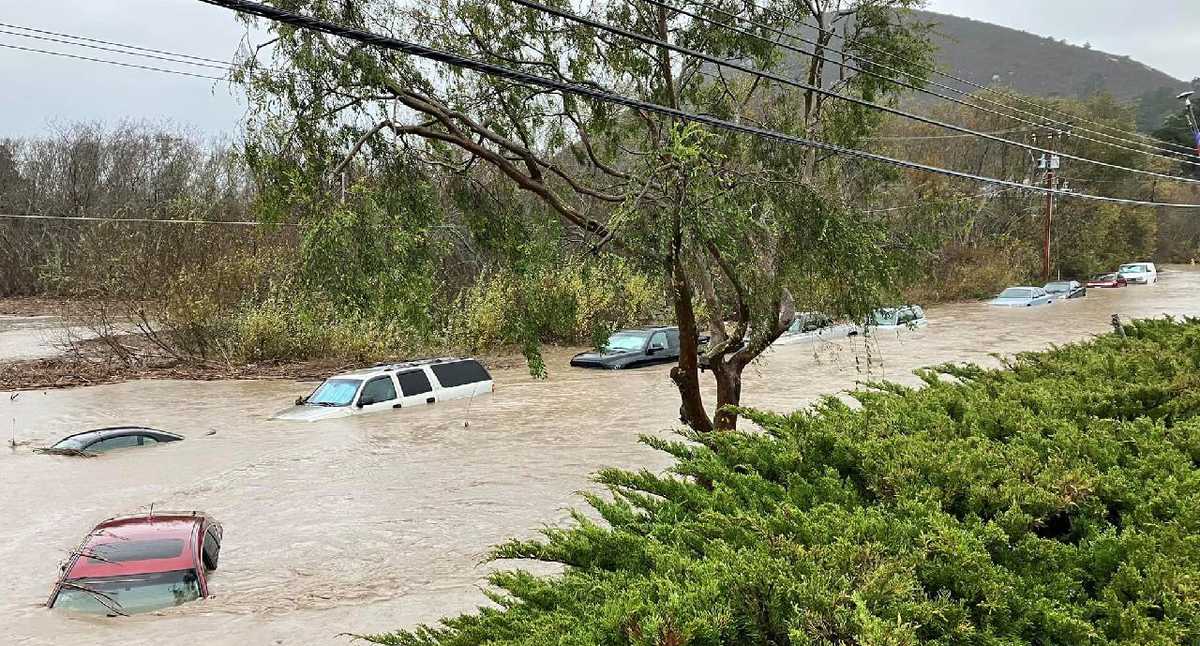 A series of storms has hit the state of California in recent days, leaving 12 people dead and multiple injuries so far in various regions of the so-called ‘golden state’, which has received a high amount of rainfall in recent weeks. .

According to the National Weather Service of the United States, the rains will continue for several days, affecting southern areas of the state, while the Sierra Nevada mountains could receive up to 1.8 meters of snow.

The same state governor, Gavin Newsom, declared a state of emergency last week, as did President Joe Biden, as a result of the heavy rains registered in the last hours.

California — we’re expecting another round of serious winter storms to hit tonight.

We’re in close contact with the @WhiteHouse to ensure we have the aid we need as we prepare on the ground.

Listen to warnings from local officials and stay safe. pic.twitter.com/0xjsRjfcMj

In a statement, President Biden authorized the Department of Homeland Security and the Federal Emergency Management Agency (FEMA) to “coordinate all disaster management measures and alleviate the suffering caused by the emergency on local people”.

Thus, it has highlighted the need for “provide the necessary assistance (…) to save lives and protect private property, while reducing the threat of a catastrophe in counties such as El Dorado, Los Angeles, Mariposa, Mendocino, Merced, Sacramento and Santa Cruz, among others.

The White House approved an emergency declaration in California to complement state, tribal and local response efforts to the recent flooding. We are coordinating disaster relief efforts in the affected areas.https://t.co/7SlSP5K2vB pic.twitter.com/vYfjC8qkSC

This is how in the last hours, the town of Montecito, in California, has sent an evacuation order due to fears that landslides could cover houses in some emergency areas.

This town of about nine thousand inhabitants, including Prince Harry and his family, and which is also the favorite place for celebrities such as Oprah Winfrey and Jennifer Aniston, is prone to receive about 200 millimeters of rain in 24 hours.

The city with multi-million dollar properties is especially vulnerable to landslides, as lies at the foot of a mountain range that was the scene of a fire five years ago that devastated hundreds of square kilometers that they stripped the slopes of the vegetation that normally holds the ground firm.

Former host Ellen DeGeneres posted a video on Twitter of a raging creek. “This is crazy,” she told her followers.

“The stream by our house never flows. It’s probably about nine feet (2.7 meters) high, and it’s going to go up another two feet (more than half a meter).”

Montecito is under mandatory evacuation. We are on higher ground so they asked us to shelter in place. Please stay safe everyone. pic.twitter.com/7dv5wfNSzG

The National Weather Service announced that two major torrential rain events are expected “in connection with two of the most energetic and moisture-laden cyclones heading directly toward California.”

While it’s not unusual to see heavy rains in California during the winter, the current rainfall comes after an intense drought that parched the western United States for more than two decades, which also leads to a large increase in forest fires, in quantity and intensity.

If you do not have to drive, don’t! Please see SBC channel 20 for important info. See https://t.co/CDmCEkPncQ for emergency alerts, shelter in place/evacuation orders, info line, interactive map, and shelters. The rain is not over! Pay attention to alerts and social media. pic.twitter.com/x86gLxRKMO

Among the residents of the town are also Larry David, Gwyneth Paltrow, Katy Perry y Rob Lowe, who would have taken the same precaution when evacuating as ordered by the authorities.

Winter storm in the US: more than 25 million people are at risk in the south of the country

After one of the worst winter waves that has marked the weather in the United States in recent days, a strong storm of rain, wind and snow continues to threaten a large part of the North American territory after the floods presented in the state of California during the weekend.

Some storms have formed in the last hours causing record rains and flooding in some areas, including heavy snowfall in Utah and parts of Arizona. According to CNN, more than 25 million people are under some type of climate threat in the southern United States that extends to Alabama and parts of Georgia.

“Heavy rains, flash floods and severe weather are affecting the region this morning”The US National Weather Service said on its social media.

It’s a rough morning to get up and get going in parts of the Southeast. Heavy rainfall, flash flooding, and severe weather are all affecting the region this morning. Follow your local weather service office for the latest.https://t.co/GWrG0hUpxl https://t.co/HhVbhSjeEC

According to this US weather service, a storm will bring widespread moderate to heavy rains in the valley and foothills between today Wednesday and tomorrow Thursday, January 5. This could lead to rapidly developing road areas and urban flooding, with possible impassable roads and floods in streams and rivers.

The newspaper The New York Times assured that approximately 11,000 people were left without electricity until late last night, a figure cited by Power Outage, which aggregates data from utility companies across the country.

Heavy rains have been recorded in Tennessee, Memphis and Jackson, surpassing their daily record of 54 centimeters in Memphis, increasing the elevated risk of flooding and severe weather in other parts of the national territory.

In the last hours, strong storms also appeared in Arkansas, where the residents of Jessieville They got up this Wednesday morning to clean up the damage caused by the storm.

The National Weather Service had forecast 1 to 3 inches of snow per hour, sometimes accompanied by thunder, with more than 12 inches accumulating in parts of Nebraska, South Dakota and Minnesota.

This is how on the west coast, California is preparing for another episode of heavy rains that can generate floods, dense humidity and torrential rains across much of the state, as well as heavy snowfall in the Sierra Nevada mountain range.

“Everyone please be on the lookout for flash flooding,” Arkansas Gov. Asa Hutchinson said.

Getting reports of flooding in Walnut Ridge and Hoxie from ADEM. Other reports of power outages in South Arkansas. Everyone please watch for flash flooding.

As the newspaper reveals The New York Times, storm preparations are underway across the state, in fact, the California National Guard has installed flood dams and sandbags in Sacramentoand several parks in Northern California are closed due to the threat of strong gusts of wind blowing down trees.

In San Francisco, the rain reached about 13 centimeters in height on the last day of the year 2022, one of the days on which there has been a record of this magnitude since November 1994.

CA is mobilizing for this week’s storm.

The state ops center is at its highest emergency level & the flood ops center is coordinating efforts, like getting sandbags to locals. We’re setting up shelters & are ready to deploy staff to hospitals & ambulance strike teams. Stay safe! pic.twitter.com/akdyXhha8L

— Office of the Governor of California (@CAgovernor) January 4, 2023

Several cars were rescued from the water after flooding in southern California, precisely in the counties of San Bernardino and Orange, where fortunately no injuries were reported.

According to CNN, Damage was reported in northern Louisiana, where several high line transmission towers were damaged in the Haile Community in Marion. One of the towers was brought down and several others were damaged, according to the National Weather Service in Shreveport.

With information from AFP*