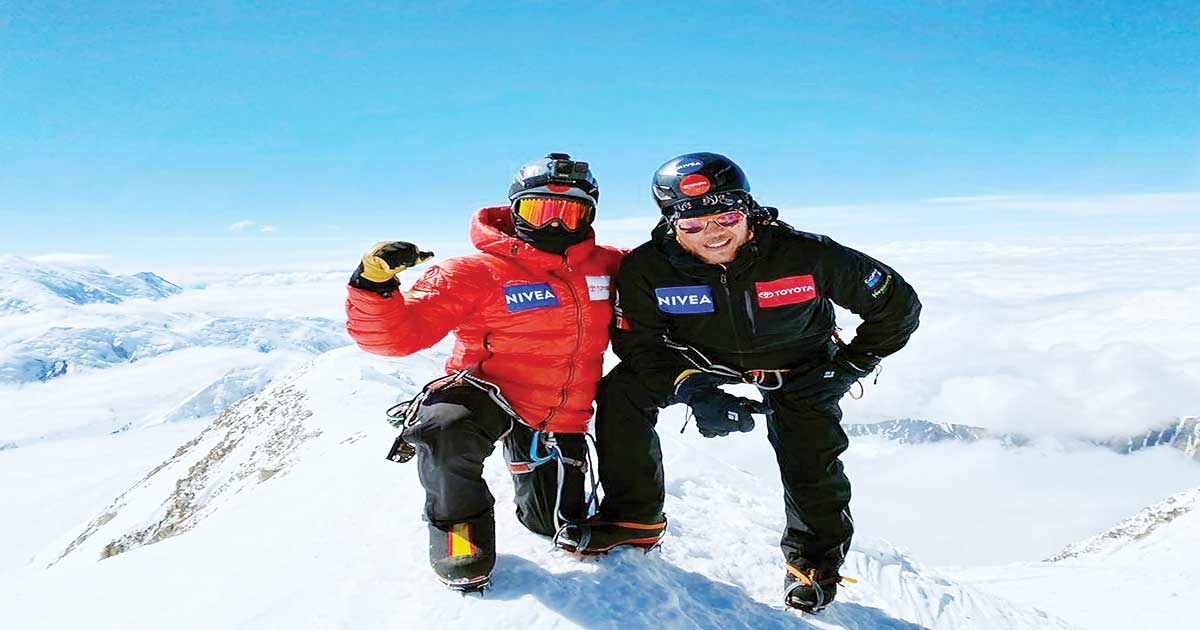 Rafael Jaime’s life has been full of contrasts, lights and shadows, which have given his existence a special meaning. Since childhood, the boy from Durango had to fight battles that placed him in extreme situations. An eye cancer progressively took away his sight.

Rafa found in mountaineering that engine to direct his destiny and the way to challenge himself. The mountaineer, who became the first blind mountaineer to reach the top of Denali, the highest mountain in North America, located in Alaska, told his story for the pages of Excelsior.

My life story is very particular, and it is what leads me to mountaineering. I am a two-time survivor of cancer, at five and at 18, called bilateral retinoblastoma. At five, cancer robs me of sight in my right eye and at 18 it robs me of sight in my left eye and, for obvious reasons, I completely lose my vision. But my blindness is the best thing that has happened to me because thanks to it I have had the possibility of traveling through mountains and deserts. I always seek to aspire to more, in a dignified way ”, he explained.

Reaching the top represents the maximum point of effort and dedication. Being at the summit implies experiencing indescribable sensations that, from the perspective of the 33-year-old athlete, refers to intangible plots that provide tranquility, although it is on the road, when you lack air and the mind betrays, when the romance with the mountain reaches its most sensitive point.

Upstairs my senses are on alert all the time because you are constantly exposed. Almost all the peaks I imagine the same, with soft and clear textures, because they are the result of what you traveled, but I value the path because it is what makes me fall in love. The summit is the cherry on the cake. When you are changing places, the effort, when you lack the breaths of air and the thought is playing tricks on you, that is what I draw on my mountain. We have been in Argentina, Peru, Ecuador and Africa climbing, on Denali and Aconcagua ”, he explained.

Hearing is Rafa’s main battle companion, helping him to locate himself to the point where, over time, he has developed a high-frequency system similar to the sonar of bats, used to locate himself and locate obstacles.

Most people believe that the most important sense for a person who does not see is touch, but no; it is the ear, because it gives you the sense of orientation, of location and of balance, then this becomes fundamental for me. As the years have passed, something called echolocation has developed for me, which is the sonar that bats have, and that through the sound of the environment, footsteps in the snow and in what is around me, I It gives the ability to scan what is in front of me without touching it, like a stone or a hole ”, he asserted.

The Cordada a Obscuras is a project with which they seek to climb the seven highest mountains (Seven Summit). In 2020, Rafa and his guide, Omar Álvarez, became the first Ibero-American rope with a blind mountaineer to climb Aconcagua (6,961 meters) in Argentina. There, the role that Omar plays is transcendental for the fulfillment and success of the challenges they face. As your guide, Álvarez fulfills the mission of being Rafael’s eyes during the journeys, which allows them to complement each other correctly and form a couple in which understanding is absolute.

Normally, people tell me: ‘How does it feel to take Rafa to the Mountain’, but it is not like that, Rafa and I accompany each other, we are a team and we have strengths. It is my turn to have the strength of visual information and Rafa, not being able to see, then I become his eyes during the rope ”, he affirmed.

Rafael Jaime and Omar Álvarez have managed to consolidate a friendship beyond their intense work in the mountains.

Omar has managed to touch fibers in Rafa that go beyond the professional, the arduous and constant coexistence has brought them so close that patience is in each adventure, the food of each day that makes them resist adversity. Finding the balance between physical and mental work is key to causing the daily treatment to take its course in the right direction.

Patience is essential. When we were on Mount Denali, which is the highest mountain in North America with 6,194 meters above sea level, we had to spend nine days sheltered in a tent without being able to do anything and just be him and me. I think it’s about working in physical and mental balance, accompanied by meditation, which has helped me a lot ”.

From the heights, human vulnerability becomes palpable and an oversight, no matter how small, can turn the route into a true sub-zero hell. Tied to a rope and a harness, helped by the helmet, the ice ax and the crampons, Omar and Rafa cling to touch the sky in each climb without forgetting that, at each step, a thin line separates them between glory and exile. .

It is a very particular team, we are talking about your life. Up there you can’t skimp on the equipment, which is a helmet, because it protects you from falling rock or ice, the ice ax is also very important, it is a beak-shaped ax that is your lifeline because there are many falls in the mountains or slips and the ice ax helps to stop you and finally, the crampons, which are few that allow you to hold on to the ice so that you do not slip and the harness we put it where the rope comes from and helps you to brake and avoid a fall, in case the ice breaks ”, he concluded.

The next stop for Roped in the Dark will be Kilimanjaro (5,891 meters), scheduled in September, located in northeastern Tanzania, to crown the most ambitious conquest, the summit of Everest.

Copyright law strictly prohibits copying all or part of Excelsior’s materials without first obtaining written permission and without including the link to the original text.