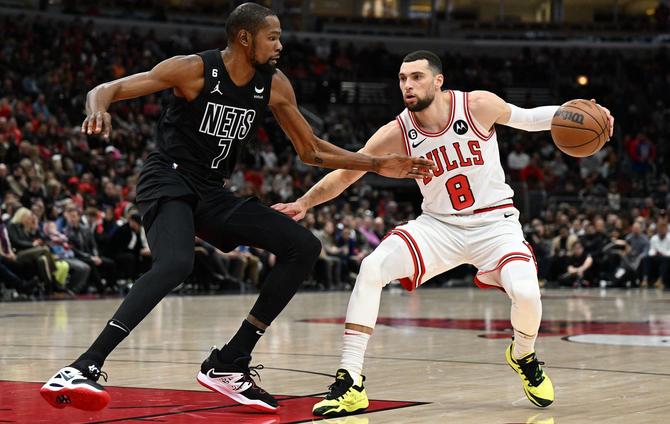 This is the news of the night in the NBA: the Nets have lost. Brooklyn’s series therefore stops at 12 straight wins because Kevin Durant, despite his 44 points, and his gang fell in Chicago, especially against a very good Patrick Williams (22 points). Behind the Nets, the competitors benefit from it. Already Philadelphia who overcame the absence of Joel Embiid to win in overtime against Indiana. James Harden scored 26 points. Then Milwaukee who got scared. The Bucks were 14 points ahead with one minute remaining but the Raptors will snatch an extension! Giannis Antetokounmpo (31 points, 21 rebounds, 10 assists) and Milwaukee will eventually pull through. Finally Cleveland who wins on the wire against the Suns.

Further in the standings, Orlando regained victory after three straight defeats, against the Thunder, when the Knicks dominated the Spurs with an excellent Jalen Brunson. The former Dallas player achieved his career high with 38 points and the New York franchise is, like Cleveland and Philadelphia, on three consecutive wins. After four straight losses, the Hawks scored a major win in Sacramento, going 7-0 to end the game.

For its part, Memphis easily dismissed Charlotte. Ja Morant (23 points) didn’t even need to play the last quarter and the Grizzlies, four straight wins, have the same record as the Western Conference leaders Nuggets. Rudy Gobert’s Wolves (17 points and 12 rebounds) got the better of the Blazers. The Pelicans started life without Zion Williamson, out for three weeks, with a win over the Rockets. Houston is on five straight losses.

The Warriors lost to the Pistons on a 3-point basket at the buzzer from Saddiq Bey. For his return from suspension, Killian Hayes was clumsy with 9 points at 3/12 to shoot, but he distributed the game well with 13 assists without losing a ball. Finally, without LeBron James, the Lakers were able to count on Dennis Schroder, 14 points in the last quarter, to overthrow the Heat. Fourth win in five games for the Los Angeles franchise.