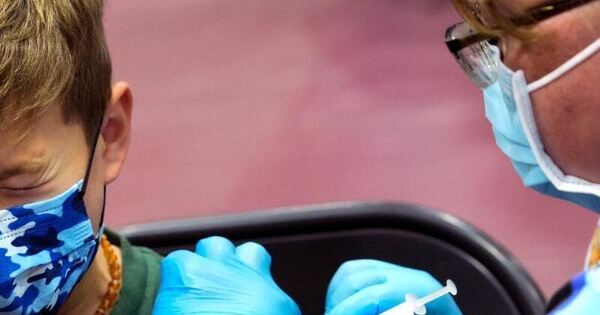 Amsterdam (dpa) – The European Medicines Agency EMA has given the green light for the approval of the corona vaccine from Biontech / Pfizer for children aged five and over.

This was announced by the EMA in Amsterdam. It will be the first corona vaccine to be approved in the EU for children under the age of twelve. Officially, the EU Commission now has to give its approval – but this is a formality.

Children aged five and over should only receive a third of the adult dose from the Biontech / Pfizer vaccine and two doses every three weeks. The EMA emphasized that studies have shown that the vaccine is safe and effective. So far, no serious side effects have been found, at most mild reactions such as fever, pain at the injection site, fatigue or headache. The experts had checked studies by the manufacturers since October.

So far, this vaccine has only been approved in the EU for people aged 12 and over. But in Israel and the USA, children from the age of five can be vaccinated with it.

According to Federal Health Minister Jens Spahn (CDU), 2.4 million doses of the Biontech / Pfizer vaccine will be available for children in Germany as of December 20. Further deliveries are expected in the first few months of the new year.

Children rarely get Covid-19. But, say the EMA experts, they too could get seriously ill. The benefits of vaccination should therefore be rated higher than possible risks.

However, the decision of the EMA does not mean that vaccination of children is now also recommended. The EMA emphasizes that national governments or health authorities would have to decide that. In Germany, an expert opinion from the Standing Vaccination Commission (Stiko) is expected. She wants to give her recommendation on the corona vaccination for children from five to eleven years before the end of the year.

Weighing up the benefits and possible “residual risks”

The chairman of the Stiko, Thomas Mertens, expressed understanding for parents who are skeptical. “I can understand that very well, and it basically corresponds to the problem that Stiko is facing with its recommendation – namely weighing up the benefits and possible” residual risks “for children in this age group,” said Mertens of the “Schwäbische Zeitung” ».

In an approval study by the company Biontech / Pfizer, no serious vaccine reactions or side effects were documented, said Mertens. After a relatively short observation period, the effectiveness of the vaccine in the children was also roughly the same as that in the adults. However, the figures from the current studies are not sufficient to rule out rare side effects. You have to include the results of previous studies and application data. Preparing the decision on a recommendation, said Mertens.

A second vaccine for children could follow soon. The EMA experts are currently examining an application from the US manufacturer Moderna.

Information from the EMA