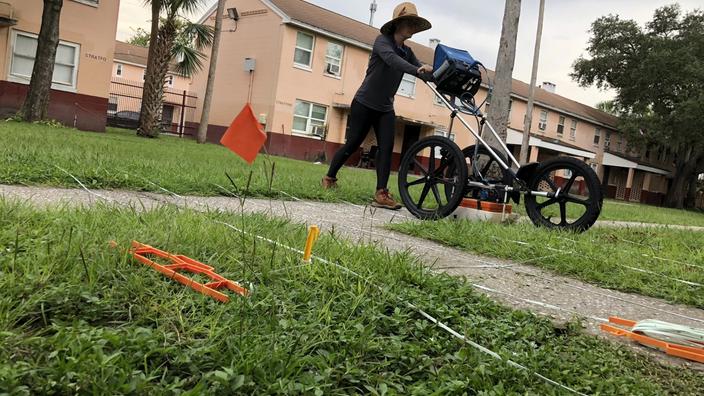 ARCHEOLOGY – The graves discovered under a school in the 1950s bear witness to the disappearance of many African-American places of memory in the southern United States.

They had been forgotten under the school. Twenty-nine unmarked graves in the former African-American cemetery at North Greenwood Cemetery have been found during a search campaign by the Florida Public Archeology Network, US archaeologists have said. If these exhumations confirm the first surveys carried out by radar several months ago, they are first and foremost part of a cycle of rediscoveries of several Floridian cemeteries abandoned in the middle of the 20th century.e century.

The history of North Greenwood Cemetery, in Clearwater, Florida, resembles that of many other African American cemeteries in the region. Wedged between the Bay of Tampa and the Gulf of Mexico, this cemetery inaugurated in 1940 had time to accommodate 350 deceased before being sold in 1954 – at a time when racial segregation was still in effect – to make way for a school and a municipal swimming pool. And if, at the time, the remains had been exhumed and transferred to a nearby cemetery, further north, several of them had been forgotten or abandoned on the spot. “We discovered material that we expected to see associated with graves“Said excavation director Jeff Moates, quoted by WJCT. «We found an intact aluminum headstone in the name of the deceased Mr. William Ridley who was buried in 1951Said the archaeologist. Other remains discovered include two 1940 and 1942 coins, as well as the remains of decomposed coffins and fragments of tombstones.

The excavation site attracted residents, including several elderly people who still remembered the memory of the small cemetery. One of them, now 81 years old, confided his memories to the director of the excavation. “He remembers playing in this cemetery when he was a child»Testified Jeff Moates. «He remembers being there and hunting rabbits, quail and pigeons with his friends. He also had a Boy Scout friend, who sadly died on a Scouting trip and was buried in the cemetery.»

The North Greenwood Cemetery case highlights the disappearance of many African-American places of memory in the Tampa area. Far from being an isolated case in the United States, the subject returned to local prominence from 2019, thanks to the rediscovery of Zion Cemetery, Tampa’s first black cemetery, active from 1901 to early from the 1920s. The study of part of the terrain with ground penetrating radar revealed that at least 300 graves remained buried on the site which is now occupied by a residential subdivision and a warehouse.

Read alsoRacism: the United States in the sights of the UN

As of June 2020, the site of another ancient African American cemetery, the St. Matthew Missionary Baptist Church Cemetery, had been located and the radar signature of at least 70 graves had been identified. The cemetery was closed in 1955 due to cash flow problems. Four other similar sites were also found in the region the same year, including one located under a US Air Force base. Asked by the Tampa Bay Times , a former resident of Clearwater Heights said at the time: “This mystery has gone on for years, but we know the truth now. Finally, we can pay tribute with dignity to the memory of those who have been left behind.»

See Also:  nearly 700 deaths caused by climate disasters in the United States in 2021

Echoing these findings, the US Senate unanimously passed a bill in December backed by more than 60 organizations that could pave the way for the creation of an African-American Burial Grounds Network – a network of venues. African-American burials. This new federal institution could set up a list of historic sites and assist the municipalities concerned in the conservation and enhancement of this forgotten heritage. “We must act now before these sites are lost to the ravages of time or development.»Declared the Democratic senator in December Sherrod Brown.