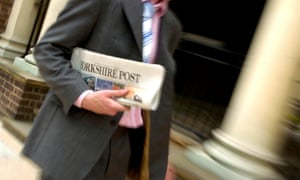 Dozens of UK’s best-known newspapers including The Scotsman and The Yorkshire Post were bought by David Montgomery’s National World for just £ 10.2million in the latest phase of consolidation of the struggling local newspaper market .

JPI Media, which owns 100 local newspapers across the country, including the Edinburgh Evening News, Lancashire Post, Sheffield Star and Sunderland Echo, has struck a deal with National World and will take control on January 2.

Montgomery, the former managing director of parent company The Daily Mirror, has been aiming to secure a buyout deal since National World launched as a publishing consolidation vehicle on the London Stock Market in 2019.

“JPI’s historic publishing brands represent the best of journalism and have reliably served their communities and supported local businesses, in some cases for centuries, and never more than last year,” said Montgomery.

“National World will continue this tradition and implement modern technology to grow the business on a larger footprint based on unique, high-quality content.”

JPI Media, formerly known as Johnston Press, has been looking for a buyer since late 2018 when it went up for sale to try to pay off debts of £ 220million. JPI has rejected all offers made for its assets – including that of rival publisher Newsquest valuing the company at up to £ 120million, with no pension deficit obligation – choosing instead to go into administration.

A day later, JPI agreed to a bailout and restructuring plan presented by its biggest lenders, which involved the cancellation of £ 135million in debt, leaving it with £ 85million in debt.

In November 2019, JPI struck a £ 50million deal to sell the crown jewel is newspaper at Daily Mail and General Trust, the owner of the Daily Mail, Mail on Sunday and Metro.

In October, JPI Media sold its printing plants, in Portsmouth, Dinnington and Carn, to DMGT.

Last year, the listed Reach, which owns headlines in national and regional newspapers including the Daily Mirror, Daily Express and Manchester Evening News, offered £ 50million to buy JPI Media, but s’ is subsequently withdrawn from the agreement.

Earlier this year, Norwich-based Archant, which publishes more than 50 local titles including Eastern Daily Press and Ham & High, sold a controlling stake to private investment firm Rcapital in an attempt to consolidate its finances.

In 2012, DMGT sold its local newspaper business to Montgomery’s Local World, a joint venture comprising more than 100 regional titles, valued at £ 100million at the time. Three years later, Reach, owner of Mirror and Express titles as well as local titles including the Birmingham Mail and Manchester Evening News, took over Local World in a £ 220million deal.

The decline of the regional newspaper industry has been steep. In 2005, Johnston Press – now JPI Media – paid £ 160 million to buy the Scotsman newspaper group from the owners of The Telegraph, the Barclay Brothers. During the administration process in 2018, creditors acting for Johnston Press ascribed a value of just £ 4.3million.