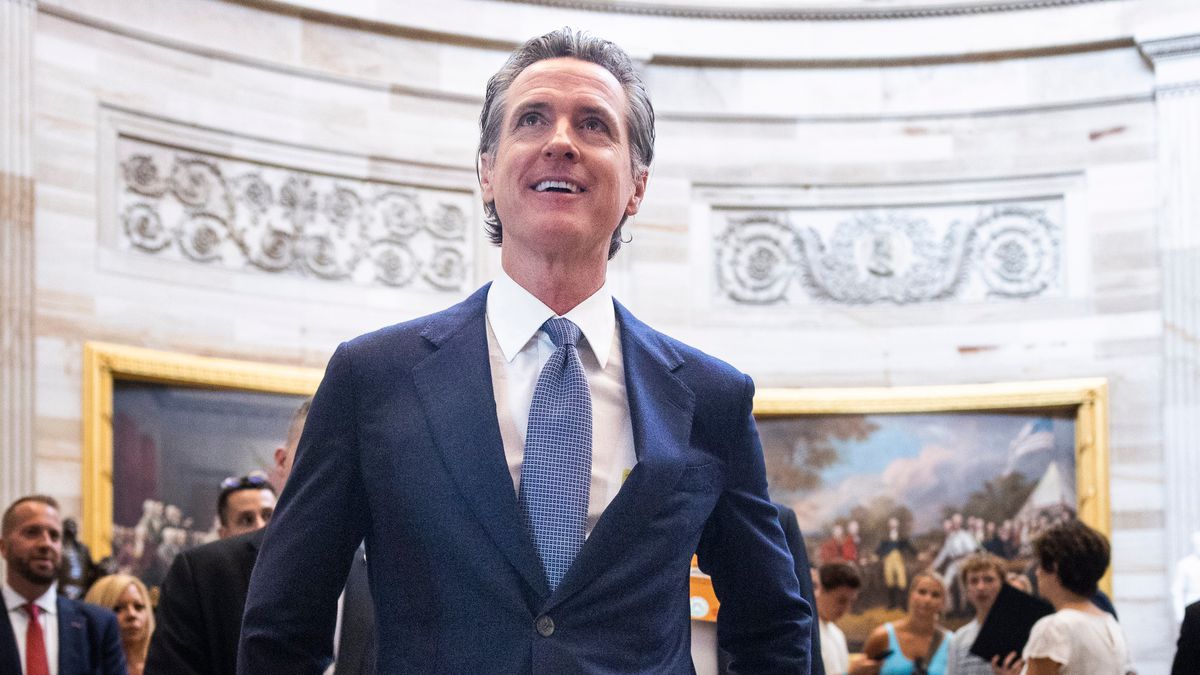 “It’s not even on my radar. I have below zero interest.” This is the response that Gavin Newsom, governor of California, gave at the end of May to the editorial board of the newspaper San Francisco Chronicle when asked if he is interested in the race for the presidency of 2024. Several weeks have passed since then and the 54-year-old president, despite denying it, seems to test the waters of the succession. At the head of the most populous state in the country, with 40 million people, the Democratic politician has been willing to contrast with the narrative of the Republican party and raise his voice harshly on issues such as the regulation of weapons and abortion. Meanwhile, President Joe Biden, who turns 80 in November, sees his popularity rating slip and doubts arise about his possible re-election bid.

It seems that Newsom (San Francisco, 1957) has been bitten by the Potomac bug, as they call in Washington, half jokingly, the great aspirations of politicians. The governor has presented some of these symptoms. Last week he was in the capital while Biden was on tour in Saudi Arabia, fueling rumors about his ambitions. There he met with the veteran Californian politicians Nancy Pelosi and Diane Feinstein. And also with Vice President Kamala Harris, an old acquaintance of Newsom. They both had the same mentor, San Francisco Mayor Willie Brown.

In mid-June, Newsom joined Truth Social, Donald Trump’s social network. He was one of the first Democrats to break through the morass of Trumpism. He did it to “expose the lies of the Republicans.” In his first post, he talked about the high murder rates in GOP-controlled states. It was a way to nullify one of the opposition’s favorite attacks: that big US cities (mostly controlled by Democrats) have high crime rates. “Eight of the ten states with the most homicides are red. What local policies have allowed such carnage?” asked the governor rhetorically, who has embarked on a crusade in favor of strict regulation of weapons.

Before the Supreme Court repeal the right to abortion in the United States, Newsom coined one of the phrases that have resonated most recently for Democrats. “Where the hell is my party? Where is the counterattack? What if, [los republicanos] they are winning. Do you really think gay marriages are safe in America? Of course not,” he said in May, after conservative Justice Samuel Alito’s vote was leaked. In Newsom’s calculations, the November midterm elections will be defined by social issues like abortion rights and not the economy. The polls they seem to dispute their sense of smell. With his phrase, the governor asked to go on the offensive in the midst of a party that is criticized for being lukewarm by its most left-wing sectors.

Newsom, the son of a local judge, represents the way of doing politics in San Francisco, the city where he began his career and one of the bastions of progressive politics in the United States. The owner of Plump Jack Wines, a chain of wine stores and restaurants, since 1992, he jumped into politics in the 2000s. He became mayor of the city in 2003, when he was 36 years old. He was then married to Kimberley Guilfoyle, whom he divorced shortly after taking office. Guilfoyle, host of the Fox News network, has been a partner of Donald Trump Jr., the son of the former Republican president, since 2018. Since 2008, Newsom has been married to Jennifer Siebel, a Stanford-trained documentary filmmaker and actress. They both have four children.

In February 2004, Newsom made national news for his outspoken support for gay marriage. He granted hundreds of permits despite the fact that some figures in his party, such as Senators John Kerry and John Edwards, who were fighting for the Democratic nomination for president, rejected marriages and preferred civil unions. “In many ways we represent the future of this country,” Newsom told this newspaper that year. California experienced a conservative wave in 2008 that banned this type of wedding after a referendum. The Supreme Court legalized them throughout the country in 2015. And today they seem to be in danger again thanks to the conservative majority that occupies the constitutional court in Washington.

Newsom showed that he doesn’t mind going against the grain. Became Governor of California in January 2019 and his leadership at the forefront of the pandemic was only tainted by a social scandal. In November 2020, in the toughest months of the pandemic, he was caught attending the birthday party of one of his advisers at the French Laundry, an exclusive Napa Valley restaurant, along with other guests. The governor, leading one of the strictest responses against the coronavirus, was caught breaking the precautionary measures he had decreed. It was a serious blow to his popularity. The anger motivated even an impeachment attempt that passed with 64% of votes last year.

His efforts in 2021 focused on surviving. This year, however, he has broadened his sights. The governor spent $105,000 on propaganda in Florida, a territory 4,000 kilometers from the land where he governs. There he stood up to Ron DeSantis, one of the favorites among Republicans for the presidential candidacy. His goal is to respond to the practices that conservatives have put in place as part of the ongoing culture war. His government, for example, copied the legal model with which Texas allows people who help a woman to have an abortion to file a civil complaint. Except that instead of doing it with abortion, which is protected in California, victims of armed violence can sue weapons manufacturers since July 12.

We’re about to celebrate Independence Day — but Freedom is under attack by Republican leaders in states like Florida.

It’s time to stand up. Don’t let them take your freedom. pic.twitter.com/cFI5UzgZzX

California has given three presidents to the United States. The last one was Ronald Reagan. Before Richard Nixon and Herbert Hoover. They were all Republicans. Arnold Schwarzenegger also tested the waters, but the Constitution prevented him from running for president. No Democrat has ever made it out of California and into the White House, though many have tried. Mainly, Jerry Brown, who tried his luck three times in the primaries. He ended up concluding that the governor of California was a “career finisher” position.

See Also:  The governor of California plans to fully open the economy by June 15

Even as Newsom climbs the succession ladder, Kamala Harris will still be there. The vice president and the governor already avoided a fratricidal war in 2013, when the two set their sights on the race for the governor’s post. A free seat in the Senate, occupied by Harris, prevented greater evils between the two friends. Bakari Sellers, a CNN commentator close to the vice president, recently compared Newsom to Icarus. “Sometimes it flies too close to the sun,” the analyst said.

In May, in the same talk with the Chronicle in which he was asked if he would seek the presidency, Newsom said no. He then added: “I hope that Kamala Harris will be the next president of the United States.” A lot has happened since that interview.

subscribe here to the newsletter of EL PAÍS América and receive all the key information on current affairs in the region.