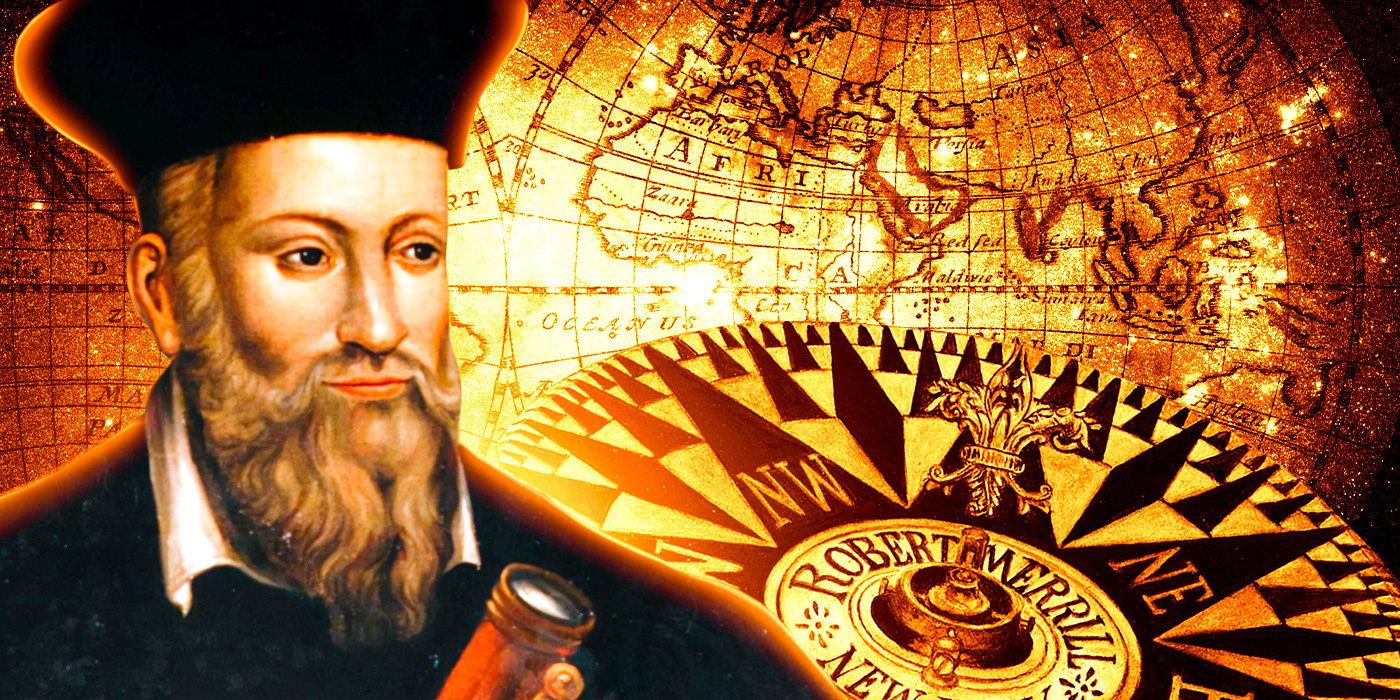 The famous astrologer and soothsayer Nostradamus died almost 470 years ago, but people still believe in his predictions. Books continue to be bought up in huge numbers, and on January 1, 2023, the popular tabloid Daily Mail published a very unpromising alignment of Nostradamus for the next year (according to him, it will definitely not be better than in 2022 – on all fronts). But who was this person really and what makes many in the era of “iPhones” blindly believe the words of an astrologer from the deep past? Let’s talk about it today with fill it.

Was a capable doctor, but became a famous soothsayer

In almost any crisis period in history, colored by bad weather and sorrows, there was an oracle, in whose words both a villager and a respected nobleman began to sincerely believe. For the 16th century and beyond, this was the Frenchman Nostradamus, who, according to his compatriots, predicted the death of the French monarch himself.

Michel de Notredam was born in the family of a notary in the commune of Saint-Remy-de-Provence in southeastern France. As a child, he was an ordinary child, and none of the biographers attribute early superpowers to him. Little Michel was educated by his grandfather, who taught him Latin, Greek, Hebrew and astrology. In the future, Michel decided to connect his life with the profession of a doctor. After studying, he received a doctorate, began to subscribe to the Latin mode Nostradamus and especially succeeded in the fight against the plague. For his successes, he was even given a lifetime pension in Aix-en-Provence, but at the same time, the doctor could not save his family from illness – in 1537, his first wife and children died from the plague.

But medicine is not the only area that attracted Nostradamus. The Middle Ages is the high point of the alchemists who were looking for the philosopher’s stone, and other romantics and astrologers who tried to look into their own and others’ future. Nostradamus was no exception to the rule.

In the 1550s, he began to publish his astrological studies and centuries, predictions in verse form for centuries to come. True, these exercises contained many errors, other astrologers were rather hostile to his activities. Even the Inquisition became interested. The authorities were going to interrogate him about what teachings he practices. But Nostradamus managed to avoid responsibility and become a very popular fortune teller, including at the royal court. And this is where it all started.

In 1559, after long conflicts, a truce was concluded between France and Spain. The daughter of King Henry II married the Spanish king Philip II. On this occasion, a large-scale celebration was held in Paris, they were going to hold a jousting tournament. The 40-year-old monarch also took part in it, eventually converging in a fight with the Scottish earl Gabriel Montgomery, an officer who served at the king’s court. After another collision, Montgomery’s spear broke, and the fragment that remained in the hands of the Scot unexpectedly hit the king in the part of the helmet that was slightly open, damaging his forehead and eye. The injuries were incompatible with life, and 10 days later Henry II was gone. Before his death, Henry removed all guilt from Montgomery, but he was still expelled from the country.

You ask: what does Nostradamus have to do with it? After the death of the king, the French remembered the prediction contained in one of the books of the oracle. It looked like this:

The young lion will overcome the old
On the battlefield in a single duel,
He will gouge out his eyes in a golden cage.
Two fleets – one, then
die a cruel death.

The omen, admittedly, is rather vague and far from specific, but it still allowed us to see real characters behind the ornate syllable. Firstly, Montgomery was indeed younger than the king, secondly, the spear hit the king in the eye, and thirdly, death was painful. All these amazing coincidences made me see a real seer in Nostradamus. His poetic predictions began to be discussed wherever possible. Even in correspondence between diplomats.

At the end of 1560, the new French monarch, Francis II, fell seriously ill, and the Tuscan ambassador Niccolò Tornabuoni wrote to Duke Cosimo de’ Medici following: “The health of the king is very uncertain and Nostradamus in his predictions for this month says that the royal house will lose two young members from an unforeseen illness”. As a result, a few days later, the 16-year-old king died of gangrene, and soon another representative of the royal house was gone.

All this analytics of the future from Nostradamus made him an extremely popular person. To create a horoscope for his son, he was invited to Nice by the Duke of Savoy, and in 1564 King Charles IX himself came to visit the astrologer together with his mother Catherine de Medici. During a meeting with Catherine, Nostradamus announced that her son was expected to marry Elizabeth of England. This prediction did not come true, but created a lot of noise among the Spaniards, who were afraid of losing their alliance with France. According to other sources, the Medici twice called the soothsayer to court to consult about her family.

In July 1566, Nostradamus was found dead after another trip to the king, in which he, along with the embassy, ​​represented his city of Salon. The cause of death is said to be cardiopulmonary edema. The astrologer was buried in the Church of the Cardeliers, but at the end of the 18th century, the sans-culottes (revolutionary-minded residents of the city and partially villages) defiled his grave, scattering the remains.

According to local legend, a resident of Marseilles in a frenzy grabbed the skull of Nostradamus and even drank from it.

As a result, the mayor of the city collected all the bones that could be found, and they were reburied in another church.

Both during his lifetime and after his death, Nostradamus was actively criticized and hated. A certain French Hercules while the astrologer was still alive spoke out about him, without particularly choosing expressions: “A brainless and crazy idiot who screams nonsense and publishes his predictions and fantasies on the streets.” But Nostradamus’ predictions stretched back centuries, and despite all the criticism, he remains in demand to this day. According to fans of his work, it was he who predicted the Great Fire in London, the French Revolution, the Kennedy assassination, and even the rise and fall of Adolf Hitler. By the way, Nazi propaganda saw in the words of Nostradamus a certain force that influenced people, and leaflets were scattered over Belgium and France that supposedly an ancient oracle predicted Hitler’s success.

In 1999, the Austrian scientist and politician Alexander Tollman, based on the prophecies of Nostradamus, announced the impending end of the world and hid from him in a bunker in Lower Austria. True, the Apocalypse did not come, the prediction did not come true, and Tallman still had to leave the bunker.

However, such blunders do not seem to affect the audience in any way, since interpretations of Nostradamus’ predictions are still in trend. For example, in September 2022, Nostradamus: The Complete Prophecies of the Future by writer Mario Reading topped the Sunday Times bestseller list. Reading died in 2017, but he wrote during his lifetime that Nostradamus predicted the death of Queen Elizabeth at about 96 years of age. The monarch, as you know, died exactly at the age of 96. But the forecast that the next king of Great Britain will be Prince Harry did not come true.

But why do people believe in Nostradamus’ predictions, even if he was often wrong? The answer is simple enough. Firstly, his predictions are very vague, they do not contain specifics, and any factual base can be matched to the words of an astrologer. Secondly, we live in an extremely difficult time, when a person is often unable to rationally know what is happening around, so he turns to the experience of predictions for help. “In moments of great change or social unrest, we tend to look for explanations. We want the past and future to make sense for the narrative», — quotes The Guardian by British historian Dan Jones.

Of course, Nostradamus was a very curious character for his era. At the same time, we do not forget that in those days many believed in otherworldly, mystical dragon-like monsters, which, in one of the novels of Vladimir Korotkevich, swam in Lake Lepel. Years fly by, and something tells us: the predictions of the famous astrologer will disturb a person for a long time, despite our advanced and technological world.

Special project prepared with the support of Statuskvo LLC, UNP 101011505.

Our channel in Telegram. Join now!

Have something to talk about? Write to our telegram bot. It’s anonymous and fast