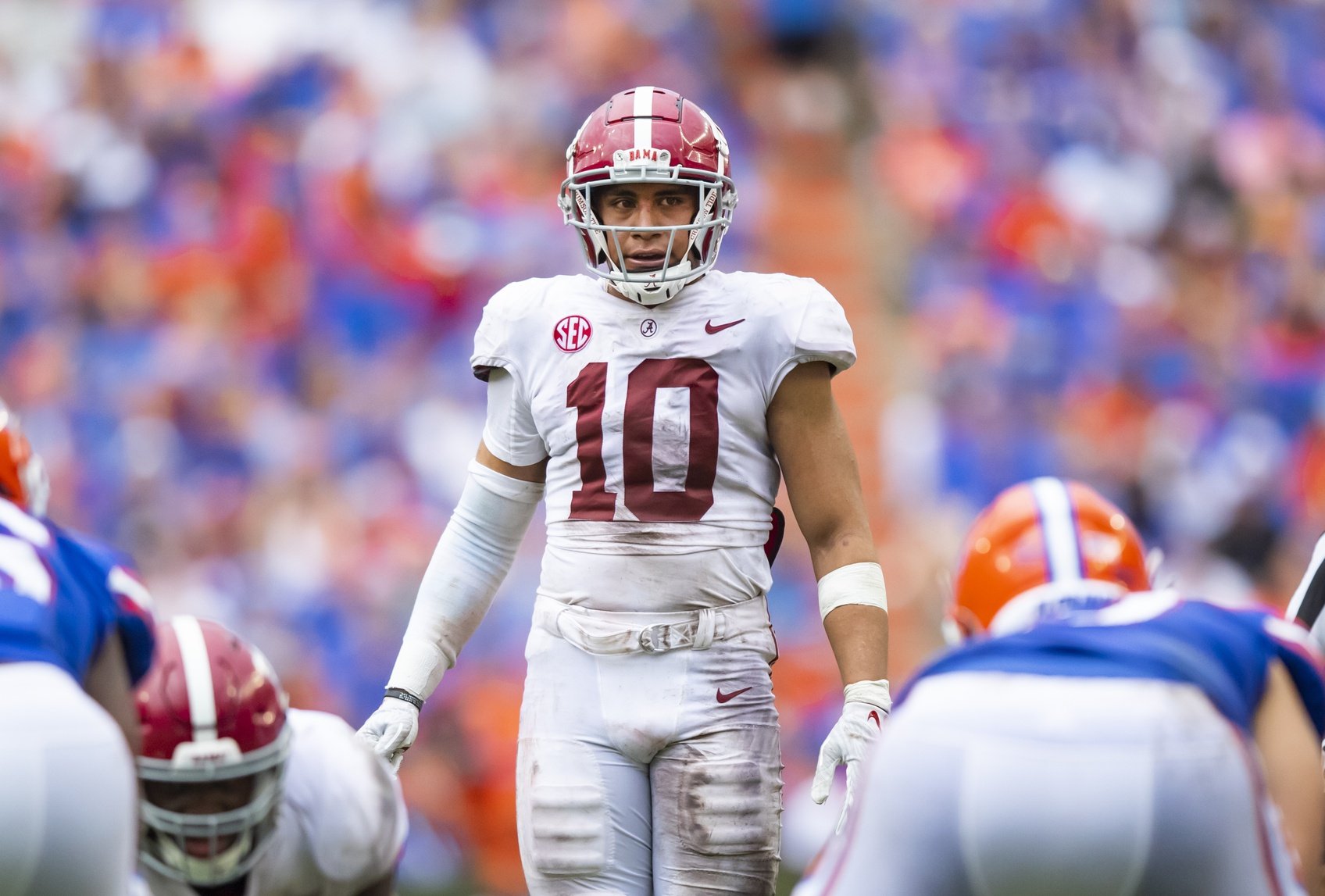 With his 2023 NFL Draft scouting report, can Alabama LB Henry To’oTo’o take home the LB1 mantle next April? It’s a title that many Crimson Tide linebackers before him have achieved. Now, To’oTo’o is on a mission to accomplish just that in the 2023 cycle.

In a way, To’oTo’o’s college career has already come full circle. Alabama chased the former four-star LB recruit out of high school. But the Concord, California product instead signed with the Tennessee Volunteers.

To’oTo’o would go on to play for Tennessee for two seasons. As a true freshman, he became an immediate contributor on defense, racking up 72 tackles, five sacks and two pass deflections in 2019. His production held steady in 2020 as To’oTo’o added 68 tackles, 7.5 tackles for loss, a sack, a pick, and two more pass breakups.

Making a name for himself on the SEC stage, To’oTo’o chose to enter the transfer portal and harness his performance to an even greater destination. That choice ultimately landed him in Alabama.

He came to the Crimson Tide two years later than they would have preferred, but his addition was worth it nonetheless. To’oTo’o recorded 111 tackles, 7.5 tackles for loss, and four sacks in 2021, earning him second-team All-SEC honors. Now, To’oTo’o is one of the top linebacker prospects in the 2023 NFL Draft cycle, and the stakes are rising.

Modern NFL linebackers are becoming more diverse and versatile, but the traditional LB mold still has its place. How does To’oTo’o combine elements of both archetypes, and what kind of draft material could it feature when the 2023 NFL Draft rolls around?

The positive of To’oTo’o

At 6’1″, 230lbs, To’oTo’o has a solid frame with good density and length. He’s not an elite-sized threat, but his length value is compounded by his high-end explosiveness. To’oTo’o is a supremely explosive athlete who accelerates extremely quickly when activated on plays. He launches from his platform with an intense burst and can instantly speed up to match players, closing gaps with immediacy.

In the area, To’oTo’o’s explosiveness gives him excellent range. It can track through the formation and neutralize zone runs. The Alabama LB also moves with excellent crunch and can accelerate up and down quickly. He is an agile side athlete who can cover ground and match runners with energetic random steps.

To’oTo’o’s hips are loose enough that he can quickly recover from small changes of direction. It also uses active feet and moves around a lot in tight spaces. The Alabama LB has enough fluidity to fit in space and swing his hips when responding to wrong directions. Additionally, To’oTo’o can use sudden movements to stay clean in congested areas.

To’oTo’o doesn’t have an elite composite athletic profile, but his processing power helps maximize his tools. The Alabama LB has shown that he can quickly process moves and introduce directions of play. He is visibly fast with his processing and reaction speed, and is also an active pre-snap communicator who can recognize formations and get his teammates into position.

To’oTo’o can instantly shoot through tight seams to hamper ball carriers, and he has a great combination of patience and decisiveness in the jam. Alabama’s LB has shown he can identify running backs and tight ends sneaking on the flats, thereby tracking them down the sideline. To’oTo’o is an adaptive processor that can recalibrate itself when faced with wrong directions and quickly identify open targets to pursue. He keeps his composure when patrolling gaps and can use quick side bursts to switch gaps and track down RBs.

Going further, To’oTo’o can masterfully combat option plays in space. Not only can he actively sink his shoulder to scrape blocks, he can also take out angles with his positioning, then quickly switch focus to secondary runners when throws occur. He has enough long-range speed to track plays down the sideline and take angles upfield, and he can match RB on wheel routes as well.

Overall, To’oTo’o is a high-energy competitor who exudes urgency on every play. The Alabama LB hits the WRs hard at the capture point, actively aiming to dislodge the ball. He can also get in the hole and violently attack leading blockers on inside runs. With his length and strength of play, To’oTo’o can clog H-backs and crash runs early. He and he actively squares and stretches inside the torso when he is facing locks.

To’oTo’o can throw main blockers off balance with his extensions and spread and throw hard. It has enough play strength to fling blocks into space, and can violently rip apart anchors and throw outside blockers. As a tackler, To’oTo’o has shown that he can use his length to wrap up and take down ball carriers. He is an aggressive tackler who actively reaches out and wraps up opponents.

Expanding on To’oTo’o’s tackle, the Alabama LB provides a great closing burst, and his length allows him to gain leverage on ball carriers and slow them down before they can explode upfield. He can lead with his shoulder and play through the tackle point, and he got better at driving through tackles as the season went on. He rarely chases excessively, and when he does, he’s shown to be quite fluid redirecting into the tackle box in no time.

Elsewhere, To’oTo’o has shown he can follow the quarterback’s eyes in coverage and get the right depth based on implied intent. He has also shown that he can position himself effectively in the zone after falling back and has a practical understanding of space. And finally, To’oTo’o’s explosiveness, length, flexibility and motor skills give him exciting potential as a bomber.

Athletically, To’oTo’o’s hips aren’t the most fluid when he needs to make sudden changes in direction. Sometimes you need to take joint action to slow down and transition. On run defense, To’oTo’o sometimes drops back upfield when facing linemen in space and needs to be more disciplined with his positioning.

Going further, To’oTo’o experiences occasional identification failures. It can be frozen and out of position by deviations. His long speed has a visible limit in long range pursuit and he doesn’t have a great full field range. Also, in the open field, To’oTo’o doesn’t always show the strength to consistently make solo tackles in the open field. He sometimes runs away from ball carriers when he gets involved and can still be more consistent driving through tackles.

At tier 2, linemen can easily redirect To’oTo’o, and he needs to be more consistent with his handwork when fighting blocks. He can also get too carried away by play fakes, and when he needs to dig in after play fakes, he sometimes takes his eyes off the QB. As a result, he can play out of position.

In addition, To’oTo’o can take better advantage of the stems. Sometimes he goes on autopilot in coverage and gives his man too much room. He also freezes on breaks at times and doesn’t have the elite fluidity to make up ground. Overall, his visual discipline, influence and positioning in coverage could improve.

Entering the 2023 NFL Draft cycle, To’oTo’o is one of the best linebackers in the scouting landscape. Like other Alabama LBs before him, he could claim the Round 1 capital. However, I am of the opinion that he is a solid prospect for Day 2. If the draft were today, there is a good chance that top 75. But he has room to improve in some crucial areas and he doesn’t have an elite athletic profile.

To’oTo’o has a lot going for it. It has a traditional LB frame with good length and high level explosiveness. He is also a great processor displaying excellent reaction speed, instincts in congestion, and identification ability. Additionally, To’oTo’o is a high-energy physical defender who is not afraid to impose his will on opponents.

To’oTo’o’s flaws come mainly in the coverage. He has a practical understanding of positioning, but he’s not the most fluid athlete when he has to recover, and he doesn’t always play effectively off the stems. Alabama’s LB has more than enough explosiveness and lateral agility to improve there, but right now, that phase is less consistent.

However, there will always be a market for linebackers like To’oTo’o: explosive defensive leaders and chase defenders who can remove screens, tackle and get around congestion. And at least it has a useful coverage floor, with some load capacity. As a versatile off-the-ball LB in the scheme, To’oTo’o has an early advantage in Day 2 range.

Ian Cummings is a Draft Analyst for Pro Football Network. You can find the writing on it. here and follow him on Twitter: @IC_Draft.