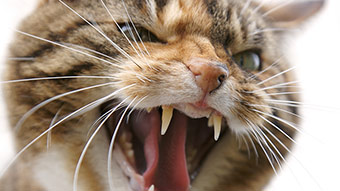 It so happened that a single woman lived on the top floor of an old five-story building. She was left alone in old age. The cat Umka, the cat Dosya and the funny dog ​​of unknown breed, whom she called Zyuze, painted her loneliness.
She gave them all her unspent tenderness, care and love. And they paid her the same. They amused her with their pranks, caressed her when she was sad, treated her when she was not well. In general, they were boundlessly devoted to her. People would like to learn such devotion.

On one of the dark and cold autumn nights, when a woman was asleep, an unlucky burglar entered her apartment. He knew that the woman lived alone, and therefore was not particularly afraid. What can a single woman do to him? But it was not there!
As soon as he entered the hallway, from somewhere on top of his head, the cat, Dosya, jumped with a hiss and began to slap him in the face with its paws. The cat jumped up from the floor with full swing onto his chest and began to tear his shirt with its claws. And the brave Zyuzya grabbed him from the side through the leg. From such a meeting, the hapless thief was completely confused. He did not know what to do: either pull the angry cat off his head, or tear the cat off his shirt. He tried to kick the dog aside, but the dog tore his trouser leg even angrier in response. Unable to withstand such an attack, the thief shouted: “Help!”

See Also:  The Ministry of Internal Affairs of the Russian Federation put on the wanted list Lyubov Sobol

The hostess woke up from the noise. At first, she could not understand what was happening. Isn’t it a fire ?! And when I ran out into the hallway, I did not know what to do: swear or laugh. The picture was very funny. “Save me, granny! – The thief called for help. – Tear these flayers from me! I just made a mistake, I entered the wrong apartment! “

She later told us how difficult it was to free the thief from his defenders. He left the apartment with a scratched face and deep bloody wounds on his arms and legs. Plus, his clothes were in tatters.
The four-legged defenders could not calm down for a long time. And only when the hostess invited them into the kitchen to treat them to sausage, they forgot about what had happened.

Here you can subscribe to the Pensionerskaya Pravda newspaper. I’m writing to you