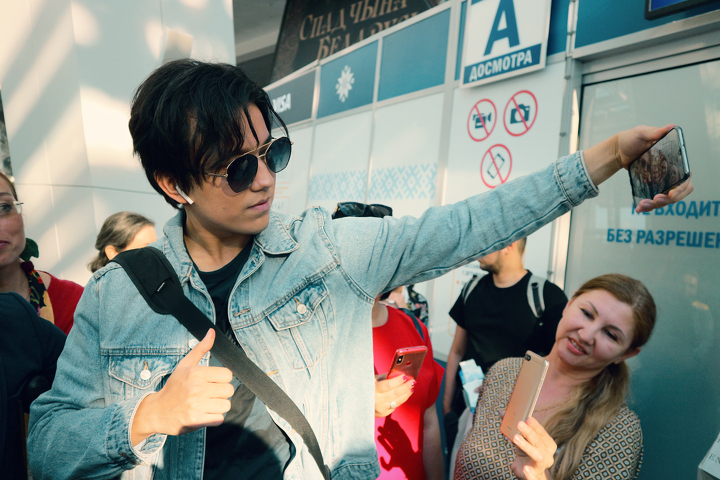 Name Dimasha Kudaibergena Today, without exaggeration, it is known all over the world. For the first time on the pages of Forbes Kazakhstan magazine, he appeared in the ranking in 2017 «20 stars of show business and sports – 2017″. The singer’s rapid career rise was due to his participation in the Chinese singing competition I am a Singer in 2017. On it, the young man won not only second place, but also the love of a multimillion-dollar audience, which allowed him to go on his first D-Dynasty world tour at the end of 2017. In Kazakhstan and the CIS countries, another competition brought popularity to Dimash – the International Festival of Arts “Slavianski Bazaar”, held in Belarus, where the performer was awarded the Grand Prix in 2015.

Today Dimash is an experienced 28-year-old performer whose voice captivates fans from all over the world; musicians and vocal experts regularly review his work, admiring the unique vocal abilities of the Kazakhstani. Most recently, on September 17, Dimash performed the anthem of Kazakhstan before the fight of another modern symbol of our country – a boxer Gennady Golovkin. In social networks, this provoked another wave of admiration. Before it had time to subside, Dimash flew to his homeland, Almaty, to give his first solo concert Stranger. Let’s tell how it was.

The Stranger concert took place on September 23 at the Central Stadium of Almaty. According to the organizers, the event gathered more than 30,000 spectators who came to support the performer from 68 countries around the world. Many concerts in Almaty start late. However, Dimash’s fans turned out to be extremely organized, cultured, and friendly: they began to gather at the stadium two hours before the start. And the concert, scheduled for 20:00, started on time.

See Also:  Stanislav Rybakov held a lesson for teenagers at the military-patriotic club in the Jewish Autonomous Region

The event began with a performance by other young artists. Among them was the Kazakh singer Rukhiya Baidukenova, who won the Grand Prix of the Slavonic Bazaar last year. The stadium was packed to capacity. Those gathered in anticipation of Dimash applauded loudly and shouted his name. After some time, Kudaibergen himself appeared on the scene. However, not quite on the stage – the performer appeared at the very top of a giant LED screen in a red robe, stylized as a costume of a Saka golden man. To the enthusiastic cheers of the crowd, Dimash jumped off the monitor. He was firmly held by the slings, but the spectators were all even and tensely silent. The singer began to sing the first composition while in the air, which, of course, increased the effect of the appearance.

Then Dimash began to speak with the audience in Kazakh and English. He thanked his fans from all over the world for attending his solo concert in Almaty.

The audience saw a modern, large-scale and colorful world-class show. Dimash presented the audience with a concert program filled with the best compositions from his repertoire. Songs already loved by the audience were played, which traditionally the artist’s fans sing throughout the stadium. Also, for the first time at a solo concert, Dimash presented new works – in particular, he performed a song written by his younger brother Abilmansur Kudaibergen. This is a stylish youth song, inspired by the work of the famous French musician FKJ. Abilmansur himself also performed the author’s instrumental composition written by Renat Gaysin. The concert also featured a recently announced composition in Spanish by Dimash, the text of which was written with the assistance of the Embassy of Kazakhstan in Mexico. The audience also heard the most anticipated premiere of this autumn – the author’s composition by Dimash “The Story of One Sky”. The artist was accompanied by his group of musicians.

The concert lasted almost four hours. We saw how grandparents were crying sobbing, not believing that they were seeing Dimash live. Surprisingly, Kudaibergen is not just a performer with the highest vocal abilities. This is a cultural, and maybe a spiritual phenomenon of the country. “His music heals me, I believe in it,” said one of the fans, barely looking away from the stage. If so, then let the artist perform in Kazakhstan more often.