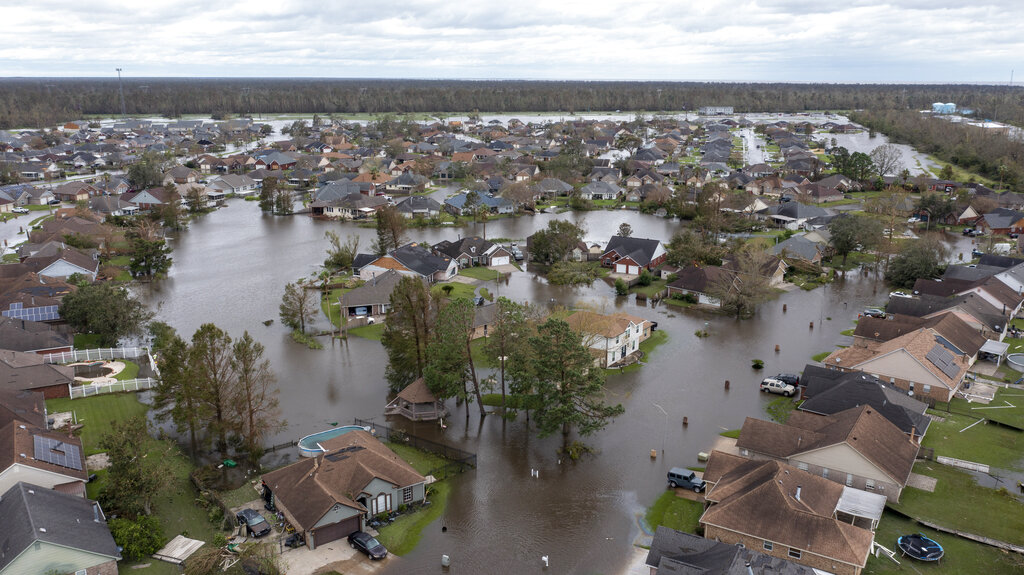 [Voice of Hope August 31, 2021](Comprehensive report by our reporter Zhong Xuan)Since Monday (August 30), communities in Louisiana have begun cleaning up the rubble and repairing the damage caused by Hurricane Ida. Hurricane Ida damaged the power grid in the area, leaving the entire New Orleans and hundreds of thousands of other residents in Louisiana in darkness, not knowing when the power supply will be restored. Some houses and businesses outside of New Orleans have also suffered severe flooding and damage. Under the depressing late summer heat, people have to face the frustrating prospect of no electricity and no water for several weeks.

Louisiana Governor Gov. John Bel Edwards said on Monday: “I cannot tell you when the power supply will be restored. I cannot tell you when all the broken objects will be cleaned up and repaired, but I can tell you. The thing is, we will work hard every day to provide as much assistance as possible.”

The storm killed at least four people in Louisiana and Mississippi, including on Monday night, seven cars crashed into a 20-foot-deep (6-meter-deep) hole near Lucerdale, Mississippi. Two of them were in After the heavy rain, the road collapsed and was killed.

On Monday, rescuers took boats, helicopters, and elevated trucks to bring more than 670 people besieged by floods in Louisiana to safety. In Mississippi, another 20 people were rescued. Rescuers plan to conduct door-to-door rescues in the hardest-hit areas to ensure that everyone can leave safely.

New Orleans Airport has cancelled all commercial flights in and out for the third consecutive day. Many tourists are still stranded in airports without water and electricity, which means there is no air conditioning or toilets.

The governor of Louisiana said that power personnel are rushing to the area. There are 25,000 utility workers in the state who are helping restore electricity locally, and many more are coming.

However, his office described the damage to the grid as “catastrophic.” Electricity officials say it may take several weeks to restore power in some places. Inida rushed through Louisiana and Mississippi at a wind speed of 150 miles (240 kilometers) per hour last Sunday (August 29), shutting out more than 1 million homes and businesses. This wind speed made Aida the fifth largest hurricane ever to hit the United States.

A key transmission line that transported electricity from the Mississippi River to the giant iron tower in the New Orleans area was twisted and collapsed during the storm. The power company said more than 2,000 miles of transmission lines and 216 substations were cut off. The storm also razed telephone poles, crushed trees on the wires, and caused many transformers to explode.

New Orleans city officials told residents without electricity that there was no reason to stay at home for at least a few days.

However, there are still residents staying at home, and Hank Fanberg said that two of his neighbors provided him with generators. He also has a food plan: “I have a gas grill and charcoal grill.”

Some places are also facing the problem of shortage of drinking water. Federal officials said that in 17 administrative regions, about 441,000 people have no water service, and another 319,000 people are in a “boiling water warning state” with contaminated drinking water.

At this time 16 years ago, Hurricane Katrina broke through a dam in New Orleans in 2005, destroying the city and killing 1,800 people.

New Orleans underwent major repairs to its dam after Hurricane Katrina, so this time, it avoided the catastrophic flood that some people feared.

In the southwest corner of Mississippi, the entire community was surrounded by floods and many roads were impassable. According to reports, there were also several tornadoes, including a suspected tornado in Saraland, Alabama, which tore off part of the roof of a motel and turned over an 18-wheel truck, injuring the driver.

Ada continues to bring heavy rain and flooding to parts of Tennessee and Ohio. There may be flash floods and mudslides around Washington on Thursday (September 2) and in New England on Friday (September 3).