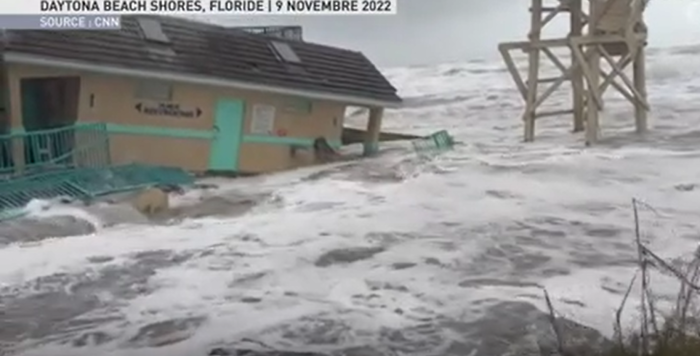 Before even making landfall on the east coast of Florida, Hurricane Nicole had begun to roar late Wednesday afternoon. In Port Orange, south of Daytona Beach, homes have completely lost their backyards, which have collapsed due to wind and high waves. Some houses had terraces of a hundred square meters, and today find themselves with their back door directly on the ocean.

An office by the sea!

In the same area, in Dunlawton, a building began to collapse and a boat launch was destroyed. This was the building housing nautical safety equipment. The entire building will probably have to be demolished and rebuilt, a little further from the water.

The lure of the ocean

Of Florida’s 22 million people, 16 million, or nearly 75%, live along the Atlantic or Gulf of Mexico coasts. These are the regions most sensitive to the effects of storms. And if we remove the Orlando region, where the Universal and Disney amusement parks are located, almost 85% of the Florida population lives a few kilometers from the coast.

SEE ALSO: Tropical storms: we are heading for a record November.