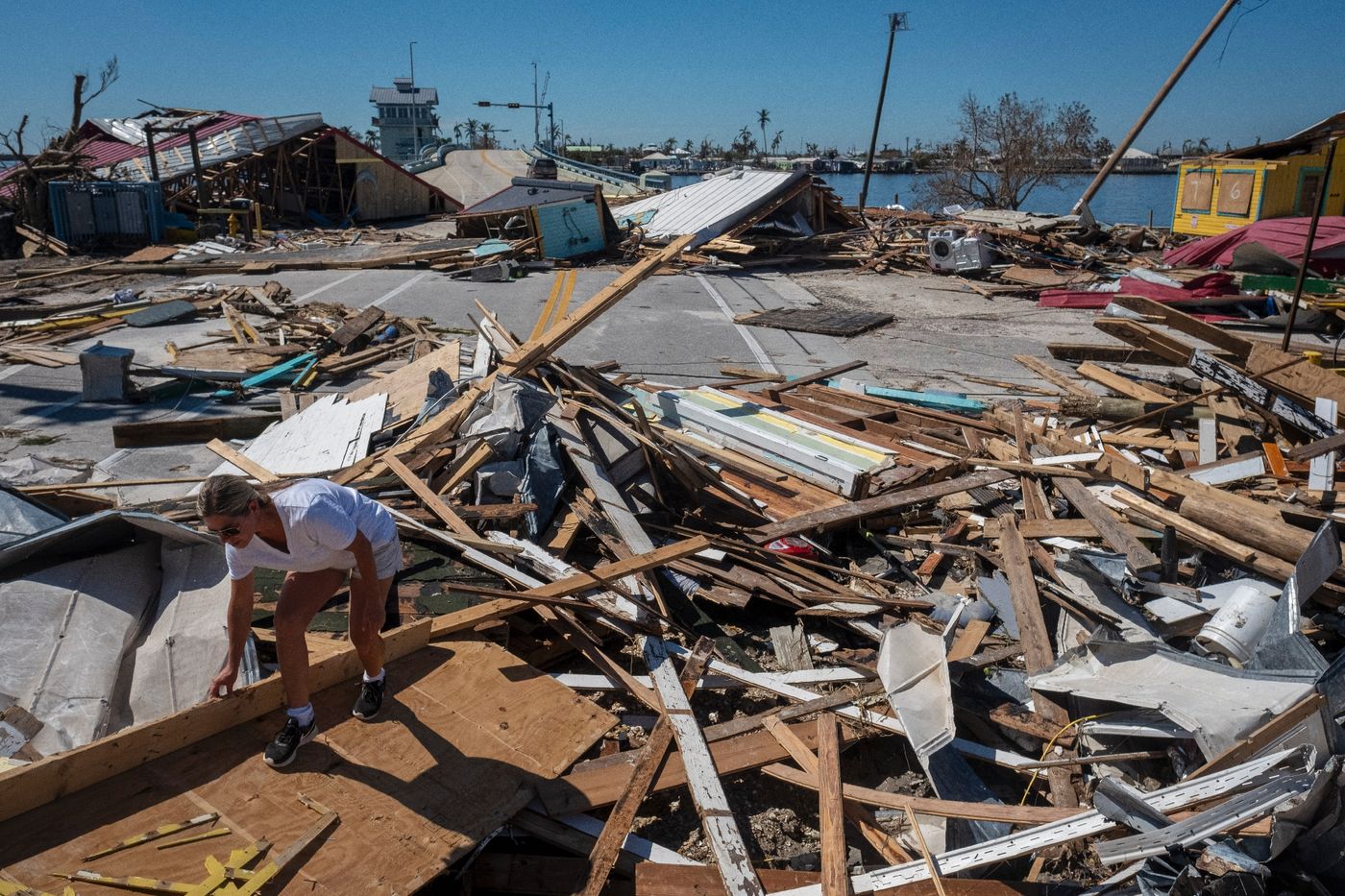 Karen Pagliaro walks the main street of Matlacha, weaving, a little lost, between downed trees, debris and abandoned vehicles. This island of 800 people, usually a little piece of paradise, was cut off from the world after Hurricane Ian, which damaged the two bridges connecting it to the rest of Florida.

“We feel a little forgotten”, regrets this 50-year-old teacher, who lost her house in the storm. “We thought they (the authorities) were going to send aid, water, supplies and other things, but they told us no, and that we had to leave,” she adds.

Until Wednesday, Matlacha was a little gem in southwest Florida, a fishing village with colorful wooden houses built around a wide street, where you can enjoy the sea, the blue sky, the restaurants seafood and small art galleries.

The hurricane, which killed at least 44 people in Florida according to the latest official report, changed everything.

A devastated road in the small town of Matlacha, Florida, on October 1, 2022, after Hurricane Ian / AFP

Three days after its passage, the coastguards, firefighters and residents of neighboring towns go there by boat to rescue the last residents who were stuck after refusing to evacuate before the storm.

Other inhabitants who had left the island made the trip in the opposite direction to see the damage.

He has no intention of leaving. “I prefer to stay here rather than go elsewhere and be on the street. Here, at least, we have a small roof, we will try to repair the caravan where we live”, explains the young man. 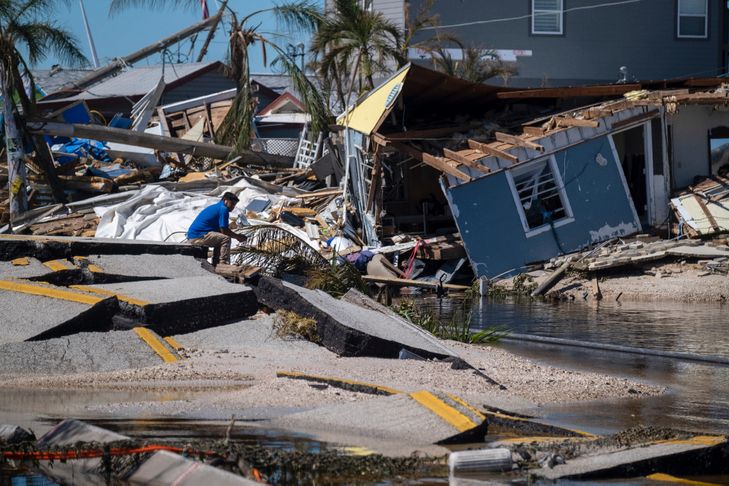 A man sits on a devastated road in the small town of Matlacha, Florida, on October 1, 2022, after Hurricane Ian / AFP

At the other end of Matlacha, the main street is cut by a huge crack that locals cross on a makeshift bridge made from a metal plank.

Here and there, dozens of people walk wearily, looking elsewhere. Most share the same uncertainty: they don’t know where to go.

“I don’t have a plan,” said John Lynch, resigned. The 59-year-old man’s house is sinking into the sea and he is preparing to leave. 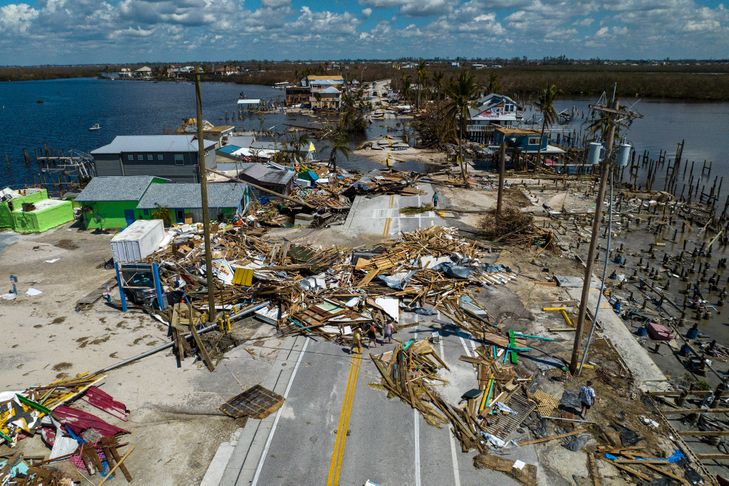 An aerial view of a road cut, October 1, 2022, in the small town of Matlacha, Florida, after the passage of Hurricane Ian / AFP

“We have been here for 25 years (…) It is heartbreaking because this is where we planned to live the rest of our lives,” he sighs.

Karen Pagliaro also doesn’t know what she’s going to do from now on. She has nowhere to go and the school where she works had to temporarily close due to hurricane damage. What is clear to her is that she wants to live in Matlacha.

“It’s our city, we cherish it and we love being here,” she said. 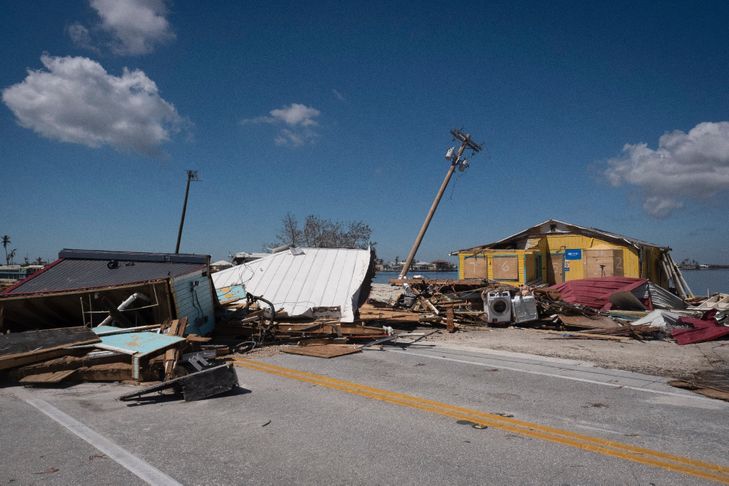 Homes and businesses destroyed in the locality of Matlacha, Florida, October 1, 2022 / AFP

Near the pier, Jim Bedra is about to leave with his wife, Kathy, and their dog, Luna, on a coastguard boat. Last week, this septuagenarian wanted to evacuate the island with Kathy and their 31-year-old son, but the latter convinced him to stay where they had lived since 2013. Now he no longer has a home and his voice breaks when discussing this situation.

See Also:  how the RTL correspondent was saved in extremis by a policeman

“We’re going to stay in a shelter, I guess. It’s not the retirement we were looking for,” he explains, adding that he wants to return to his home state of Ohio, in the northern United States.

Before boarding the boat that will take him to the mainland, Jim adds: “I never want to come back here.”