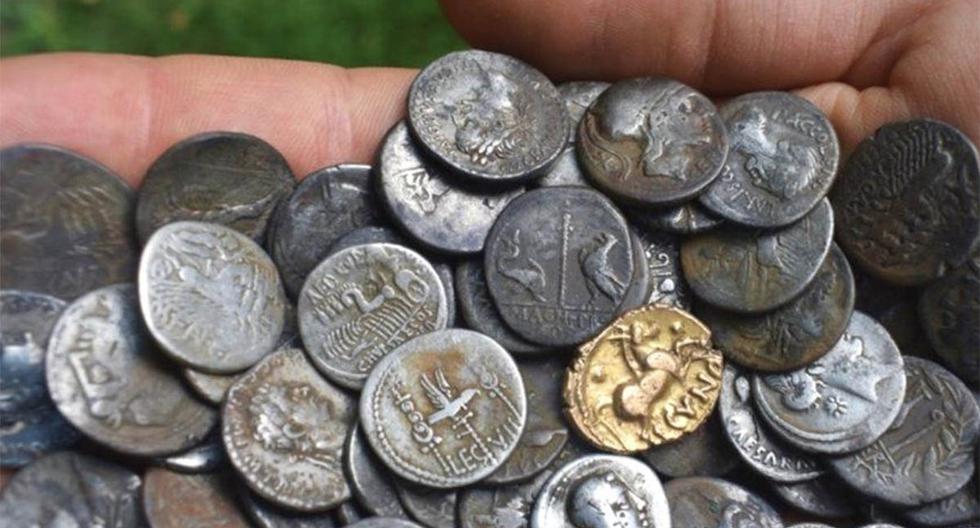 George Ridway is a young man who lives in Suffolk County in United Kingdom and unearthed a Roman treasure valued at nearly $80,000. The young man, a big fan of Indiana Jones, told the BBC that he had “achieved one of his childhood dreams” by finding a treasure.

The young man resides in the village of Ashbocking and found the treasure in a field very close to his home, after satellite images showed a “interesting crop brand”. After that, he used his metal detector and found two Roman brooches. So she continued her search and the detector gave a strong reading that meant silver was found.

“I dug up and there was a Julius Caesar silver denarius, which is amazing because you think about how iconic that is, and that coin was from 4-47 BC. That coin in itself would have been the find of a lifetime, just that one, but I kept looking, and a few yards away, I found another silver denarius, and then another.”George recounted. In a few hours he managed to find about 180 denarii.

George Ridway is 31 years old and not only found silver denarii from the time of Julius Caesarbut also Iron Age coins and some pottery shards. “It really was amazing because I actually grew up next to a Roman road, I’ve always been passionate about Roman history”, he added. “Finding a coin was unbelievable and then I only had handfuls of silver deniers,” said the young Indiana jones fan.

“I have achieved my childhood dream. I have found a Roman treasure. It was incredible: the adrenaline ran through my body”George said during the interview. He admitted that one of the biggest influences on him is Indiana Jones. Also, he has a pet named ‘Indy’ and almost always wears the hat and whip like the fictional archeology professor had.

For three more months after the find, George and his family roamed the area and tried to discover everything they could. In early May, the treasure he found was provisionally valued at around $80,000 (£65,000).

It was learned that all the money raised will be divided between George Ridway and the owner of the land who preferred not to reveal his name.

Who is Indiana Jones?

Indiana Jones is an archaeologist and adventurer, the protagonist of the franchise of the same name produced by Steven Spielberg and George Lucas. The son of medieval literature professor Henry Jones Sr. and his wife Anna, he was born on July 1, 1899, in Princeton, New Jersey. During his childhood, he accompanied his father on her travels through Europe, where he learned to speak, read and write 27 languages ​​including French, German, Italian, Spanish and Chinese, in addition to English. Henry Jones Jr. adopted the name of his beloved dog Indiana for himself, insisting that he be called Indiana Jones.

What is the latest Indiana Jones movie?

According to the Spanish edition of the portal IGN, Indiana Jones 5 was first announced in 2016 with a release date of July 19, 2019, but has suffered many delays and is now scheduled to hit theaters on June 30, 2023.