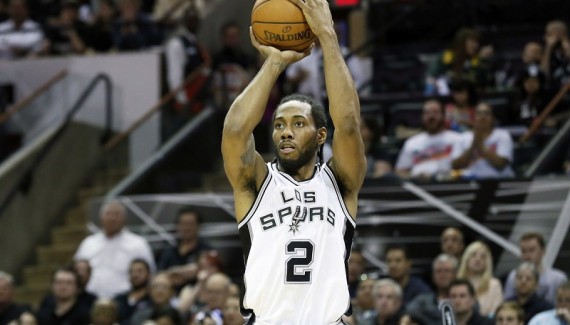 After a narrow win over the Clippers, the Spurs resumed their destruction business against the Pacers. However, it took until the end of the third quarter to see San Antonio gain the upper hand over their opponent. But the Spurs won 106-92 and recorded their sixth victory in a row.

Kawhi Leonard (24 points, 6 rebounds, 5 assists and 3 steals) outclassed Paul George (7 points to 1 of 14 on shots and 6 stray balls). The French were at the party with an excellent Boris Diaw (14 points and 8 rebounds), a finisher Tony Parker (15 points including 9 in the last quarter) and an Ian Mahinmi who fails one point from the double double (9 points and 11 rebounds).

The game starts slowly. We must wait for the entry of the second five of the Spurs to see the first gap. On a bright passage from Boris Diaw, San Antonio takes an 8-point lead (22-14). If the substitutes restore movement to the Texan attack, their defense leaves something to be desired. A Monta Ellis buzzer shot keeps Indiana in the wheel of the 2014 champions (23-21).

While the rhythm of the first quarter favors the Spurs, Indiana releases its small ball to raise the tempo of the meeting. Gregg Popovich finds in the pair Boris Diaw – David West a perfect parade. Indiana is instructed not to take two and the two friends are having a field day at the low post with 13 points to 6 of 7 on shots (40-30).

As at the start of the match, the Texans holders are struggling to maintain the intensity. The Pacers, through Rodney Stuckey, take the opportunity to attack the old opposing canes. They even go back in front two minutes before half-time despite nine lost balls. Kawhi Leonard then goes up a gear and restores the advantage to his team while limiting Paul George to 1 out of 7 on shots and 3 lost balls (50-48).

The boss is Kawhi

San Antonio’s defensive problems continue when they return from the locker room, but this time it’s under the circle that the shoe pinches. Offensive rebound after offensive rebound, the Pacers stay in the game. Lavoy Allen, holder tonight, and Ian Mahinmi giving LaMarcus Aldridge a hard time, the Spurs collective turns once again to Kawhi Leonard.

The winger scored 11 points in the quarter and San Antonio regained a nine-point lead (79-70) as the trend continued at the start of the last quarter. The best defense in the league is back. Boris Diaw aka “The Big Croissant” then Tony Parker then extinguished Indiana’s last hopes (104-86).

This is the fifth straight away defeat for Frank Vogel’s men. The Pacers have received good contributions from their role players but cannot hope to win away from their bases without a Paul George at the top of his game. Tonight he came up against the newest player of the week in the West. It’s hard to know what was most impressive about Kawhi Leonard. Is it the total annihilation of George or the demonstration, now regular, of his new offensive arsenal? Like his team this season, and his elders in the past, he continues to produce very high level performances in a relative anonymity which suits him perfectly.