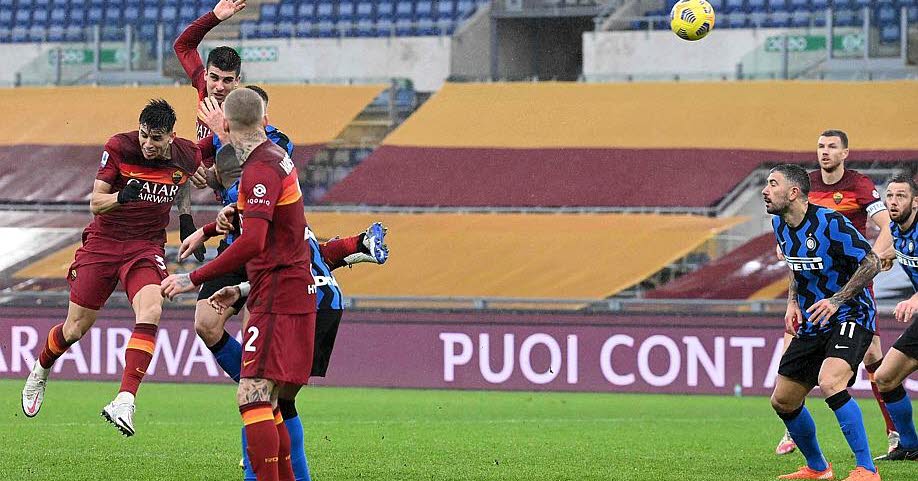 Inter Milan, joined at the end of the match by AS Roma (2-2) on Sunday at the Olimpico stadium, let slip two more points after their defeat this week against Sampdoria, falling to three points behind leaders AC Milan .

The Nerazzurri, led at the break after a counter concluded victoriously by Lorenzo Pellegrini (17th), thought they had done the most difficult after having equalized and then taken the advantage at the start of the second half thanks to Milan Skriniar from a corner (56th) and Achraf Hakimi a marvelous strike under the bar (63rd).

But this decidedly fragile Inter could not resist the Roman pressure of the last quarter of an hour. Samir Handanovic was decisive on a tense shot from Bryan Cristante (83rd) then ahead of Gianluca Mancini (85th). But the Milan goalkeeper could not get over the head of the same Mancini (86th).

A new disappointment for the Interiorists before receiving Juventus Turin, nine-time defending champion in which Antonio Conte dreams of taking the crown.

With this draw, Roma preserve their third place six points behind AC Milan. And confirms the potential of a solid and attractive team at times, especially in the first period, endowed with a nice character at the end of the match, but also victim of air holes, especially against the bigger cars.

In the other meetings of the afternoon, Napoli and Lazio took advantage of this marking to make up part of their delay.

Simone Inzaghi’s players did not tremble on the lawn of a Parma team in great difficulty (0-2).

The Neapolitans had more difficulties to overcome the defense of Udinese (1-2). French midfielder Tiémoué Bakayoko, on loan from Chelsea, delivered Gennaro Gattuso’s men at the very end of the game.

Finally, Hellas Verona confirmed their place in the first half of the table (9th) against the red lantern Crotone (2-1).

FA Cup: Leeds humiliated by a D4 club in the third round

Marcelo Bielsa’s Leeds were humiliated by Crawley Town (3-0), a club in the English fourth division, on Sunday in the third round of the FA Cup.

The small team from Sussex, south of London, made the difference after the break, scoring in quick succession by Nick Tsaroulla (50th) and Ashley Nadesan (53rd), before Jordan Tunnicliffe (70th) sealed a tenth victory of straight for Crawley, whose coach even had the luxury of getting reality star Mark Wright into stoppage time.