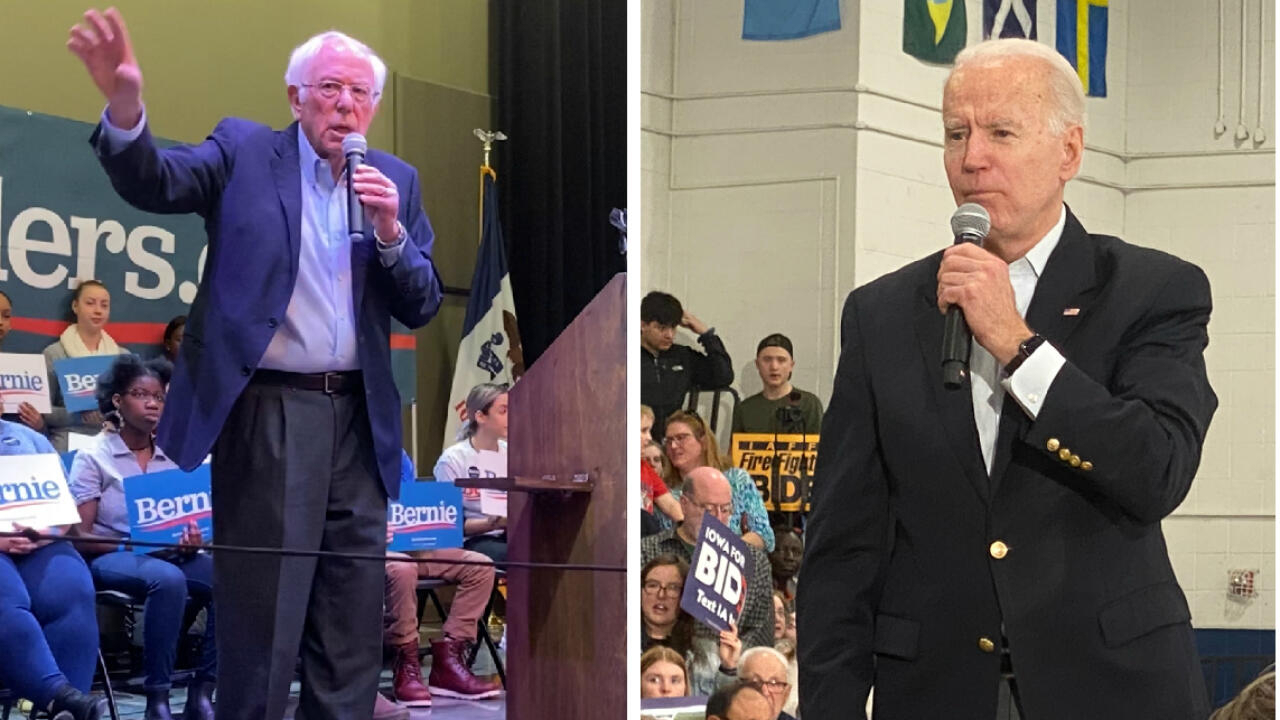 Both favorites for the elections in Iowa, the socialist Bernie Sanders and the moderate Joe Biden are presented as the figures most capable of defeating Donald Trump during the US presidential elections in November 2020. One bases his campaign on his ideas, the other on your personality. Reportage.

It is 6:00 pm on Sunday, February 2, in a deserted neighborhood in downtown Des Moines, Iowa. In a discreet location, about 30 volunteers work. A small group of people with glasses type, heads bowed, on the computers. Further afield, a young woman explains to motivated volunteers the golden rules for door-to-door work.

“What we are doing here, she says, is changing the course of American history.” Nothing more and nothing less. They are all in their 20s and modern in appearance. His candidate for the Democratic caucus on Monday night is Bernie Sanders, the idol of young Americans.

Here in Iowa, the first state to vote, the Vermont senator is running alongside the moderate Joe Biden. However, Biden is the national favorite. His victory on Monday, February 3, would represent a huge success to head in the right direction. The candidate has been stuck for several days in Washington because of the impeachment process against Donald Trump. He spearheads his campaign on weekends, paving the way to talk about his “political revolution” to a growing audience. But above all, Biden can count on a strong network to back him up.

Bernie Sanders is used to big crowds but here in Iowa he also has more intimate meetings with only a few hundred people. In this state which votes Monday, he is neck and neck in the polls with Joe Biden. pic.twitter.com/bXTFNymbOV


On the walls of the Des Moines store, posters recall the key themes of the socialist’s campaign: “Cancellation of student debt,” “Minimum wage of $ 15” and even “Health is a human right.” Cydney Macmillan, 35, works on the campaign. He has been a volunteer for a month and a half. He had already voted for Bernie Sanders four years ago. This time he realized that the Democratic field is increasingly progressive, particularly with the candidacies of Elizabeth Warren and Andrew Yang. “I think Bernie is the cause of that and I think it’s a good thing,” says Macmillan.

Bernie and his “move”

Macmillan is convinced that enthusiasm for his candidate has never been greater. “Look around you. There are people who have come to help us from New York, California, Texas! Buses full of people arrive! Bernie summons young people, but also older people, minorities … He has a movement that others do not have. ” According to Cydney Macmillan, Sanders could even appeal to those disappointed in Donald Trump thanks to his ‘anti-establishment’ letter.

Cidney is a volunteer for the Bernie Campaign #Sanders. He finds that there is more competition this year in the progressive camp of the Democratic Party (Elizabeth Warren in particular). But for him what matters is that his candidate has paved the way for others. #IowaCaucus pic.twitter.com/8Cjh7vioKL


Three meters from him, another volunteer returns from a door-to-door operation. Simon Golovcsinko, 26, describes to his teammates his formula for speaking to the Trumpists. “If they say to me: ‘You knocked on the wrong door’, I answer them with a joke: ‘Are you an intolerant person?

Convincing the opposing side to win next November is also Joe Biden’s goal. If Bernie Sanders believes he can attract the disappointed in the “system”, the former vice president plays the card of moderation and unity.

“They criticize me because I say I want to unite the country. But democracy is about consensus,” he told the crowd on Sunday, February 2, in Des Moines. Listening to him, he would almost sound like the Democrats’ favorite candidate. But he has hardly spoken about his program or his rivals. He has limited himself to remembering the worst scandals of the current president and to confront them with his own “moral code.”

In the audience, it is impossible not to notice a certain lack of enthusiasm amid the applause, compared to the extremely mobilized Bernie Sanders supporters. Perhaps it is something related to the average age, much higher among those who support Biden than the socialist. In the room you can see the presence of some onlookers with banners of Pete Buttigieg, another competitor from the moderate field.

However, this does not prevent many Joe Biden supporters from being certain of his decision: “The main reason for my support, apart from his experience, is that we are currently too divided and we must resolve this racial divide, says James A. Benzoni, an immigration lawyer questioned at the end of the meeting. The election of Barack Obama rekindled racist prejudices and today Biden is the only one capable of reconciling both sides. “

Still, the septuagenarian candidate hesitates – he was the only one to have read his notes on the stand – and sometimes seems tired. But it must be recognized that he has a very personal and warm way of interacting with the public. When expressing himself, he takes the time to look each of the viewers in the eye. “Uncle Joe” does not sell a simple program but also a personality capable of comforting a wounded country. “He has a big heart, he’s a very good man,” said Tom Small, another Biden supporter. “He has experience and wisdom,” he adds. “And pity!” Insists his wife, Linda.

Bloomberg is ready to take advantage

Monday night’s election will be a test for Joe Biden. The favorite at the national level, can afford to lose this State as it is leading in those that contribute more representatives. But the Democratic elections are also played on a moral level. If Bernie Sanders can mobilize his supporters en masse and win in Iowa and then New Hampshire the following week – where he is a favorite – he will have considerable momentum.

In which case, billionaire Michael Bloomberg is ready. He did not campaign in Iowa or New Hampshire but focuses on states with many representatives like California or Texas.

He is betting on Biden’s great fragility and on an anti-Bernie front within the Democratic establishment. Bloomberg could then appear like the centrist savior capable of overspending against the other billionaire he wants to evict from the White House: Donald Trump.