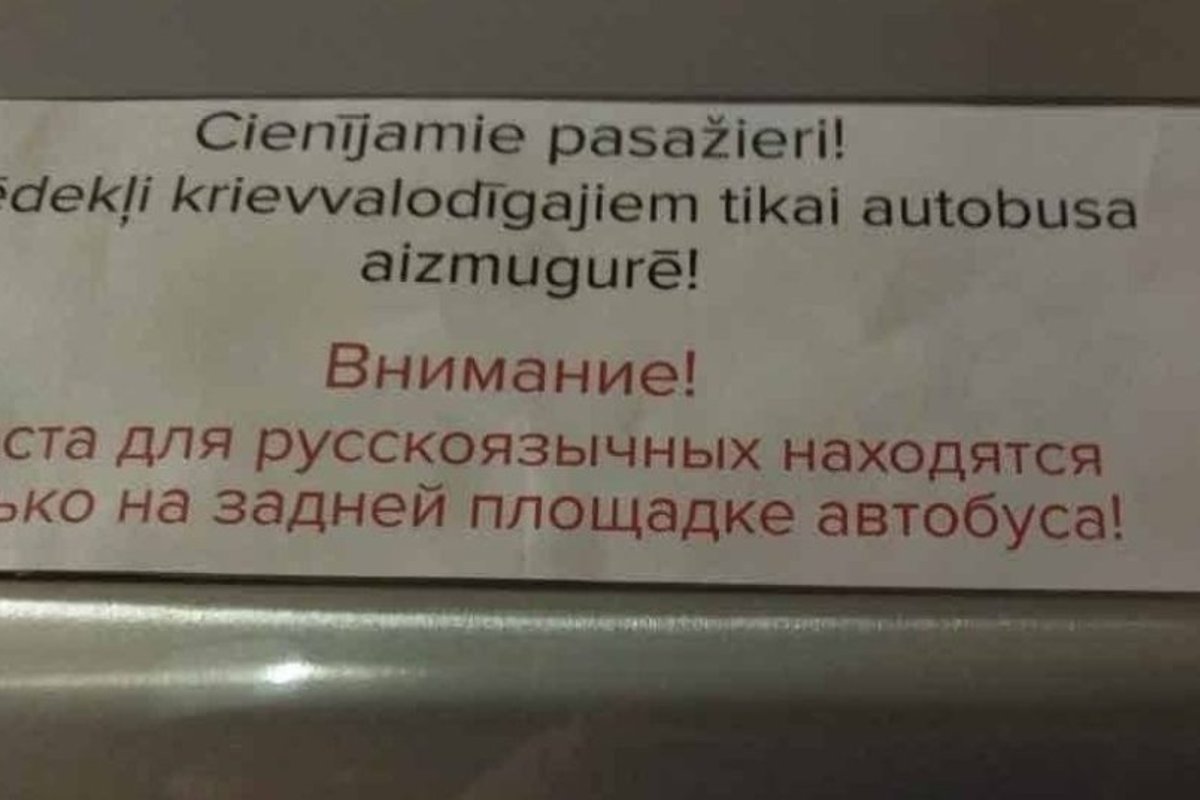 Starting from September 17, a picture of a “Russophobic” sign in a Riga bus began to appear on social networks: “In contact with», Facebook and LiveJournal. They also posted it in large Telegram channels, including „Ax Live» (2.9 million subscribers at the time of writing this review) and „Live» (2.5 million), as well as in a note on the website of the TV channel „Ren-TV». On Twitter about the sign told Lenta.ru and dozens ordinary users.

The fact that Andrey Yudin, a member of the Latvian parliament, called for an audit to determine whether such signs were placed or not, was reported by many Russian media: RIA “Novosti”, RBC„Gazeta.ru“, TV channel”Star», Kingdom and Ura.ru.

commented the situation and the head of the State Duma Committee on International Affairs, leader of the Liberal Democratic Party Leonid Slutsky: “Fake or not fake – even the deputies of the Latvian Seimas began to find out. I wish them to get to the bottom of the truth with all the ensuing legal consequences.” Nevertheless, Slutsky accused the Latvian authorities of a “cave Russophobia policy” and “ordinary fascism” (note that Andrey Yudin is a deputy from part of the ruling coalition party “New Unity”).

The idea of ​​the plate from the viral photo clearly refers to racial segregation, which was provided for by law – in particular, the city of Montgomery in the US state of Alabama. Until the mid-1950s, the front of the buses that ran there were reserved for white passengers, and the rear for blacks, while the latter had to give way if the “privileged” seats ended. Montgomery rose to prominence in 1955 when local black seamstress Rosa Parks refused to leave her seat and was sent to prison for doing so.

Although she was not the first to do so, it was the case of Rosa Parks that gave rise to a massive boycott of the city transportand on the black side, which lasted over a year and led to the U.S. Supreme Court declaring segregation laws unconstitutional. The protest in Montgomery is considered one of the key in the history of the struggle for civil rights in the United States, as well as a fundamental stage in the career of Martin Luther King.

Let’s get back to the viral image. To the right of the “Russophobic” sign is an image of a yellow card with a blue letter e. These are e-talons, one of the main types travel documents, which can only be used on routes operated by the municipal company Rīgas satiksme. There are no other details in the picture that allow us to claim that it was taken in Riga and on the bus (or any other public transport).

We managed to find only two photographs of a sign supposedly determining the places of Russian-speakers in transport, and one of them is just a slightly cropped version of the other. The Internet users who reported discrimination did not share any other similar images, which could indicate the mass nature of such a campaign. On the contrary, only one image of an object is a characteristic feature of information that does not correspond to reality. The “heroes” of such analyzes of “Checked” have recently become posters about I was reporting in Switzerland, collecting books for burning in Germany and accusations of Ukrainians in the energy crisis in the UK.

Latvian Twitter users who actively discussed the photo emphasizethat the author of the inscription made inaccuracies in the Latvian version of the phrase. For example, he used the word sēdekļi, while places in public transport would be correctly called sēdvietas. Exactly arrives and Rīgas satiksme, which operates public transport in the Latvian capital. The word sēdekļi, as colleagues from the Latvian publication Delfi explained to us, can be used in the meaning of “car seat” (including a removable child seat) or “when it comes to one seat on a bus – for example,“ the seat is dirty “”, but in the plural number, it is more correct to use the word sēdvietas.

Monday, September 19, Rigas satiksme wrote on Twitter that the information about the installation of signs for Russian-speaking people in Riga public transport is not true. “Already on Saturday evening, our employees checked all vehicles entering the park and depot,” the company noted, emphasizing that such signs were not found in any bus, tram or trolleybus.

This information, the representative of the carrier confirmed and our colleagues from the Re:Baltica project. Edition Delfi in Rigas satiksme declaredthat “there is no place on buses where such an announcement could be placed in such a way that the e-talons symbol is located next to it.” The company also emphasized that all information materials in public transport indicate its logo, which is absent from the image being checked.

Moreover, we asked our colleagues living in Riga to take pictures of what the signs look like in Riga’s public transport. Considering that all buses, trolleybuses and trams in the Latvian capital are owned by the same company, ads should use the same design style. Judging by the photographs, Rīgas satiksme does not use Russian at all in printed materials placed on transport. The only exception is that local trams are equipped with ticket vending machines, where information is duplicated in Latvian, Russian and English.

Then, on September 19, the Latvian police stated news agency LETA, which is investigating the incident.

Based on the totality of data available today, it can be stated with an extremely high degree of certainty that there are no grounds to talk about any formally established segregation based on the principle of language in Riga public transport. The only evidence that was used in the news about this alleged innovation was one (!) photograph of a plate with a grammatical error in Latvian, which did not match the design code of the local carrier. The Rīgas satiksme company also claims that it checked all the vehicles operating on the day this picture appeared on the Web, and did not even find homemade leaflets stating that Russian-speaking passengers are required to be in the back of the cabin.

We thank the journalists of the Russian-language edition of the Delfi.lv portal for their help in preparing this analysis.