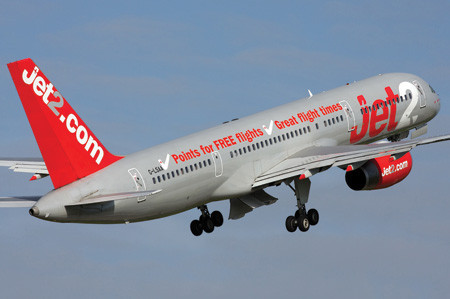 The airline company Jet2.com has inaugurated this Wednesday a route between Almeria and the British city of Bristol. In this way, throughout this summer season it will have connections with four destinations in the United Kingdom: Bristol, Birmingham, Leeds and Manchester.

The passengers of the first flight of the morning to Bristol have been received in the Almeria Airport with a commemorative cake five years of Jet2 operations at this airfield.

In order to meet the anticipated demand for these flights to the United Kingdom, the airline has offered nearly 63,700 seats (includes departures and arrivals).

That figure represents practically a quarter of all the places that have been programmed at the airport to cover the routes with that country, which add up to more than 270,000. Its about market with the largest provision of seats for the summer season (39% of the total), followed by the national market.

Jet2.com has been operating at Almería Airport for five years now.

Jet2 has moved more than 150,000 passengers during its first five years at Almería Airport. Since it was implemented in the spring of 2017, its activity has contributed “very significantly to the growth and consolidation of the airport’s connectivity with British destinations”, as indicated by Aena.

-Jet2.com: its offer of seats to Spain this summer, the largest in 20 years

See Also:  Covid, because some healed do not develop antibodies