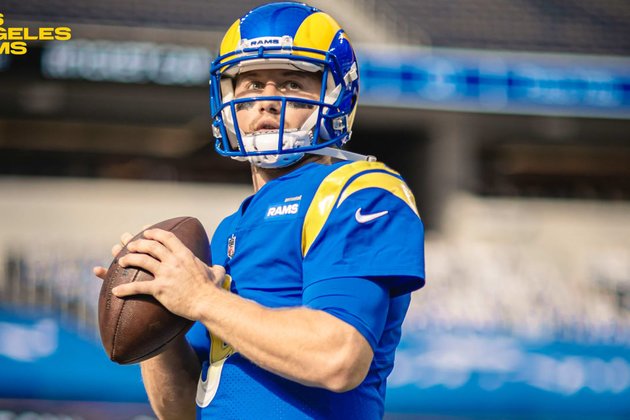 We can say that the playoffs start this Sunday for the Rams, who after wasting two chances to secure their place in the postseason are trying again when they host the Arizona Cardinals at SoFi Stadium (1:25 pm / CBS).

All eyes will be on John Wolford, the Rams backup quarterback who will be making his NFL debut. Despite Wolford’s inexperience, coach Sean McVay and the team’s players have expressed a lot of confidence in the man who throughout the bell has trained every day against the Ram team’s defense.

According to ESPN, Wolford will be the first quarterback in the Super Bowl era to make his debut in a ticket game to the playoffs. Every play made by the dynamic 6-1 (1.85 m) foot 200 pound (91 kg) athlete will be worthy of analysis.

All Los Angeles (9-6) needs to return to the playoffs after missing the previous bell is win or tie the game. Arizona (8-7) needs to win to stay alive. If the Rams lose, then they will need the Green Bay Packers to defeat the Bears (8-7) in a simultaneous game in Chicago.

In addition to coming with two losses in a row, the Rams face their game this Sunday with the highest degree of adversity in terms of absent players.

Jared Goff, who had surgery on his right thumb, leads the disabled list, but Sean McVay will also have to draw on his roster to be able to replace Darrell Henderson and possibly also to Cam Akers, both runners with ankle injuries. Henderson, the team’s leader in rushing yards, was placed on injured reserve this week, while Akers, who did not play in Week 16, is listed as “questionable” and his participation will be decided a few hours before the kickoff.

Also, the linebacker Leonard Floyd, who is second on the team with 9.5 sacks, is as “questionable” due to an abdominal discomfort that even led to him being taken to a hospital preventively on Friday. And the inner linebacker Micah Kiser, who was activated during the week after missing five weeks, will not be ready to reappear due to a knee injury.

On the other hand, the Rams will not have their receiving leader, Cooper Coup, nor with the defensive lineman Michael Brockers, as both were placed on the COVID list. Kupp has 92 receptions for 974 yards. Brockers has had 51 tackles and 5 sacks. It’s the first time the Rams will have starting players absent for being on the list.

The Cardinals, for their part, will have their quarterback Kyler Murray, who last Sunday injured his leg and started the week in doubt to play. The desert team listed five players as “questionable”: the running back Chase Edmonds (hip), the legendary catcher Larry Fitzgerald (groin), the stellar safety Budda Baker (neck) and closed wings Darrell Daniels (hamstring) and Maxx Williams (ankle).

Edmonds’ participation – 451 rushing yards and 51 receptions, including 4 for a touchdown – and Fitzgerald will be decided before the game starts.

“The most important thing is that I can’t make critical mistakes, I have to put the team in a position to win, we have a good defense … Every play is a challenge in the NFL and it’s about making the best decision and getting into position of win”

– With John Wolford behind the center, the Rams are going to need to run well the ball. Not that John Wolford can’t pitch, but the game plan is expected to include a healthy dose of runs and not too many passes. In fact, what characterizes the 25-year-old Dallas quarterback is his ability to move, extend plays and, if the opportunity presents itself, go out on a run with the determination that has earned him the appreciation of his teammates. Running is a crucial part of your arsenal. In the absence of Henderson and perhaps Akers, Malcolm Brown will be another key player of the game and the same the offensive line, that did not play very well the past two weeks.

– Sean McVay can try to mimic what the 49ers did last week to beat Arizona 20-12 despite starting with their third quarterback. CJ Beathard lanzo only 22 pases of which he completed 13 for 182 yards, but three of those were touchdowns. San Francisco’s offense was all about run and run, especially with Jeff Wilson, who had 183 yards of his team’s 227 on the ground. Arizona’s defense against the run is not particularly good: it allows an average of 126 yards per game to move to 23rd in the league and 26th in yards per attempt (4.7). By comparison, LA allows an average of 94 yards per game and 3.8 per attempt.

– Another very important key will be that Jalen Ramsey once again controlled receiver DeAndre Hopkins, who is 2nd. in the entire NFL with 111 receptions and 3rd. with 1,372 yards. Ramsey pretty much erased it in the game on Dec. 6, when Hopkins started to feature until the second half when he was able to shake off a bit of the Rams’ star corner, finishing with 8 catches for just 52 yards and 1 TD. His longest play was 10 yards. This will be one of the biggest games of Ramsey’s career.

– Due to the absences and the defensive strength of Los Angeles it is possible that the game will be of few points, so the performance of the kickers will be another key. On the Rams’ side, Matt Gay has settled in by hitting 11 of 13 field goal attempts and his 15 extra point kicks. Arizona’s kicker is 16-season super veteran Mike Nugent, who came to the team a few weeks ago and is 7 of 7 in field goals and 6 of 6 in extra points.

The games this December in which the Rams defense allowed 300 yards to the opposition, after leaving Arizona at 232, New England 220, NY Jets 289 and Seattle 292.

The Rams (9-6) face three possible scenarios for the playoffs Should They Get Their Ranking: If they beat Arizona and combined with a Tampa Bay loss (10-5), they’ll be in the playoffs as the No. 5 seed or first wild card of the conference. If the Rams win but the Buccaneers do the same in their game against Atlanta, LA will be No. 6 in the NFC. And if they lose, but Chicago also loses in their game, the Rams will be the No. 7 seed. Naturally there is another possible scenario, which would be the elimination if they lose to Arizona and the Bears defeat Green Bay.

One of the main stories surrounding the game is the absolute dominance that the Rams have exercised over the Cardinals since the 2017 season, a period in which these teams have played seven games and there have only been wins for Sean McVay’s squad. That streak includes the victory of 38-28 of this December 6 when LA doubled Arizona in total net yards (463-232). In those seven meetings the Rams scored a combined 233 points to just 84 for the Cardinals. And thanks to that streak the historical series favors the Rams 44-38-2.