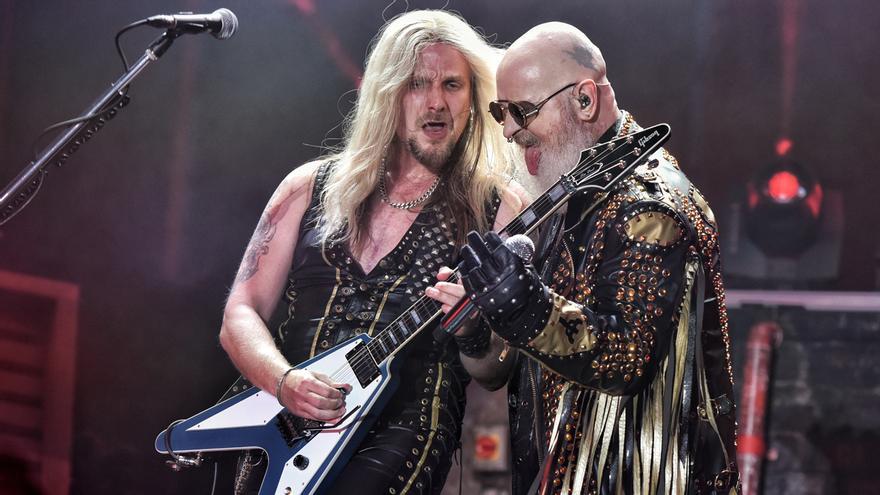 Metal will continue to be that media outcast, the object of chronic neglect, but You have to see the crowds that continue to gather, using pachyderms from the industry such as Judas Priest, a British band that celebrated this Saturday his ’50 Heavy metal years’ in the recovered Rock Fest appointment before an audience that exceeded 23,000 attendees. ‘Metal heads’ of varied sensibilities, of more classic or more extreme tastes, almost all sharing textile codes (black shirt with group logo, vaqueros) and attentive to a program that, on its last day, offered other appreciated claims, such as Megadeth and Doro, the former singer of Warlock.

With Judas Priest, heavy metal became flesh (and leather and studs) with all the honors and the aura of warriors hardened in a thousand battles. Theirs cannot be softened by that of age, and Rob Halford (71 years old), the singer, had the most demanding part of him, forcing his vocal cords even the most elusive treble. Placing two songs from the most extreme album, ‘Painkiller’ ´(1991), as the portico and closing of the ‘set’ (‘One shot of glory’ and the title), was a sign of his criminal intentions.

Stepping on the accelerator, they dropped ‘You’ve got another thing comin”, the tongue twister of ‘Freewheel burning’ and the play of synthesized guitars, in its day much discussed, of ‘Turbo lover’. Halford was successful, though abusing a little the resource of making the choruses sing to the public. The heavyweights plummeted: ‘Victim of changes’, the dynamite versions of ‘The Green Manalishi’ (Fleetwood Mac) and ‘Diamonds & Rust’ (Joan Baez).

Seeing Judas Priest without KK Downing or Glenn Tipton is still weird, but the latter, removed from tours since 2018 due to Parkinson’s but still an official member, came out, like four years ago, to participate in the encore. His colleagues reserved for him nothing less than ‘Metal gods’, an imperial theme to which Tipton, looking weakened, imprinted his character with the six strings, on the way to ‘Breaking the law’ and ‘Living after midnight’. God of metal, despite everything, with fans at his feet.

Step to the ‘metal queen’

His was not the only metal orthodoxy of the day: there he was the Valkyrie Doro Pesch, one of the first women to mark territory, in the 80s, in an imaginary as masculine as ‘heavy’. The German ‘metal queen’ showed off vocal might, turning to festival-appropriate tracks like ‘Raise your fist in the air’ and formulating her own take on the ‘power ballad’ on the keyboard-driven, martial ‘Für immer’. before saying goodbye by invoking his old group, Warlock, in the speed metal hint of ‘Hellbound’ and the anthem ‘All we are’.

And another brand with stripes, Megadeth, brought the thrash substance. While waiting for that album, ‘The sick, the dying… and the dead!’, which should be released in September, the Californians proceeded to sweep their record label, combining echoes of thrash with a simpler metal and progressive streaks in ‘ Hangar 18’ and the tortuous ‘Holy wars… The punishment due’, inspired by the religious wars and the Irish conflict. His was always an anti-war metal, as ‘Peace sells’ recalled: “peace is for sale, but who’s buying it?” Dave Mustaine roared over a thunderous double bass drum beat. Surprise: furious version of ‘Four horsemen’, a theme that Mustaine wrote for the first Metallica album, ‘Kill ’em all’.

Last noble fringes, waiting for the closing with Kiss, of a Rock Fest that early Saturday morning hosted the power metal of Blind Guardian (without one of the guitarists, Marcus Siepen, down due to covid), and the gothic fantasy of Mercyful Fate , with a rearmed King Diamond in front. This Danish band sank roots in their two albums from the 80s and offered a new song, ‘The jackal of Salzburg’ (the first in 23 years), very close to their essence. Metal with power, black or thrash prefixes, unfolded during the three days of this miracle Rock Fest, revived and with my sights already set on 2023.