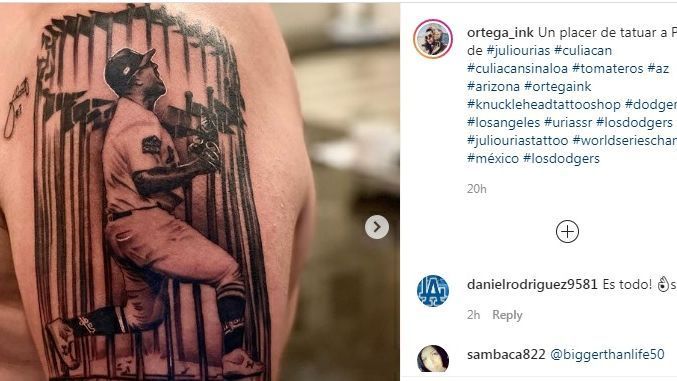 Carlos Urías commemorated the play where his son, Julio, got the last out for the Dodgers World Series title

Carlos Urías, father of the Mexican pitcher for the Los Angeles Dodgers, Julio Urías, a tattoo was done on his left arm, commemorating winning the World Series won last fall.

The image shows the celebration of Julio Urías after taking the last out in the 2020 Major League Baseball World Series, in which the California team beat the Tampa Bay Rays in six games.

Through his social networks, the tattoo artist ‘Ortega Ink’ shared the images showing the tattoo made to the Mexican pitcher’s father, as well as a photograph where the father is showing his tattoo with his son and the tattoo artist, Andrés Ortega Rojas.

Ortega Rojas, originally from Phoenix, Arizona, has become Julio Urías’ tattoo artist, which is why he was commissioned to capture the emotional image in his father’s arms.

Mexican pitcher Julio Urías, 24, played a key role for the Dodgers by winning the franchise’s seventh-first World Series, a title not held since 1988.