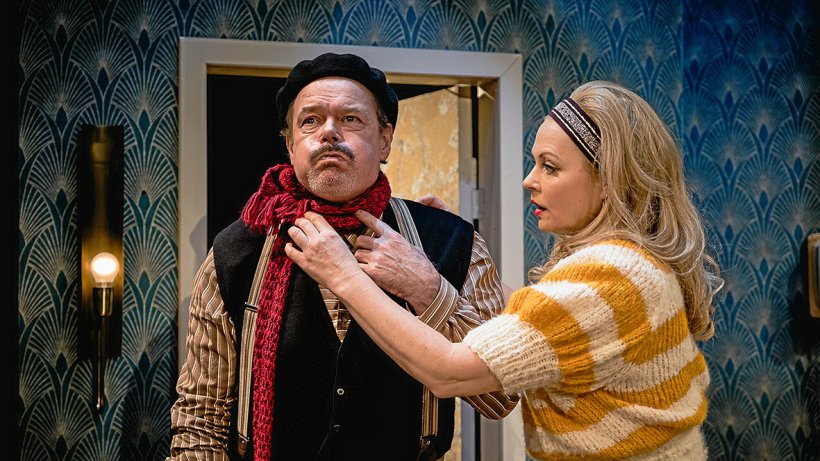 Nice joke: “Just a moment” at the Renaissance Theater

Just let go of everything and emigrate to Alaska with Simon, the strange boy next door. Just forget that the premiere starts in three minutes and only think about Julien. That would be the best. Believes Suzanne, who is already wearing the elaborate Rococo costume. All that’s missing is the powdered wig – and Marie Jeanne, King Louis XV’s mistress, is ready. For Suzanne the chance to return to the theater and thus to life with a brilliant lead role. But she hesitates. Not only because stage fright drives them crazy. But also because she knows that everything will change with this new beginning. And she finally has to let go of her great love, the fatally injured Julien, after more than a year.

Whether Suzanne dares to take this step will only be revealed at the end of Fabrice Roger-Lacan’s new comedy “One more moment”, which now premiered in the Renaissance Theater. His first and second pieces, “Der Krawattenclub” and “Irresistible”, were also very successful on the repertoire of the Charlottenburg stage. The French playwright was now present for the German-language premiere and was able to convince himself that host Guntbert Warns staged his soulful play in an extremely entertaining manner and with a fine wit.

The deceased man is always present

Right at the beginning, in Suzanne’s chic Parisian apartment, the lively French tone almost belies the fact that the beautiful diva is in a life crisis. Because she imagines her deceased husband Julien (Max Urlacher) in every situation. She had a perfect, harmonious marriage with the director, raised a son and celebrated countless professional successes. Now she is discussing with him whether she should wear the sexy dress for the visit of playwright Max (Martin Schneider) or the factual sweater. Of course, Julien advises her to do the latter. And he clearly refuses to accept the highly clumsy advances that Simon (Moritz Carl Winklmayr) makes her, her son’s wonderfully contaminated kindergarten friend. He moved in as a subtenant and fell madly in love with Suzanne.

When Max finally shows up, Suzanne realizes that she shares an old story with him. Even more: she forgets about Julien during the intensive work with him. And suddenly you find yourself in a dilemma. Susanna Simon knows how to let the tragedy of her character shine through. Despite the omnipresent situation comedy, which is created by Julien’s presence and jealous reaction to supposed rivals. Beneath her cheerful, distant surface, she wrestles with herself whether she should start something again at fifty and live with skin and hair for her art or sink further into her grief. Not that easy, because Julien, Max and Simon keep chatting into their thoughts. A wonderful comedy with depth and quiet humor.